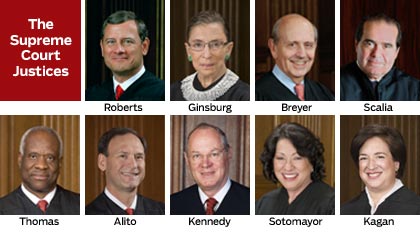 Collection of the Supreme Court of the United States

The nine justices of the U.S. Supreme Court 2011: Their opinion matters.

A tourist outside the Supreme Court's public cafeteria once handed a tall, gray-haired man a camera and asked him to snap his family's picture. The gentleman obliged without a word, and the tourists went on their way, totally unaware that the man was Justice Byron R. White.

See also: Which cases will affect you?

The story, a favorite of former New York Times reporter Linda Greenhouse, illustrates the peculiarly private world of the Supreme Court and the nine powerful men and women almost nobody knows.

Who are the men and women who decide matters great and small? A thumbnail sketch:

Former Justice John Paul Stevens, who spent nearly 35 years on the court before retiring last year at age 90, told C-SPAN that he was never recognized outside the courtroom — except once. That was in a video store in Florida, and the shop's owner had recently been admitted to the bar.

As the nation's highest court begins its 2011-2012 term today, only 15 percent of Americans can name the chief justice — John G. Roberts Jr., who is beginning his seventh term. Twice as many Americans know Randy Jackson is a judge on American Idol , according to a survey by the Annenberg Public Policy Center of the University of Pennsylvania.

In the last six years, the Roberts court has shown itself to be more conservative than any in decades, more pro-business and highly protective of free speech, scholars say.

The justices may seem distant, but their reach is as close as your TV, literally. One of the 80 or so cases the court will hear this term centers on indecent speech on television. The court may finally decide in Federal Communications Commission v. Fox Television whether a woman's bare bottom and fleeting "F-bombs" are acceptable on broadcast television when children might be watching. Any case combining scenes from NYPD Blue and celebrities using bad language is bound to garner media attention, but the court is poised to consider other issues with far greater impact on American life.

Next: Liberal and conservative views of the justices. >>

After adding four new justices in five years, the court is stable with no retirements announced or rumored. The oldest justice, Ruth Bader Ginsburg, 78, a cancer survivor, recently slid down the escape chute of an airplane after the pilot detected engine problems; she made a speech the next day.

Ginsburg is far and away the wealthiest justice with assets of $10.7 million to $45.4 million, in 2009, according to the Center for Responsive Politics, which has analyzed the justices' financial disclosure reports. Like other public officials, justices report their assets in ranges.

Ginsburg, who launched the ACLU's Women's Rights Project in 1971 and served as general counsel of the ACLU, is a leading liberal on the court. She was confirmed in 1993, though in a recent speech at Southern Methodist University, she said she doubts she could be confirmed today, given the fierce partisanship in Washington and glare of media scrutiny.

Justice Stephen G. Breyer, 73, was a Watergate prosecutor in 1973, and in 1994 became President Bill Clinton's nominee to the court. Breyer wrote Making Our Democracy Work: A Judge's View in 2010 because "I believe it important for those who are not lawyers to understand what the Court does and how it works." An architectural buff, Breyer also wrote the foreword for Celebrating the Courthouse: A Guide for Architects, Their Clients, and the Public. Last month, he was named a judge for the Pritzker Prize, the top award in architecture.

Justice Antonin Scalia, 75, who celebrated his 25th anniversary on the court Sept. 26, has served longest, is among the most conservative and has another distinction. Nominated by Ronald Reagan, Scalia was confirmed unanimously by the Senate.

"I don't care if you were Solomon himself, you wouldn't be confirmed unanimously these days," because of the bitter partisanship on Capitol Hill, said Brian T. Fitzpatrick, a law professor at Vanderbilt University, who clerked for Scalia.

Clarence Thomas, a reliable conservative during his 20 years on the court, is known for his silence. Thomas has not asked a single question during oral argument in more than five years. He's outgoing and loquacious in public events, however, complaining recently that Congress and the White House leave too many hard decisions to the Supreme Court.

"Our role is too great. I don't know any more about these big moral questions" than other people do, Thomas said in Lincoln, Neb.

Thomas, 63, of Pin Point, Ga., the only black justice, also objects to the court's Northeastern tilt.

"There's nobody from the heartland," Thomas said in Lincoln, suggesting it would do the court good to sit in session outside Washington, D.C., occasionally.

Also on the court's right wing is Justice Samuel A. Alito Jr., 61, who joined the court in 2006 after a contentious confirmation process. Appointed by President George W. Bush, Alito worked in the Reagan Justice Department with Attorney General Ed Meese before becoming a federal judge. He credits his father, an Italian immigrant who escaped poverty through education and held a longtime position with the New Jersey state legislature, with his approach to the law.

Anthony M. Kennedy, 75, a Reagan appointee, joined the court in 1988 and has become the pivotal link between the conservative and liberal wings of the court, often providing the one vote needed for 5-4 majority opinions.

Kennedy often considers foreign laws when interpreting the Constitution, a practice that has brought him the hatred of the political right. James Dobson, founder of Focus on the Family, in 2003 called Kennedy "the most dangerous man in America."

Kennedy says there's a Know-Nothing aspect to the criticism. No scientist would be censured for referring to relevant scientific studies from other countries, he says, and foreign law, while not binding, can be helpful in analyzing approaches to legal issues.

While the majority of the court's members may have Northeastern roots, there's more gender diversity than ever. Three women are on the court, including the first Latina. Sonia M. Sotomayor, 57, a self-described "Newyorkian," was born to Puerto Rican-born parents who moved to the states during World War II. Sotomayor, who joined the court in 2009, has said a judge's personal experiences "affect the facts that judges choose to see."

The court's written opinions are thought to be so complex that only a lawyer can understand them, but that's not always the case. Some opinions are lively and surprisingly vinegary. Scalia last year blasted an opinion by Sotomayor as a "gross distortion of the facts," "utter nonsense" and "unprincipled."

While their rhetoric makes it seem that the justices are at each other's throats, Elena Kagan, who joined the court in August 2010, says it's not so. The former dean of Harvard Law School says she was surprised "just how warm everybody is, how collegial." Kagan had to recuse herself from a third of the cases last year because of her previous work as solicitor general, the federal government's lawyer that represents the presiding administration's interests before the court. She is expected to play a larger role this term.

"If you're going to be somewhere a long time, it makes you appreciate congeniality," Kagan, 51, said in a video interview at the Aspen Institute.

The first call she got after her swearing-in ceremony was from Roberts.

Marsha Mercer is a freelance writer who covers public policy issues. She is based in Virginia.