Kendra Bell turned 50 a year ago, and soon joined AARP. No surprise: AARP membership is almost a given in her tightly knit family. Nancy Bell, Kendra's mother, who's 76; and Kendra's lively grandmother, Lucy Elliott, 96, are also members — Lucy since 1979. "That's what my card says!" she declares.

Join the discussion: Grandma got a tattoo, would you? 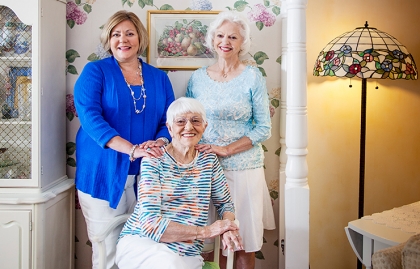 Kendra, Nancy and Lucy responded to AARP's call for families with three generations of members. Like her daughter, Nancy Bell joined soon after she turned 50, and Lucy, who lives with another daughter in Butler, Mo., remembers sticking an AARP membership sign in the window of her motor home years ago to get discounts at campgrounds.

The women gathered recently for a photo shoot at Nancy's North Kansas City home, the same modest split-level ranch where Kendra grew up with her brother, Eric, and sister, Kathy, who died from breast cancer. Five miles up the road is North Kansas City High School, which the whole family attended — including Kendra's son and daughter.

It's clear the family is close: Kendra, now a school administrator in Tucson, Ariz., says that when she was young, her aunt and cousins lived on the same street, and everyone would go camping together, play kick the can and have whiffle ball tournaments. "It was the best childhood anyone could ever have," says Kendra, who calls herself "Lucy's girl," because she has the same assertiveness as Grandma Lucy — and not her mother's more gentle manner.

Kendra's dad (Nancy's husband, Hiram) died three years ago, striking a blow to a family still mourning the passing of Kathy. The losses made Kendra assess her priorities, she says, and are part of why she had little ambivalence about joining an organization for older people so soon after her 50th birthday. She explains that she's come to feel grateful for her later years: "You go through such grief, you just come to decide how blessed we are in life .... And you know, growing old is part of the whole of living life."