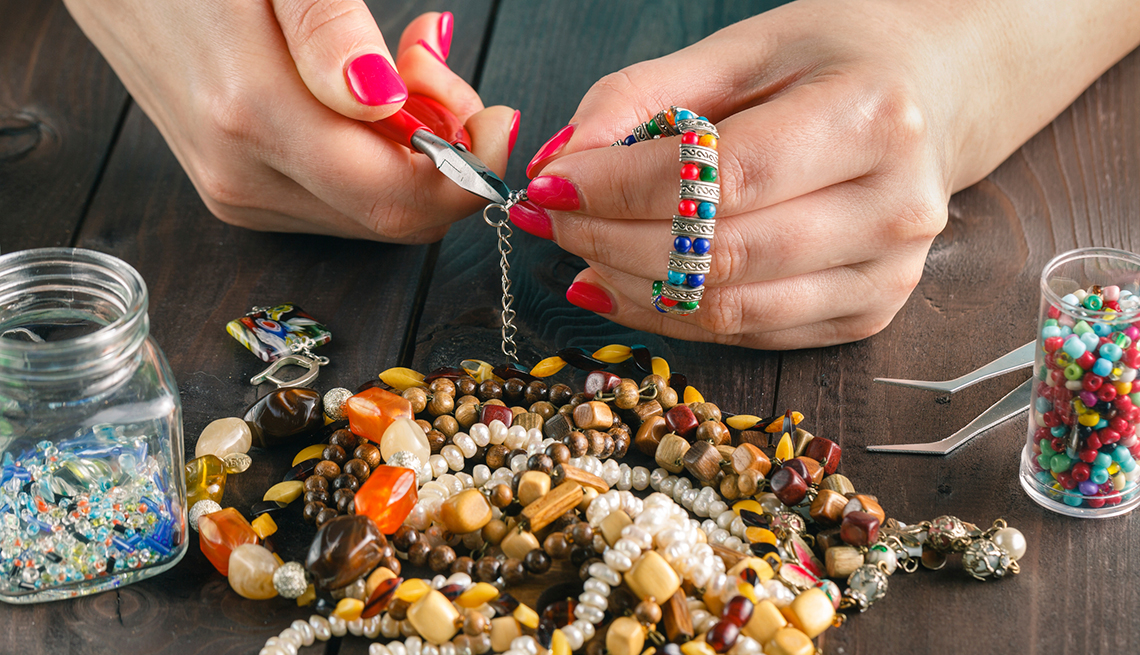 If you're creative, your talent could take your career in a whole new direction.

Ann Marie Hodrick was a freelance video news editor in her previous life, but as that work started drying up, she turned to her original love: making things. She soon launched her business, Heart's Desire Jewelry, selling her handcrafted, wearable art.

"I love that it's art to wear," says Hodrick, 55, who is based in Oakland, Calif. "It's a great way to play with color and helps to make the world a more beautiful place."

Hodrick is among the many creative entrepreneurs 50 and older who are launching second or third careers by selling arts and crafts. Making and selling their creations offers a way to tap into creativity, explore long-held passions and make some money. Here are some strategies to help increase your chances of success.

Tap into your strengths

Finding the focus of your business is step one, and starts with considering what you most enjoy creating. Do you like to paint? Work with wood? Sew? Now is your chance to breathe new life into those interests.

"Your age is an asset," says Diane Altomare, an integrative life coach and author of Clarity: Ten Proven Strategies to Transform your Life. "With every year, you have gained wisdom about yourself, others and life in general. You have traveled many miles and learned a lot on your journey." You can apply that wisdom to your art.

Hodrick discovered her passion for jewelry-making when she began doing it as a hobby. "I started beading with a friend as a social thing to do and then quickly became interested in taking classes and learning new techniques," she says. "Because jewelry-making takes up very little space, and it's a medium that I can work on in small increments of time, it fit well into my life."

Set aside time to focus on business

Although tapping into your passion is a vital part of building a craft-based enterprise, translating this passion into a successful business takes an understanding of sales and marketing as well as plenty of hard work. Altomare says it's important to see your business as a business, and to set aside the time and space you need to make it successful.

Hodrick used this approach as she built her jewelry-making business. "Without the structure of having to go into an office at a specific time, I found myself puttering around doing tasks and surfing the web, but not putting a priority on what my business needed," she says. "To self-correct, I rented a studio so that I had an office to go to, and I put everything on my calendar — simple things like a reminder to order supplies — so that I don't waste the day."

"Being creative is an amazing gift," Altomare says. "The downside, however, is that it can be difficult to switch from being creative to focusing on business, marketing and sales." That's why she recommends creating a routine that involves setting aside time each day to focus not just on the creative side of your business, but also on marketing your work.

Starting small can lead to bigger success. Begin by selling to friends and family, getting a table at a local craft fair or exhibiting at your county fair. This regional audience will provide support as you expand your business. You can also list your creations on e-commerce sites, including Etsy, eBay and iCraftGifts.com. Don't be afraid to spread the word about your work on Facebook or at local art shows. You can be your own best marketer.

Stay on top of your money

You'll also want to be careful with finances. Since making crafts might feel like a hobby, it can be easy to overspend. But experts recommend resisting that temptation.

"Be diligent about watching your bottom line," says Denver-based business coach Marianne Pestana. "Look at where you're falling every month in expenditures and try to keep the initial money that you're spending on supplies as low as possible."

See also: The smart way to start a business

Pestana also says it's important to be patient, especially as you're starting out. "It usually takes two years to get a business off the ground," she says. "Don't go into it thinking this is a get-rich-quick scheme."

For over a decade, Maple Smith, a 74-year-old retired teacher in Ithaca, Mich., has been raising alpacas on her farm, spinning their fleece into yarn that she dyes and sells to customers around the world through her business, North Star Alpacas. It's hard work, but her passion for the craft remains strong.

"I love that I am creating something beautiful from the critters in my backyard," says Smith, who's been featured on the TV series A Craftsman's Legacy. "I feel a strong connection with each animal as I am spinning. I love being able to knit a hat and recognize the animal that donated the fleece for it."

Smith says it's important for would-be artisans to believe in the value of their handiwork, and to be persistent in finding a market for it. "Many handcrafters undervalue what they are creating and undersell themselves," says Smith, who earns enough from her yarn sales to cover expenses and turn a profit. "My advice is to price your items high enough to cover your time and materials. There are many folks who appreciate handmade and are willing to pay what something is worth."