En español  | After Bruce Fallis, now 61, retired as a captain from the Texas state police in 2008, he and his wife, Marcia, 63, hiked the Appalachian Trail from Georgia to Maine.

They prepared for the five-month, 2,180-mile trek for nearly a year. When they finished, they went home to Plano, Texas, and realized, as Bruce recalls, "We need something to do."

Today they volunteer every Friday with a faith-based group called Plain-O Helpers — "seniors helping seniors" — performing such tasks as hanging ceiling fans, repairing fences and mowing yards. Each December both work at Plano Santas, a monthlong drive for food and toys for needy families. And four times a year they volunteer at Family Promise of Collin County, a network of 13 churches that helps homeless families.

"I remember this from Sunday school," Bruce says. "The first third of your life you serve yourself — education, job, growing up. The second third you serve your family — a career to raise your kids. The last third you need to serve others."

More and more retirees are feeling the need to give something back. "I believe that spirit universally touches and moves our lives through the purpose journey from cradle-to-grave," said Richard Leider, of the AARP Life Reimagined Institute. "I believe that each person has a spiritual reason for being and that our world is incomplete until each one unlocks and lives her or his purpose."

Some say they're called upon by God to serve. Others describe their motivation as spiritual but not directly religious. Still others say they get involved simply because it makes them feel good. "Life isn't complete unless you can help others and try to make a difference in your community and around our great country," Marcia says. "We personally get more out of it than those we serve."

Here are the stories of people who have felt a calling to give of their time, energy and experience in a variety of ways after they call it a career. 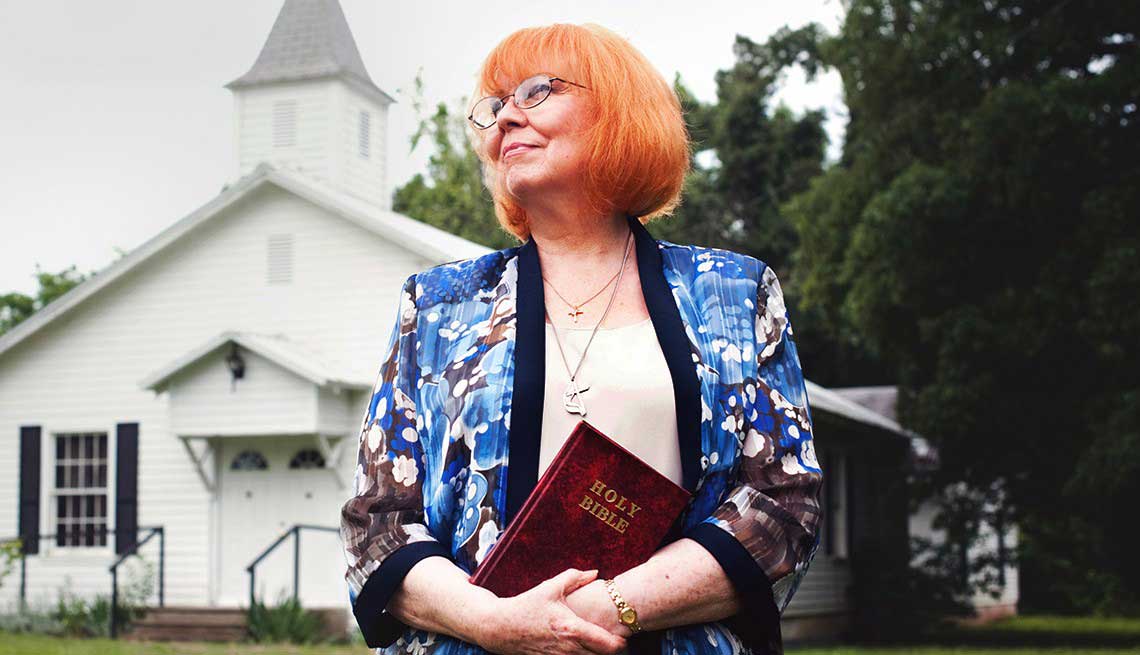 Cheryel Lemley-McRoy, 68, after retiring from a medical career, said she didn't pursue a religious vocation: "It pursued me."

After a career in the medical field, this 68-year-old woman — once a hippie in California during the "Summer of Love" — is now a Methodist lay speaker for two churches in rural east Texas.

She is a liturgist, writes the weekly bulletin, visits shut-ins and nursing homes with communion, preaches sermons and studies Hebrew online. In three to five years, she hopes to become the congregation's first lay pastor. "I'm a listener," she says. "I don't want to hit you over the head with the Bible."

Lemley-McRoy says she didn't pursue a religious vocation after she retired from her medical jobs in Dallas — "It pursued me."

She vividly remembers "when I was saved at 8 years old. Right away, I felt I was called to preach."

There were detours. She was born and raised in Pasadena, Calif., and as a teen became pregnant. "I decided to raise my baby to know and love the Lord," she recalls.

She went to the Hollywood Presbyterian Church where the pastor, Don Williams, told her that Jesus loved her. That was the first time she'd heard that. "I just broke down and sobbed," she says.

After her first marriage ended, she moved to Dallas and worked as a medical assistant for several physicians. Eighteen years ago she met her current husband, Ron McRoy, and they moved to a remote rural area east of Paris, Texas, south of the Red River.

"I wanted to quilt, garden and work on my genealogy," she says, but the local pastor urged her to become a lay speaker. "I reluctantly accepted," she says.

Her preaching has been helped by an earlier stint in broadcast journalism, which she studied in college. She worked for various TV outlets in Los Angeles and took speech lessons. Then "God led me from Hollywood to rural Texas."

Nothing worthwhile is easy. That's the mantra of Ed Schrock, a former U.S. congressman and state senator who's now executive director of the Shepherd's Center of McLean-Arlington-Falls Church in Virginia. The center, which is one of several in the U.S., gives rides to seniors who need to see their doctors, fill prescriptions, attend therapy sessions and make other essential trips.

The center is run completely by volunteers — retirees who want to do something good, says Schrock, who also spent 24 years in the Navy. The center has been operating for eight years, and he estimates that it will provide older people more than 2,000 rides this year. "Many seniors want to age peacefully," he says.

One of them is Liz McRaney, 73, who lives in Falls Church. She deals with some health issues, uses a cane and hasn't driven in years. She tried public transportation, but service was spotty. Now the Shepherd's Center takes her where she needs to go. "They're very caring and compassionate," she says. "They're my friends — I went out to lunch with a new driver. It's a faith-based service they're performing."

See also: Now, for my next act...a career change

Patrice Mauck, a retired Marine living in Arlington, suffers from a cornea disease that prevents her from driving. So the 65-year-old leans on the Shepherd's Center for trips to Walter Reed Army National Military Medical Center. "It's unusual in that it really fills a need," she says. "They're very focused on the needs of an individual person."

Thousands of seniors are grateful that the Shepherd's Center takes them for a ride. 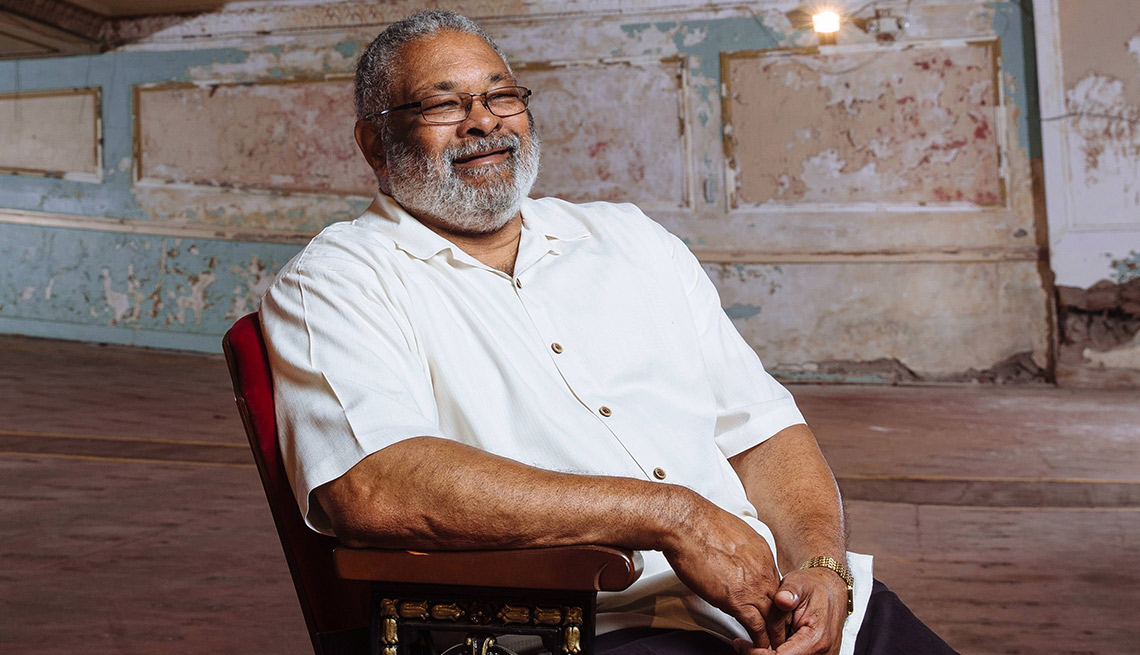 Lonnie Williams started a foundation dedicated to pulling others up.

As a boy, Lonnie Williams loved to go to the Jayhawk Theatre in Topeka, Kan. He enjoyed the cartoons that ran before the main feature. He liked the western serials — Lash LaRue, Buffalo Bill, Geronimo. The feature film Frankenstein freaked him out.

As a black kid in the 1950s, Williams had to sit in the balcony of the theater. He attended grade school with Linda Brown, whose father was one of the plaintiffs in the landmark Supreme Court decision Brown v. Board of Education.

For the last three years, Williams has spearheaded a movement to restore the Jayhawk Theatre to the prominence that it had achieved after opening in 1926. Bob Hope, Gypsy Rose Lee and George Burns all appeared on its unique proscenium stage, under a painting of the goddess of agriculture.

Williams, who founded his own firm, L&J Building Maintenance, in 1986, understands the irony of a black entrepreneur becoming a driving force in a campaign to refurbish a theater that once consigned him to the balcony. But now, at 68, with his four children running his company's day-to-day operations, he knows the past is never past. "I came from a time when the races were separated," he recalls. "Now it's come full circle."

He was severely wounded as a soldier in Vietnam in 1968 and spent months convalescing at four hospitals. After bootstrapping himself into local and national prominence — he's been named U.S. Small Business Administration Minority Small Businessperson of the Year — Williams is dedicated to the spiritual work of pulling others up with him. He started Living the Dream of Kansas, a foundation that gives scholarships to minority high school students. He has helped two other small businesses get up and running.

And he's trying to restore an important part of his youth to its former grandeur. "Nearly everything I ever attended is gone," he says. "My grade school. My junior high. The rec center where I used to play basketball has been torn down. The Jayhawk is still here."

When he was growing up in Larned, Kan., Rich Yeager knew a husband-wife team of doctors. Every so often they went to Africa to perform eye surgery on patients. That stayed with him.

After a career as a vascular surgeon at the VA hospital in Portland, Ore., Yeager retired a few years ago. By then his children were grown, he was still in good health and he was searching for a way to practice his faith and do good works.

Encouraged by his wife, Patsy, and both their sons, the 70-year-old volunteered to go to Cameroon through the African Academy of Christian Surgeons residency program, which is certified by Loma Linda University in California. It's a nondenominational group that trains African physicians to become surgeons if they will commit to staying in Africa after their training.

Besides helping African doctors train to become board-certified, Yeager also worked "out of my comfort zone" in general surgery. He performed numerous amputations because gangrene, trauma, ulcerations, foot infections and diabetes plagued many of his patients. "It was the best management we had" at the former hospital for lepers, he explains.

One of the hospital administrators in Africa told him that just seeing American doctors always encouraged him. "That made the trip worthwhile," Yeager remembers. "I'm a Christian, and this has been one of the best things I've ever done. When I come back, I feel I get more out of it than they do."