Join us at 1 p.m. ET Thursday for a live town hall on COVID boosters, vaccine efficacy and staying healthy. Find out more.

Love the outdoors and have wanderlust? Work camping might be the after retirement job for you.

En español | Debbie Ford, 61, has led tour groups through tide pools along the Pacific coastline, planted tomato bushes in Alabama and manned visitor centers in national forests from Colorado to the White Mountains of New Hampshire — all while living with her husband, Mark, 66, aboard motor homes the couple have called home for 14 years.

Known as work campers, the Fords are among tens of thousands of older recreational-vehicle wanderers who are stretching pensions and savings by taking seasonal jobs with public and private employers, earning not only their campsite fees but often a paycheck. The most popular gigs are as hosts, housekeepers and maintenance workers at campgrounds and government-owned parks. Many also work at NASCAR tracks, wildlife sanctuaries and Amazon fulfillment centers. Christmas tree lots and pumpkin patches are popular, too, and one California lighthouse has its camper-keepers booked through 2015. "I've even heard of campers volunteering to catch pythons in the Florida Everglades, but I draw the line," Ford says, laughing. 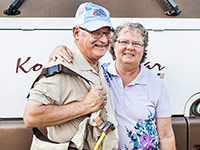 While no one knows precisely how many work campers are crisscrossing America, Stacey Iverson Huck, training and events manager for Billings, Montana–based Kampgrounds of America Inc. (KOA), one of the largest employers of working campers, says the company's corporate and franchised resorts employ about 1,500 couples per year. And Steve Anderson, president of Workamper News, a subscription-based magazine, website and jobs-listing service for working campers, says he has about 14,000 members and runs thousands of employment ads at any given time, and that those numbers are growing.

They include Bill Gross, who, with his wife, Jan, has been a working camper since 2012. The couple, both 59, used the proceeds from the sale of their house to purchase a 42-foot "toy hauler" trailer with garage space for Bill's motorcycle; they use the bike to explore on their days off. Other campers rely on cash savings, pensions or Social Security income to augment modest wages.

Pay varies by employer, but most offer a free campsite and hookups for water, electricity and waste disposal; some include free Wi-Fi and cable TV. Campers generally work a set number of hours apiece in exchange for a place to park their rig, plus additional hours — usually at a minimum wage starting at $7.25 an hour — for a total of 20 to 25 hours a week.

Amazon, for example, provides free campsites and hourly pay (about $10 an hour, plus overtime ) for participants in its CamperForce program, which features seasonal jobs in the company's warehouses across the country. Some employers offer such perks as free passes to area attractions; KOA lets employees who fulfill a seasonal assignment camp for free for several nights at other KOA campsites when they're en route to the next job. Angie Dickerson, manager at their Branson, Missouri, site, says the work often involves cleaning bathrooms, emptying trash and other unglamorous tasks.

"It's a great way to see the country," she says. "But we do try to emphasize that 'work' comes before 'camper.' " 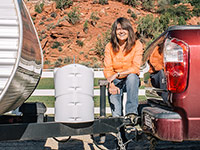 Not everyone is looking for cash: The Fords, for instance, also do unpaid stints with service organizations such as NOMADS, a United Methodist Church mission that rebuilds in storm-damaged areas or provides other philanthropic aid. A rudimentary campsite generally is the sole compensation, yet that allows the couple to get around the United States at a low cost and to do volunteer work that offers a sense of community, says Debbie Ford.

See also: Saving the world as a second career

Work campers tend to travel as pairs — married empty nesters looking for a way to mesh their wanderlust with a practical way of funding it. Employers prefer couples because they get two workers per free campsite, but single working campers are on the rise, says Anderson. Experienced work campers say that if you're reliable and add value, many employers will waive the two-person preference and hire solo RVers.

"I haven't found it difficult to find work as a single," says Michele LaForest Gray, who in 2011 dealt with a milestone birthday by purchasing both a truck and a 19-foot travel trailer with most of her savings.

After a three-month whirlwind trip to see dozens of attractions on her wish list, she couldn't stand the thought of returning to her stationary life as a social worker in Louisiana: "I called a campground in Pennsylvania and got hired over the phone," she says.

LaForest Gray, 58 — who recently published a book, Little Big Life, about her transition into the work-camping realm — has worked jobs in upstate New York and Pennsylvania; she's now in Utah.

The trailer is her permanent home, and, she says, "I go back to social work intermittently to refill my bank account" between work-camping positions.

"I feel like I've opened up the country to myself — in the trailer I can afford to live places I couldn't have imagined — and I didn't have to have a ton of money to pull it off," she says.