En español | Juanita Vigil, 51, wanted to be her own boss — but without all the risks associated with starting her own business. So she and her husband bought a Jiffy Lube franchise.

She's not alone. The number of Hispanic-owned businesses in the United States is projected to reach 4.3 million in 2016, a 40 percent increase. And in these spotty economic times, franchising is a business model that is increasingly making more sense. 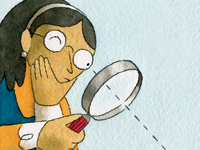 With a franchise, you have a template to launch and run your business, ongoing technical support and (often) a recognizable brand.

Still, as Vigil quickly learned, after opening the door to your own Jiffy Lube, Subway or other brick-and-mortar or service establishment, you'll have plenty of work ahead.

Besides your passion and money, you will also need a suitable lifestyle and relevant experience. No franchise formula fits everyone. Rather, you need to fit the formula.

Even then, it's a delicate dance.

5 Factors to Consider in Choosing a Franchise

5 Steps to Get Started

5 Red Flags to Watch For

You have to choose wisely, considering the type of business, fees required, expected rate of return, location and more.

"You need all the right elements," Juanita says. For her, staff was key. "Once you have the right people, the rest is easy." She had 12 years of experience owning an online travel company and was ready to try something new. Her husband, Celauro, 64, loved fixing cars, and her brother, Salvador Canales, 38, worked at Jiffy Lube for years. And, like many Latino entrepreneurs, the Vigils value an enterprise that can also function as a family business: Celauro oversees the operation; their daughter, Eunice, 23, handles the finances; Salvador manages the store day to day; and Juanita does the administrative work.

To learn the basics, Juanita took a free seven-day chamber of commerce course. Latinos can also seek assistance from the International Franchise Association's MinorityFran program, which offers access to education and opportunities to explore offerings of companies actively looking to recruit minorities. And some franchises — like Burger King, Domino's Pizza and Liberty Tax Service — offer minority programs, which can include everything from recruitment to education to special financing offers.

Rob Bond, who is a franchising specialist, hesitates to label some franchises more Latino-friendly than others. "Franchises are almost impossible to compare," says Bond, who compiles the annual "Top 26 Franchises for Hispanics" for Poder360, a business publication covering the U.S. Hispanic and Latin American markets. Poder360 considers costs of entry, products or services that are especially recession-proof and proven systems that provide excellent ongoing support. Among the 2010 list of companies are restaurants and hotels, cleaning services, tax preparation and learning centers.

Most franchise buyers are in their 30s and 40s. "Someone 55-plus is probably going to have a difficult time with the year-to-year fluctuations in income," says Bond. "For those people who are betting the ranch, they'd better do something they're very comfortable with and have expertise in. Otherwise they could end up destitute."

Match the business with your expertise or passion.

The only reason Manuel Fernandez didn't end up destitute is that he didn't have the stomach for acquiring additional debt. After less than three years, he sold his Minuteman Press franchise in 2007 at a loss.

Given his experience in financial management, Fernandez believes that he may have fared better if he had had stronger connections with the local print industry and expertise in marketing in that area. He now works as a project manager for a tech firm in Tampa.

Choosing a business within their expertise has made franchising a success for Blanca and Teodoro Quirino, 50 and 51, of Texas. In 2007 they bought a MaidPro instead of, say, Great Clips. Blanca, who worked as a hotel housekeeper for 15 years, knew what a high-quality cleaning service entails. Hair, not so much. "The first year, I was working about 10 hours a day," says Blanca, who didn't spend that time vacuuming but rather scheduling and hiring.

"Now, I work five or six hours a day. I want to retire before 70." She plans to buy two more MaidPro franchises and hand the businesses off to each of their three children.

Seek a company that offers a strong support system.

Ramiro Cruz, who is 55 and lives in Missouri, considered efficiencies when he chose his new franchise. He had been a project manager in information systems for 30 years, until he was laid off for a second time in 2008. A widower with a grown son, he realized he didn't need as much money to live on as he used to, he says. He mulled over handyman, pizza and IT companies. In the end, he chose CertaPro Painters because the company had a strong support system, and he could maintain a lean operation with subcontractors.

"I've given myself a five-year plan to get the business to a certain level, and then I'll see where it's at," he says. "If it makes sense, I'll sell. If not, I'll look at expansion. Ultimately, I'd like to have a business that runs itself." Or almost runs itself.

That's just what most franchise owners hope for.

Continue With 5 Factors to Consider in Choosing a Franchise >>

5 Factors to Consider in Choosing a Franchise

Continue With 5 Steps to Get Started >>

5 Steps to Get Started

Continue With 5 Red Flags to Watch For >>

5 Red Flags to Watch For

Getting Started and Accessing Capital

Identifying and Learning About Franchises