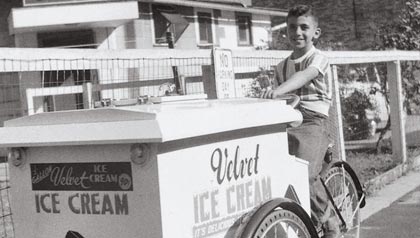 In September 2009, the Velvet Ice Cream Co. of Utica, Ohio, rang in its fourth generation of family leadership. Luconda Dager, great-granddaughter of the immigrant who in 1914 founded the firm in a confectionery store's basement, took over as president.

She's now in charge of day-to-day operations at Velvet's headquarters in a picturesque old mill, which is outfitted with a manufacturing plant, ice cream parlor, gift shop and museum and welcomes about 150,000 visitors a year. She took over from her father, Joe Dager, who became chairman of the board.

A proper succession plan made for a smooth transition. "It was well thought out and everyone in the family understood each other's roles," says Luconda, 41, the oldest of four sisters, three of whom work in a business that employs more than 100 people.

Devising a succession plan may take years of negotiating and fine-tuning and airing of issues that family members might just as soon ignore. But it's worth it. In the end, a viable plan will boost survival odds for the enterprise that is often the family's prime source of livelihood and pride.

A good succession plan lays out clearly the firm's future ownership and leadership, along with practical and legal steps for getting there. A plan should also detail how information will be disseminated to family members and employees during the transition.

"A decade is a good horizon, so that no one expects everyone to change their ways of doing things overnight," says Nancy Drozdow, principal of the Center for Applied Research, a Philadelphia-based management consulting firm. "There is an expectation of learning, making mistakes, regrouping."

Twenty-seven percent of respondents to a PricewaterhouseCoopers survey of family businesses in 15 global industry sectors foresee a change of hands within five years, and 53 percent of those companies expect to stay family-owned. But 48 percent of companies don't have a succession plan, and of the ones that do, only half have chosen their future chief. Released in November, the survey tapped more than 1,600 family proprietors and managers in 35 countries.

For many family business owners, the major issue is, "Do they transfer now or do they wait until they die?" says Tom Zanecchia, a wealth management consultant in Denver. "Generally, we do all this while the owner — the older generation — is still alive, so there are no surprises later."

But the senior generation may be reluctant to relinquish the reins. That's because it entails accepting mortality, observes Dick Emens, executive director of the Conway Center for Family Business at Ohio Dominican University in Columbus. He advises owners to complete and communicate a written succession plan by their 50s.

A well-crafted plan also minimizes taxes and "provides for the retiring generation without hobbling the business' need to grow and take risk," says Ira Bryck, director of the UMass Amherst Family Business Center in Hadley, Mass. Yet, "the plan is not a static thing that gathers dust on a shelf," Bryck says. It can be amended because "owners have irreconcilable differences, or the business isn't sustainable, or the investment and risk needed are too great, or the people involved are bored."

Disagreements between family members can escalate to catastrophic highs. Take, for instance, the case of L.S. Schoen, who in 1945 founded what would become the world's largest consumer truck-rental corporation, U-Haul. Profits plunged and relationships soured amid feuds involving his 13 offspring, a daughter-in-law's murder, lawsuits and financial meltdowns. Two of Schoen's sons bickered with their brothers and removed him as chairman.

A buy-sell pact in a succession plan can help avoid some of these problems. When the succession results in a partnership — for example, between siblings or cousins — it should include a value appraisal and buy-sell agreement in case someone decides to exit, says Don Schwerzler, founder of the Atlanta-based Family Business Institute and the online resource Family Business Experts.

Emens suggests that voting power should go to family members who will lead the business in the next generation. Too often, when a proprietor divides stock equally among children, siblings who don't work in the business may sell their shares. Instead, Emens would give voting stock to some and nonvoting stock to others.

Other points to consider: Forming an advisory board creates a safety net in the event of illness, disability, death or tough economic times. Training a successor prepares a capable leader to take the helm, Schwerzler says. And hosting family retreats and business meetings keeps people in the loop.

Crane & Co. in Dalton, Mass., holds a reunion at its annual shareholders' meeting in May. The corporation of 1,500 employees manufactures paper and security features for U.S. currency, as well as bank notes and passports for other countries. While strengthening family ties to the business and to each other, the gathering also helps bring new talent on board.

"As the family grows and moves out of Dalton, the family isn't as connected with the company as they used to be," says Charlie Kittredge, 58, chairman and CEO, a sixth-generation descendant of Zenas Crane, the founder in 1801.

The company has more than 100 shareholders and an 11-member board of directors. When Kittredge can no longer lead, the board will appoint the best replacement. "It's important not to favor an individual who's a family member over someone else," says Kittredge, adding that two former CEOs weren't relatives. "It's a meritocracy."

At Velvet Ice Cream — which sells 5 million gallons per year mainly in supermarkets and convenience stores — Joe Dager and his wife, Tatla, own 51 percent of the stock. Three daughters own a combined 49 percent. They acquired the business in 2005, when Dager's brother and then half-owner, Mike, wanted to retire. "All of us found our comfort area and what we're good at doing," says Joe, 70. "As we evolved, we had to make a few adjustments and changes, but we all decided we needed to assign new officers."

By age 72, Joe hopes to completely turn over the stock to his daughters. "They have to earn it, like I earned it," he insists. "You earn it as you move along in life."

One scoop at a time.

Susan Kreimer is a New York-based writer specializing in business and health.