En español | One hundred eighty-nine companies have earned spots in a new annual list of "Best Places to Work for LGBT Equality."

Compiled by the advocacy group Human Rights Campaign, the list honors employers for active nondiscrimination policies; a commitment to lesbian, gay, bisexual and transgender inclusion; and medical insurance and other benefits for employees' domestic partners. 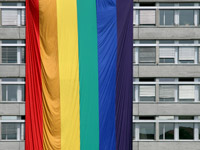 This year's list includes some nationally known companies — Apple, Nike, JP Morgan Chase are among them — as well as lesser-known companies such as Tech Data, Delhaize America and Medtronic. To get on the list, employers had to score 100 percent on a corporate equality index devised by the HRC.

"Generally, things have certainly gotten better for LGBT employees of all ages, including those over 50," says Paul Guequierre of the HRC, the nation's largest LGBT civil rights organization and lobbying group. But "although these findings are encouraging, a lot of work still needs to be done."

Some key findings of interest for older LGBT employees from the 2012 report:

The HRC's list draws on responses to surveys sent to companies on Fortune magazine's 1,000 largest publicly traded companies, to the top 200 revenue-grossing law firms in the United States, and to private-sector, for-profit companies with at least 500 employees.

The responses are then vetted through published employment programs and, when necessary, direct verification with human resources departments. Companies that don't respond may be evaluated by the HRC based on their written policies.

LGBT employees themselves are not surveyed, says Guequierre.

Of 1,737 companies invited to participate, 481 responded and 636 were officially rated.

"Older LGBT workers remember well when coming out of the closet was almost certain to get them fired from their job," says Gueguierre. "And workers over 50 often face discrimination based on their age as well as their sexual orientation or gender identity."

The Civil Rights Act of 1964 — the primary federal antidiscrimination law — makes it illegal to discriminate on the basis of race, sex, national origin or religion but does not specifically address sexual orientation or gender identity.

Less than half of U.S. states have laws protecting gay and transgender employees from discrimination.

Bias is especially an issue for the post-50 LGBT job seeker.

"As an older worker, it's harder to find a job. So it's even more important to be in a work environment where being gay or transgender won't be held against you," says James Fisher, 55, an openly gay senior manager at Booz Allen Hamilton, which made the 2012 list.

One factor in his decision to join Booz Allen Hamilton two years ago is that his partner of 25 years may retire first. "I wanted to make sure I would have the potential to provide health benefits for him," he said. "Knowing he's covered with my benefits when he retires helps me sleep better."

Sid Kirchheimer writes about consumer and workplace issues for AARP.org.