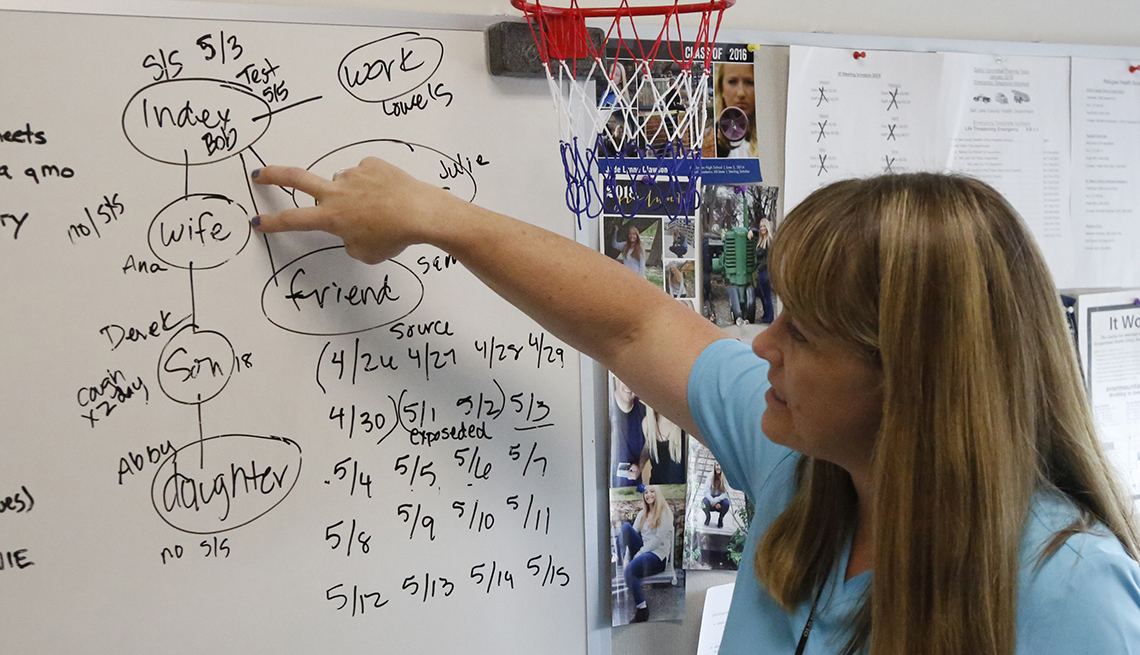 Lee Cherie Booth points to a board showing a hypothetical case that serves as a training tool to teach new contact tracers.

En español | As a contact tracer, Teresa Ayala-Castillo is sometimes asked whether herbal teas and Vicks VapoRub can treat COVID-19. These therapies aren’t exactly official health guidance, but Ayala-Castillo isn’t fazed. She listens and then suggests other ideas — like getting rest and drinking plenty of fluids.

“I don’t want to call them old wives’ tales, but these remedies are things that I’m 100 percent familiar with because my mom used them on me,” said Ayala-Castillo, a bilingual first-generation Ecuadoran American who works for the city of Long Beach, California.

Health departments across the U.S. are working at a furious pace to staff their armies of contact tracers to control the spread of the coronavirus that causes COVID-19. Experts estimate local and state health departments will have to add 100,000 to 300,000 people to get the economy back on track.

As they build these forces, many states and localities are striving to hire from the racial and ethnic minority communities hit hardest by the virus. They’re anticipating a need for skilled, culturally competent tracers who can convert suspicious or hesitant contacts into enthusiastic, willing participants in the drive to stamp out the virus.

Virus-tracking activities vary by state. Most states have created plans to add contact tracers through hiring or training volunteers, but wealthier ones — including California, Connecticut, Massachusetts, New Jersey, New York and Washington — are further along than others, said Marcus Plescia, chief medical officer of the Association of State and Territorial Health Officials.

Delaware, which aims to begin hiring in a month, plans to prioritize hires with bilingual skills from vulnerable communities. Minnesota is hammering out staffing contracts with diversity quotas that match the demographics of the state’s COVID-19 cases.

“One size does not fit all for making that first call and being successful in having them pick up the phone and have a good conversation,” said Chris Elvrum, a deputy incident manager at the Minnesota Department of Health. “We need to recognize that we have to approach it in different ways for different cultural communities in the state.”

Tracking the disease works like this: After someone tests positive for COVID-19, a case investigator from the local health department calls the patient to ask detailed questions about her health, movements and with whom she interacted over a certain time frame. A contact tracer then calls everyone the patient named to let them know they were potentially exposed to the virus. These contacts are instructed to stay home and self-quarantine for 14 days after the exposure. If they live with other people, the recommendation may extend to those individuals.

"You need someone to be a cultural broker, to say, Not only are these policies in place to protect you, but I’m telling you to trust me that this will be OK. I’m going to make sure you have what you need to safely quarantine."

— Kara Odom Walker, secretary of the Delaware Department of Health and Social Services

Under stay-at-home orders, it’s often relatively easy to figure out who may have been exposed to the disease, health officials say. Infected people usually have been around only family or close friends and will often warn contacts to expect a call from the health department, said Emily Holman, communicable disease controller for Long Beach.

But shoe-leather fieldworkers may be required in some instances, said Kara Odom Walker, secretary of the Delaware Department of Health and Social Services. “There are some communities that aren’t going to respond to a phone call, a text message or a letter,” Walker said. “That could be due to health literacy issues, which could be due to fear, or documentation status.”

So far, most people are following instructions, officials said. Holman estimates that fewer than 1 percent of those contacted in Long Beach refused to participate.

But some defiance is likely, especially among those who cannot work from home or are their children’s only provider, Elvrum said. People being notified about contacts with a COVID-positive patient might think the call is a scam, or worry the information will be shared with immigration authorities or cost them their job. Health departments do not have to turn information collected for medical purposes over to federal immigration enforcement, but it takes a sensitive, empathetic and knowledgeable contact tracer to explain this.

“You need someone to be a cultural broker, to say, Not only are these policies in place to protect you, but I’m telling you to trust me that this will be OK,” Walker said. “I’m going to make sure you have what you need to safely quarantine.”

Minnesota plans to dedicate 1,400 staffers to contact tracing by July, Elvrum said. Contracts with two companies involved in the hiring stipulate that they bring on people of racial and ethnic groups proportional to their numbers in the state or the percentage of positive COVID-19 cases in those groups — whichever is higher.

They’re seeking hires who speak Hmong, Somali and Spanish, said Kou Thao, director of the Center for Health Equity in the Minnesota Department of Health.

Virginia, which has 200 contact tracers and hopes to hire a total of 1,300 staff to support the effort, is looking for speakers of Mandarin, Haitian Creole, Spanish and Bengali, said Mona Bector, deputy commissioner for administration at the Virginia Department of Health.

The state has received more than 6,000 résumés for these positions, Bector said.

Long Beach prides itself on a diverse workforce that reflects the city’s population. Officials pulled their contact tracers and interpreters, including Ayala-Castillo, from municipal staff members who speak Samoan, Khmer, Tagalog, Spanish, Vietnamese, Mandarin and other languages to create a staff of 60. Their goal is to have 200 people trained and ready to deploy as needed.

Having workers who can speak to contacts in the language they prefer is a step forward, said Crystal Watson, a senior scholar from the Johns Hopkins Center for Health Security. Being able to extract information while being sensitive to patients’ concerns and mistrust is paramount, she added.

Sgt. Jairo Paulino, a 38-year-old member of the Delaware National Guard, is one of several bilingual guardsmen volunteering to help call COVID-19 contacts. When he started the job in mid-May, he noticed there was a “major backlog” of names because the state didn’t have enough Spanish speakers to reach out to everyone quickly.

Paulino was born in the Dominican Republic and moved to New York as a boy. He grew up translating for his father and attending church — both elements that help build trust in the Latino community, he said.

Poor access to the internet also poses a challenge. In Tulare, a rural county in central California, health workers ask patients to use an online portal to help streamline data collection on their contacts. However, 5 to 10 percent of people cannot get online, said Tiffany Swarthout, an administrative specialist at the county health department. In those cases, health workers will speak to the patient on the phone.

Employment concerns represent another tricky area for contact tracers. Some people they reach out to may hesitate to stay home because they are strapped for cash, especially if the pandemic has left members of the family without work, said Jody Menick, a nurse who supervises contact tracing in Montgomery County, Maryland, just outside Washington, D.C.

Some employers are requesting proof that patients and contacts were safe to return after quarantine, and some areas provide official letters that specify the worker’s quarantine period.

But undocumented workers — who have fewer protections than employees with legal status — have been pressured to show up to work in her area, Menick said, leaving them with a difficult decision.