En español | When the rumored pink slips finally landed at a midsize bank in Dallas, half the staff was wiped out. Alejandra Mendoza, one of the supervisors they let go, figured she'd find something soon enough.

How hard could it be to get back to work, she thought. She had 36 years of banking operations experience. Her professional reputation was unblemished. 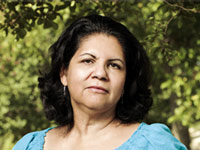 Alejandra Mendoza, 57, hasn't found a job in a year. Health insurance is a big worry.

Yet a year later, Mendoza, 57, is still jobless. Nearly 250 applications have yielded two interviews and no offers. She finds herself a statistic in a dispiriting trend: The unemployment crisis gripping the nation has fallen particularly hard on older workers.

"I really, really wish I could find something, even part time. It's been very frustrating and stressful," Mendoza says in the four-bedroom home in a Dallas suburb where she raised her now-grown children.

The jobless rate for people 55 and over remains lower than it is for the total labor force — 6.9 percent vs. 9.1 percent. That said, older workers are losing their jobs at a faster rate than the overall labor force; and joblessness for them has more than doubled since the recession began almost four years ago, according to the Bureau of Labor Statistics.

And the longer they are out of work, the harder it is for people over 55 to find something new. Government figures for August showed that younger job seekers had been without work for nine months on average; for older workers, the duration was roughly a year.

"It's always been harder for older workers to find jobs, but it's much more difficult now," says Sara Rix, senior strategic policy adviser at AARP. Many think they may never work again.

Given the choice, older workers have been opting since the 1980s to delay retirement, either for financial reasons or because they like working. But downsizing and layoffs are forcing scads of them into retirement before they are ready.

Mark Krieger, 61, was earning six figures as a business systems architect at a credit card processing firm near Fort Lauderdale, Fla., when he was laid off a year ago.

He's healthy, at the top of his game, but found getting interviews difficult. To make ends meet, he sold his house. "Obviously I can contribute," he says. He was still out of work in early September but was crossing his fingers over a promising job lead.

Bleak as things appear, job market experts say much can be done to improve an older worker's chance of getting hired again. There are government-subsidized programs in every state designed to help older workers find their way back in. (The Department of Labor's Career ­ OneStop is a good place to start.)

"I won't say there isn't age discrimination out there; there is. But a lot of it is how you present yourself, what you say and how you say it," says Don Zirkle, a training and placement supervisor at Mature Services in Ohio.

Next: Older workers bring wisdom, reliability to the job market. >>

Older workers tend to lack the formal credentials common among their younger counterparts — a four-year degree or certification of technical training, for instance.

When it comes to searching for work, they can be rusty. They come from a generation that held the same job for years, even decades.

And misconceptions about older workers abound: They get sick more, have poor attendance, expect high wages, lack ambition or are technology-impaired (a particularly galling stereotype for a generation that invented computers).

A study of female job applicants by Texas A&M economics professor Joanna Lahey found that, with all else equal, companies were more than 40 percent more likely to interview a younger job candidate than an older one.

That's why it is vital for older job seekers to get in the door, experts say. What they lack in formal credentials they can make up for in experience, wisdom and reliability. Five minutes with a prospective employer can dissolve misgivings about age.

"The younger generation often doesn't believe the mature worker has what it takes," Zirkle says. "What they find out after they hire one is that they do. Sometimes it takes a little longer for the mature worker to get into the groove of things, but once they learn, they usually turn out to be the top performers."

Three-week "job clubs" Zirkle runs are a veritable makeover for older job seekers. They teach how to search for work. (The majority of jobs are never advertised.) How to write a résumé that plays down age — put your skills and experience at the top, the years at the bottom. How to conduct a successful interview — keep most answers to 25 seconds.

"When people come to us, they have usually just about given up," he says. "We turn them around and say, 'Let's go get it.' "

That's where 59-year-old Pam Gaul was 17 months after a downsizing ended her job as an executive assistant at a company that made industrial fans in Akron, Ohio. A friend dragged her to a job club. She thought she had nothing to learn.

Next: Fighting the age barrier. >>

But then she watched a video of herself in a mock interview. "I was shocked," Gaul says. "My lips were pursed — I thought I was upbeat and smiling. When I was young my mother told me I didn't have a pretty smile, so I should make sure I kept my lips closed. I had to change that."

One of Gaul's homework assignments was to write a 60-second commercial about herself. Shortly after she finished the course, the Bridgestone Tire Company's Akron Technical Center called her for an interview. Asked why she was the one to hire, she did her commercial.

She's now an executive assistant again, still giddy a year later. She took a 17 percent pay cut and didn't care. "I tell people there I am the happiest person in this company."

Hard as it is to imagine in today's tight market, experts believe there is an expanding role for older workers in tomorrow's labor force.

"Foresighted employers are anticipating labor shortages," says Nicole Maestas, a RAND Corp. senior economist. "And one way to offset that is to keep your older workers employed."

And what do they have to offer?

"The answer," she says, "is experience."

<p>HOPEFULMark Krieger, 61, laid off a year ago from a six-figure tech job, may have an offer. "I didn't get any dumber with time on my hands," he says. </p>

Employers may be struggling to find good jobs for seasoned workers. Hank Jackson, CEO of the Society of Human Resources Management, offers a few pointers on how to break the age barrier and get hired: