Job growth stalled badly in May, the government reported Friday. Employers hired a paltry 54,000 workers, down from 232,000 in April, and the unemployment rate edged up to 9.1 percent. 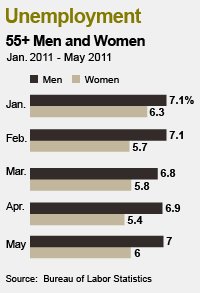 Workers age 55 and over were hit particularly hard, with their jobless rate rising to 6.8 percent from 6.5 percent.

After fairly robust jobs growth in the first four months of 2011, economists now fear that the recovery may be slowing down. The May jobs growth was only about half the figure forecast by economists and the lowest in nine months.

Manufacturing, which had been adding jobs steadily, fell by 5,000. Local governments shed 28,000 jobs, for a total of 446,000 lost positions since their employment peak in September 2008.

The overall unemployment rate, which rose from 9 percent in April, hit its highest level since December. 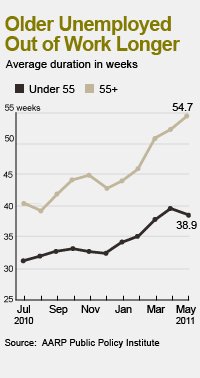 Pressure from all sides

The disappointing numbers reflect multiple drags on confidence and growth in the United States and abroad. The housing market remains depressed, and high gas prices may be biting into consumer spending. Federal stimulus spending is giving way to pressure for major budget cuts. And investors are wary that Europe's debt crisis is flaring up again.

A series of economic reports out this week suggested that bosses are once again becoming reluctant to hire, and some are downsizing.

Stock prices declined after the report was issued Friday morning.

Marisa DiNatale, director at Moody's Analytics, an economic forecasting firm outside Philadelphia, sees hope for improvement. She expects the pace of hiring to pick up steam by the end of the year.

The jobs report "is troubling, with weaker jobs growth but some of this is probably temporary — the disruption in auto manufacturing due to the Japanese earthquake," she says.

"Some of the sectors that are energy intensive and facing higher operation costs [because of the spike in gas prices] may be cutting back, but that could change now that gas prices are moving lower."

Next: Will job growth make progress on the labor market front? >>

Harry Holzer, a former chief economist at the Labor Department and a professor of public policy at Georgetown University, says he worries that job growth will be "too mild" to make progress on the labor market front.

"There are cutbacks in state and local governments, and perhaps in federal spending," Holzer says. "There's some interruption in the auto industry from the tsunami and earthquake in Japan. The housing market is worse than we thought, which weakens the construction and related sectors. You add all that up and … businesses get reluctant to add workers."

For older workers, the challenge to find a job has been consistently more difficult than for younger people.

Nearly 14 million workers were unemployed in May, but 45 percent of them — 6.2 million — had been out of work for six month or more. That's an increase of 361,000 from the previous month, the Bureau of Labor Statistics reported.

Many economists say the "underemployment rate" is a more accurate measure of the nation's job situation than the unemployment rate alone. The polling and research firm Gallup, which defines the rate as including the jobless and people who take on part-time work because they can't find full-time, said it remained at 19 percent in May.

According to the BLS, there are more underemployed workers now than in any other economic downturn in the last 30 years.

Ric Joline, 59, has been searching for a full-time job since September, when his church laid him off as an associate pastor. He gets no jobless benefits because churches are exempt from paying unemployment insurance. To stay afloat, he works part time as a substitute teacher and a swim coach at a local high school in Lancaster, Pa.

"Probably the most frustrating part of my job search has been how long it has taken," Joline says. "My wife has been working six days a week at two jobs to help keep the bills paid, and she is weary."

Each state has its own set of economic circumstances. To see how your state has fared, go to AARP's "pain index."

Next: What's the biggest threat to a sustainable recovery? >>

John Challenger, CEO of the outplacement firm Challenger, Gray & Christmas, says that long-term joblessness is perhaps the biggest threat to a sustainable recovery.

"If we cannot find a way to get these people back on payrolls, the costs to the economy will be significant," he says, "not only in terms of decreased consumer spending, but in increased government spending on social safety net programs, retraining programs and other programs."

In a monthly survey by Challenger's firm, employers said in May that they planned to slash 37,135 jobs, or 2 percent more than what they announced for April. The planned layoffs were largely driven by budget-crunched state and local governments and by the nonprofit sector.

Meanwhile, another survey conducted by the payroll processing firm Automatic Data Processing Inc. showed private-sector employment growth falling. It rose by just 38,000 in May, a fraction of forecasts, after expanding by 177,000 in April.

And in yet another discouraging report on the economy, new claims for unemployment benefits fell slightly last week but were still high: 422,000 people filed in the week that ended May 28. It was the eighth week that new applications for benefits surpassed 400,000, the government reported Thursday. Economists say new jobless claims usually are below 400,000 when the economy is growing and payrolls are expanding.

Carol Ventresca, executive director of the nonprofit Employment for Seniors in Columbus, Ohio, says she and her counselors try to motivate her nearly 1,200 clients to "get out of the house and network."

"It is taking folks a long time to find employment," she says. "People are scrambling and taking anything they can get — part-time when they need full-time, and so on. Volunteering to increase your professional skills is critical. If you have an opportunity to help yourself and give back to the community, that's even better."