Sign up for our monthly Lifestyle newsletter for entertainment news, healthy living tips and more.

With the economy continuing to gain steam, U.S. employers added a robust 244,000 jobs in April, more than economists predicted, but the unemployment rate edged up by 0.2 percent to 9 percent, the government said Friday.

For workers age 55 and older, there was good news too: about 203,000 more of them were employed in April amid a jobless rate that remained unchanged at 6.5 percent.

But for still-jobless older workers, April brought bad news concerning average duration of unemployment: It exceeded the one-year mark. People in the 55-plus group had on average been out of a job for 53.6 weeks as of April, compared with 51.1 weeks the month before. For people under 55, the duration rose to 39.4 weeks last month from 37.8 weeks in March.

The rise in the overall unemployment rate as reported by the Bureau of Labor Statistics was not unexpected. "As confidence grows in the labor market and job growth improves, we expect more job seekers [who stopped looking for work] to enter the labor force," says Michael Bratus, an economist at Moody's Analytics outside Philadelphia. If the newcomers exceed the number of new jobs created, the unemployment rate is pushed up. 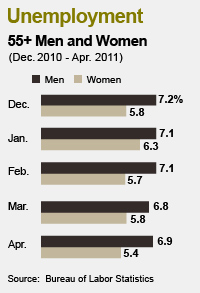 But a bigger reason for the rate’s rise was findings of a survey of American households that is part of the government’s monthly unemployment report. While employers were reporting 244,000 new hires, answers given in households suggested that about 190,000 fewer Americans were working in April than in March. Sometimes the employer and household surveys yield conflicting results; the employer survey is generally taken as the better indication of hiring trends.

On the bright side, the outplacement firm Challenger, Gray & Christmas said that planned company layoffs fell to 36,490 in April, the third-lowest level in 16 months. The April job-cut total was down 5 percent from the same month a year ago. Year-to-date, employers announced 167,239 job cuts, 24 percent fewer than the 219,509 layoffs by the same time last year.

Where the new jobs are

The growth was all in the private sector.

Retailers created the most jobs (57,000) in April, particularly in electronics and appliance stores, garden and building supply stores, and in auto dealerships.

Professional and business services providers added 51,000 jobs last month. Since a low point in September 2009, 745,000 positions were added to that sector, the BLS said.

The leisure and hospital industries added 46,000 to their payrolls and health care companies created 37,000 new jobs. Manufacturers increased employment by 29,000.

Layoffs continued in the public sector, mostly in cash-strapped local and state governments. As many as 24,000 public jobs were lost last month, the BLS said.

Job numbers are generally headed up, but economist Steven Ricchiuto of Mizuho Securities USA in New York says that economic growth "is still so far behind where we should be."

The rate of new jobs added to the economy is not enough to drive the jobless rate lower. He criticized corporations for chasing record earnings by relying on fewer workers for increased output.

Next: Some workers worry they may never find a job. >>

"We're an economy still facing significant headwinds," Ricchiuto says, citing higher energy prices, prolonged weakness in the housing market and continued layoffs in local and state governments. "And against all that, corporations want to record double-digit earnings. They're not hiring workers."

For Wayne Wagner, 63, of Gainesville, Fla., it's four years and counting since he lost his job as a construction superintendent. Unable to find full-time work, he hops on two buses, then rides his bicycle for about a mile to get to his part-time job at a county household hazardous waste recycling center.

"I had all the confidence in the world for the first year or two that I'd find work," says Wagner, who took early Social Security benefits to help pay his bills. "I'm a good worker. It's been rough."

The number of discouraged workers age 55 and older — people who became so dissatisfied with their job prospects that they recently stopped looking — remained about the same at 270,000 in April, according to Sara Rix, a strategic policy adviser at AARP. She worried that many older workers may never find a job.

"At the rate we are producing jobs, many older workers may give up and drop out of the labor force,” she says. “If they reach retirement age and haven’t found a job, they may say that they might as well retire.  If you can’t find a job, at some point discouragement sets in."

More people had taken part-time jobs in April because they couldn't find full-time work. The government said the number of part-timers increased to 8.6 million from 8.4 million in March.

A whopping 8.7 million jobs were lost between December 2007, the start of the recession, and February 2010, the lowest point for employment, says Heidi Shierholz, a labor market economist with the nonprofit Economic Policy Institute in Washington. But only 1.8 million jobs were created between February 2010 and April 2011, she said.

Because the job losses were so large, employers would have to hire 400,000 additional workers each month to drop the unemployment rate to prerecession levels in three years, Shierholz says.

"We have 13.7 million unemployed workers, and millions more have given up looking for work," she says. "We are in a rocky recovery."

Other widely watched indicators of the employment situation give evidence of continuing trouble.

For instance, the number of people who filed for first-time jobless benefits rose by 43,000 to a seasonally adjusted 474,000 in the week that ended April 30, the Labor Department reported. It was the highest level since last August. Economists had expected initial claims to drop to 400,000 in the latest report.

According to a separate report (PDF) issued Wednesday by ADP, a company that handles payrolls, private companies added 179,000 jobs in April, the lowest increase since November.

"While employment accelerated sharply around the turn of the year, the monthly gains have been holding fairly steady around 200,000 since then," Joel Prakken, chairman of Macroeconomic Advisers, whose firm helps ADP compile the jobs report, said in a statement. "Employment growth at this pace is consistent with only modest declines in the unemployment rate."