Looking to volunteer? Help older taxpayers get the credits and refunds they deserve. Learn more.

U.S. employers added 103,000 jobs to their payrolls in December, helping push down the unemployment rate to 9.4 percent and feeding cautious hope for a better outlook for 2011, the government reported Friday. 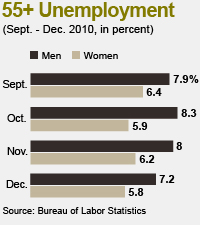 The outlook for older workers also turned slightly rosier in December. For 55-plus job seekers, the rate dropped to 6.9 percent from November’s rate of 7.2 percent.

Though the number of jobs added to the economy was lower than what analysts predicted, the latest labor report indicates a stronger recovery, says Gus Faucher, director of macroeconomics at Moody's Analytics outside Philadelphia. "Everything is pointing in the right direction. The economy is adding jobs, businesses are hiring and businesses will boost their hiring through 2011," Faucher says.

The jobless rate declined by 0.4 percent in December from 9.8 percent in November. It was the lowest rate in a year and a half, according to the Bureau of Labor Statistics (BLS). The December decline was due to new jobs being added, but also to a shrinking of the labor force as people gave up looking for work and weren't counted as unemployed.

For the entire year, the jobless rate was 9.6 percent. During the recession, the unemployment rate peaked at 10.1 percent in October 2009.

The duration of unemployment for those 55 and older fell to 43 weeks as of December from 45 weeks the previous month. For younger workers, the duration declined to 32 weeks last month from 33 weeks.

The number of people who were out of work for six months or more grew slightly, to 6.4 million, accounting for 44 percent of the jobless in December. More than half, 56 percent, of the long-term jobless were 55 and older, down from 58 percent in November.

"The news is encouraging with the decline in the unemployment rates and the increase in older persons with jobs," says Sara Rix, strategic policy adviser for AARP.

"The unemployment rate remains way above what it was at the beginning of the recession, and it will take a lot to get it down to where it was even three years ago, but we're hoping that this [expansion] continues in the coming months," Rix said.

Health care and temporary help services continued to add the most jobs in December. The food services industry also netted job gains, according to the BLS. Federal, state and local governments, however, continued to eliminate jobs.

Though unemployment remains high, U.S. businesses are widely expected to hire as many as 2.5 million workers in 2011 to meet increasing domestic and global demand for goods and services. Adding to payrolls at this level would accelerate a trend that began in 2010, when about 1 million jobs were created.

Even with more robust hiring, however, analysts say it may not be enough to substantially lower the unemployment rate, at least not in the short term. That's largely because discouraged workers who stopped looking for jobs, and consequently weren't counted among the unemployed, are expected to return to the labor pool as the market heats up.

Moreover, consumer confidence is growing, chipping away at employers' reluctance to hire permanent staff. By the end of the year, Zandi says, the jobless rate could sink to 9 percent.

Bernard Baumohl, chief global economist at the Economic Outlook Group of Princeton, N.J., offers a similar upbeat forecast of a recovery that began in July and is gaining momentum. "We're seeing a pickup in permanent workers, and I expect temporary hiring will be fading," he says.

While the forecast is rosier than in the previous three years, economist Heidi Shierholz of the Economic Policy Institute in Washington says a total of 11 million jobs must be created to return to prerecession unemployment rates.

"We're moving in the right direction, but we won't get out of the hole anytime soon," Jay Feldman, an economist at Credit Suisse in New York, told the Bloomberg news service. "For the Fed, it means steady as she goes."

Overall, more than 8.4 million jobs were lost from December 2007 through December 2009, according to the BLS. Since then, companies have relied on remaining employees to work longer and harder to pick up the slack. Some employers hired temporary or part-time workers rather than permanent staff.

The labor market varies by region. For a snapshot of the economic situation in your area, check out AARP's "pain index."

In previous recessions, Shierholz says, consumer spending led the nation to stronger recoveries. But not this time around.

"Consumers are a lot poorer than they used to be," she says. "They lost a ton of wealth in the housing sector. And families are facing huge instability in the job market with job loss and wage stagnation," leaving them with less income to spend.

Though companies are expected to be more eager to hire in 2011, finding work may remain difficult. Job seekers will likely face competition from long-term unemployed workers reentering the market as well as from employed workers who sat tight in their jobs during the recession but are now ready to seek "greener pastures," workforce consultant John A. Challenger says.

In Youngstown, Ohio, 60-year-old Vernon Penny Jr. is already benefiting from a brighter labor market. He landed a job in December as a private security guard after being unemployed for nearly a year. It's not the job of his dreams — he was a television technician for 10 years and worked in loss prevention for four years — but he says he's fortunate to be back at work again.

"I had about five interviews in 10 months," says Penny, who is also taking information technology courses at a vocational school. "This opportunity presented itself, and I'm able to go to school at night. I hope to get a help-desk job."

But unlike Penny, millions remain out of work. If you're among them, here are some job-seeking tips to consider:

If you're over 55 and meet certain income requirements, AARP's free Senior Community Service Employment Program can help. AARP staff will assess your job skills and interests, connect you with training, help you update your résumé and provide you with job leads.