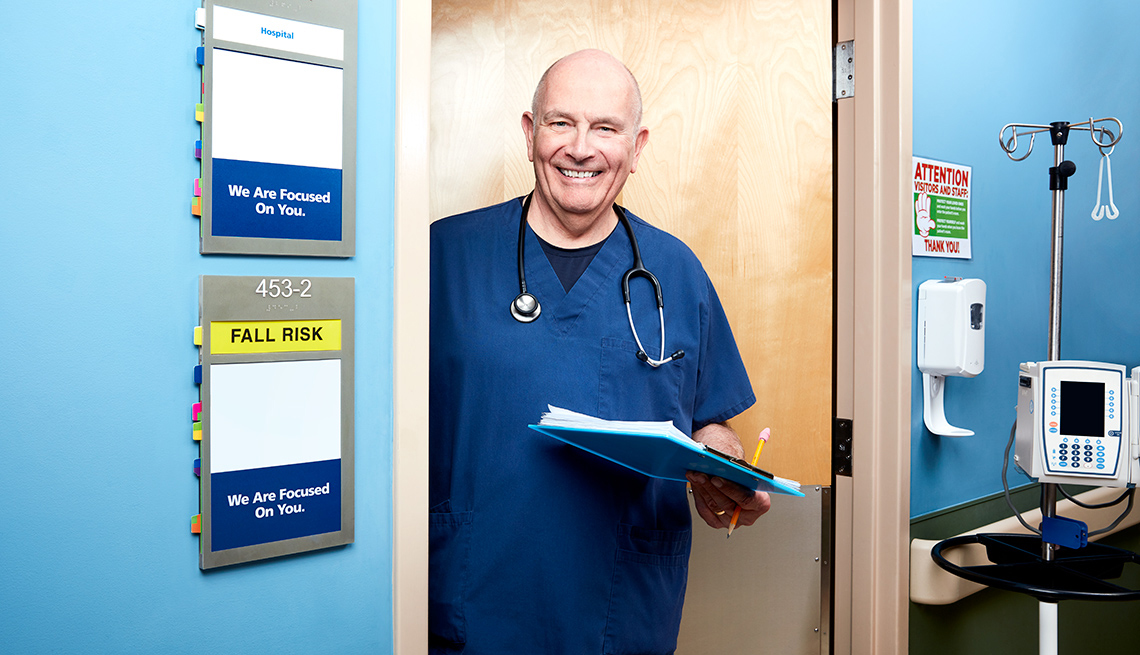 AARP member Gary L. Laabs retired as a human resources executive and began his third career as a registered nurse at age 65.

May is Military Appreciation Month. AARP honors the service and sacrifice of members of the Army, Navy, Air Force, Coast Guard, Marines and National Guard as well as the contribution of their spouses. And since we’re also observing National Nurses Week, May 6-12 each year, ending with Florence Nightingale's birthday, we’re spotlighting AARP member Gary L. Laabs, 74. After retiring as a human resources executive, Laabs, an Army veteran, began his third career as a registered nurse — at age 65. Through this exciting #DisruptAging journey, he’s also found ways to make his own community healthier and contribute to health care overseas as a volunteer. We asked the Hanover, Pa., resident how he found new purpose.

Q: You were nearing retirement as a VP of human resources at a snack food company. What made a new career in nursing seem like a real possibility?

A: I’d been on several volunteer medical missions to the Dominican Republic as a general helper, guiding people from station to station at medical clinics, teaching Bible classes to children. I always wanted to do more. When I realized that I could become an RN in two years, I decided to go for it! I was grooming my successor at Utz Quality Foods. Knowing my management career was coming to an end, I took the remedial courses in science I needed to qualify for nursing clinicals while still working. I did most as night courses at the Gettysburg Campus of HACC, Central Pennsylvania's Community College, and I supplemented those with a couple of online HACC courses. I took the courses HACC identified as needed to qualify for clinicals plus some, such as pharmacology, to increase my medical knowledge.

A: This is the first career I’ve chosen deliberately. I was drafted into the service. When I retired from the Army, I had four kids, with the oldest starting eighth grade. Utz was a great opportunity, which I grabbed. Often, we have to take what is dealt and make the best of it. When I chose nursing, I was the dealer. Treating patients overseas is a special calling. In the Dominican Republic, embedded with an encampment of Haitian sugarcane workers, we had a mom who had given birth just hours before bringing in her very sick infant. We administered antibiotics and made sure the child was seen at the hospital. Seeing that baby as an active and healthy toddler when I returned for another project was really satisfying.

Q: What was your path to retraining?

A: I attended community college part time. I also started working nights and weekends as a contingent clerk in the emergency department at our local hospital. Once accepted into nursing school, I retired from my day job at Utz. I became a registered nurse in December 2008, when I received my associate’s degree. I immediately began full-time work at UPMC [University of Pittsburgh Medical Center] Pinnacle Hanover. I’m continuing studies toward an MS in nursing. In February, I earned my BSN [bachelor of science in nursing] from Western Governors University. Working towards my master’s keeps my brain working with fewer cobwebs. The MSN [master of science in nursing] will qualify me to teach nursing and to be the medical director for medical mission projects overseas.

Q: How do you juggle everything?

A: This third career and my volunteer work would not be possible without the support and encouragement from my wife, my family and my church family. Eileen and I celebrated our 48th anniversary last November. St. Mark Evangelical Lutheran Church here in Hanover is very supportive of my involvement in overseas medical missions. Congregants donate money to offset fees and expenses, as well as medical supplies for my mission trips.

Q: Have you volunteered in other countries besides the Dominican Republic?

A: I joined two general surgeons, a thoracic surgeon, an ophthalmologist, a family practice physician, an anesthesiologist, other nurses and some general helpers on a surgical mission to the Galapagos Islands. We had hundreds of patients, many of whom had traveled by boat for hours to get there. We needed police to control the crowd the first day. I worked in post-anesthesia recovery, monitoring patients as they awoke after surgery, and treating them for pain or nausea.

Q: The volunteer work you do stateside is all about keeping your neighbors healthier. What does that involve?

A: I became an RN as the country’s economic downturn was hitting. I was asked, because I’m involved with the Hanover Area Council of Churches, to work on an effort to help individuals and families who lost their health insurance. The initial request for me to get involved came from my pastor, Rev. Kirk Griffin, as a representative of the Hanover Conference of Lutheran Pastors of the Evangelical Lutheran Church in America. Pastor Griffin and I then met with Carol Jo Hinkle, executive director of the Hanover Area Council of Churches. When we asked Carol Jo what was needed in the Hanover area, she replied, "A free medical clinic." From that point forward we were off and running.

This initiative grew into the Greater Hanover Healthcare Committee. I chaired this task force until I started pursuing the MSN in 2016. We created a health care guide in English and Spanish that connects families with social service and nonprofit agencies. We organize flu shot clinics each year. But I’m most proud of the free medical clinic the committee makes available for the uninsured and underinsured two mornings and two evenings each month. In addition, we started the Healthy Hanover Community Gardens Project, which provided over 1,000 pounds of fresh vegetables to our food bank and soup kitchen in 2016, and added more gardens in 2017.

Q: What advice do you have for others thinking about switching careers after 50?