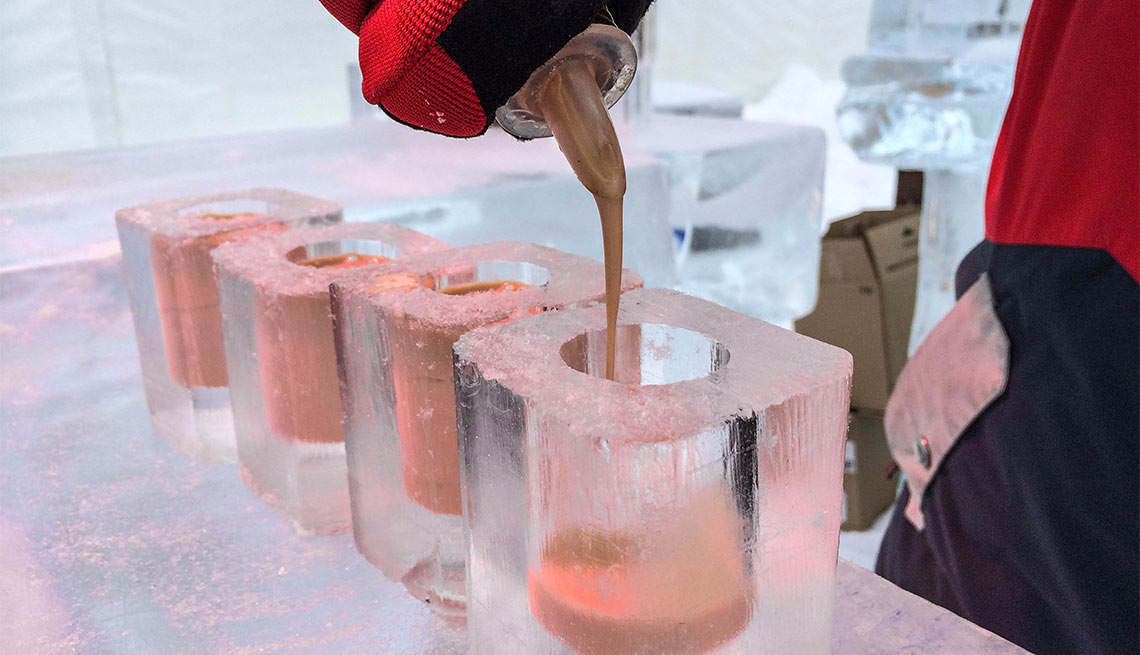 Some bars in Quebec serve drinks in ice tumblers.

En español | Somewhere between sipping creamy Amarula liqueur from a carved-ice tumbler and rocketing down the Terrasse Dufferin boardwalk in a toboggan, I decided it hadn't been foolish after all to visit the Great White North in February.

So why return in the dead of winter? Everyone I met insisted that Quebec is at its best during the two-week Winter Carnival that starts in late January, when master sculptors carve megalithic snow monuments, pop-up ice bars hand out shots and every incline beACcomes a sledding hill. The main carnival fairgrounds lie just outside the city walls on the Plains of Abraham — the same spot where in 1759 British troops launched a surprise attack, seizing Québec City and spelling the end of New France

During the festivities, the site is alive with ice bumper cars and outdoor hot tubs, curling sheets, sleigh races and epic snowball fights. And these aren't just kids playing in the snow; young and old alike join in the fun.

Nibbling on a queue de castor — a massive "beaver-tail" slab of fried dough glittering with cinnamon sugar — I squeezed through the crowd to watch a human foosball game. The players, strapped to oversize rods, kicked the soccer ball while their giggling friends pushed and pulled them wildly around the snowy arena.

On my final evening, after watching dancers and Mardi Gras–quality floats along the Grande Allée, I clambered up onto the snowy city ramparts overlooking a three-story ice castle glowing with lights. A band in the park below launched into what must be the Quebecois equivalent of "Sweet Caroline," the audience passionately singing along in French. I did my best to belt it out with my neighbors, our breath frosting the February air.

Quebec is a bilingual city, but it's "French first." Quebecois are encouraging when visitors try to use even rusty high school French.

Reid Bramblett, a Philadelphia-based travel writer and expert, is the founder of ReidsGuides.com.