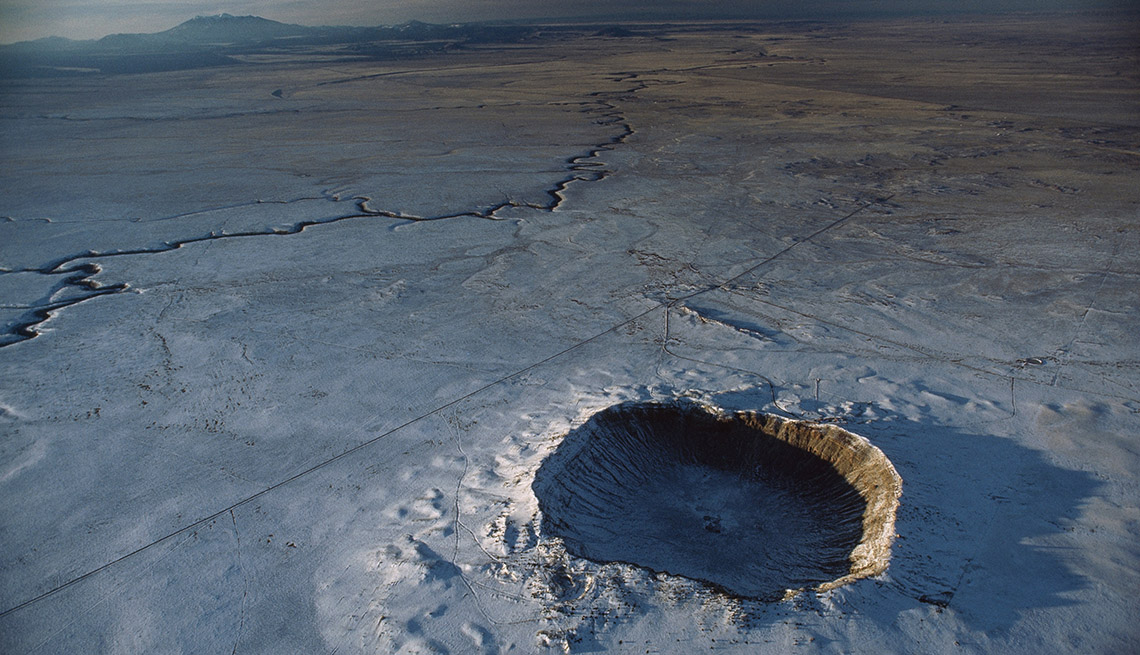 The Meteor Crater is more than 550 feet deep.

As you sit in that Winnebago jam on the way to the Grand Canyon, you may find yourself muttering, "I wish there were a different big hole we could stand at the edge of!" Here are a few even more impressive than Arizona's Big Ditch.

There's something terrifyingly primal about this 26-foot-wide puncture wound in Yellowstone National Park's Upper Geyser Basin. The gentle outer slope, colored brilliant yellow and orange by bacteria in hot water, plunges into a funnel-like darkness at its center. While you're in the area, take a walk along the paved 1.4-mile Morning Glory Pool trail, which passes some of the park's biggest geysers. Eruption times are posted at Old Faithful Lodge.

Tucked away along the Snake River in the northwest wilderness seven hours east of Portland, the deepest gorge in the U.S. is more than a half-mile deeper than the Grand Canyon. Plus, Hells Canyon is just half as wide, so the plunge is even more dramatic. Don't miss the vista of distant snowcapped mountains and steep valley walls at Hells Canyon Lookout, the overlook closest to Interstate 84 at Baker City, Oregon, 82 miles away.

As you drive along the six-mile road south of I-40, the horizon darkens with a rugged rise. Step to that rim and your senses are overwhelmed with a vast, devastated landscape. Just 50,000 years ago a meteorite about half as long as a football field slammed into this area, killing untold woolly mammoths and excavating a mile-wide crater that looks like it was somehow transplanted from the moon. If you visit Meteor Crater, look for the cutout figure at the crater's floor, representing Apollo astronauts who practiced their moonwalks here.

Big-city drivers may disagree, but the deepest potholes in the world pepper a 20-acre spot in Interstate State Park, which is an hour north of Minneapolis. Here, an ancient river running from Glacial Lake Duluth carved hundreds of bores into solid basalt.

Thanks to forest-lined Pine Creek Gorge's informal name, you can brag that you visited the Grand Canyon. (Just don't say it was the Pennsylvania Grand Canyon, or that you ventured just two hours north of Harrisburg). If you go, bring your bike. A striking 65-mile bike trail was an old railroad route. Careful — the bald eagles might distract you.

If you happen to be traveling I-81, hop off at Route 6 and drive the eight miles to admire a glacially dug pothole that's been attracting visitors since it was discovered in 1884. Nearly 40 feet deep, it cuts through sandstone, shale and coal. Resist the temptation to throw something in, though: Over the years Archbald Pothole State Park workers have removed a parking meter, a park bench and a "wet floor" cone.

About 110 years ago the Kennecott Copper Corp. started digging for copper about 28 miles southwest of Salt Lake City, and that first hole has grown to a tiered bowl measuring 2-3/4 miles wide and three-quarters of a mile deep. Since 1992 more than 3 million visitors have toured the visitors center at this National Historic Landmark — but a landslide forced Bingham Canyon Copper Mine's closure last year. The mine road has been rebuilt and the company plans to reopen the visitors center in spring of 2014.

Basically a spectacular 72-foot-wide bathtub drain, the overflow shaft in Lake Berryessa is the largest of its kind in the world. It looks like a giant hole in the lake when the water pours in. When the water level is low (as it is most of the time), it resembles a giant trumpet horn. A continent away from Northern California, a similar drain hole punctures the lake behind Harriman Dam near Wilmington, Vt.

More than 63 million tons of iron ore were scooped out of this massive open pit mine, which closed in 1978 and is now a tourist attraction. The Hill Annex Mine pit is hundreds of feet deep, but when the mine closed they stopped the water pumps, so now it's flooded. Still, a pontoon boat ride reveals the mine's steep sides. You can also go fossil hunting — and keep what you find.