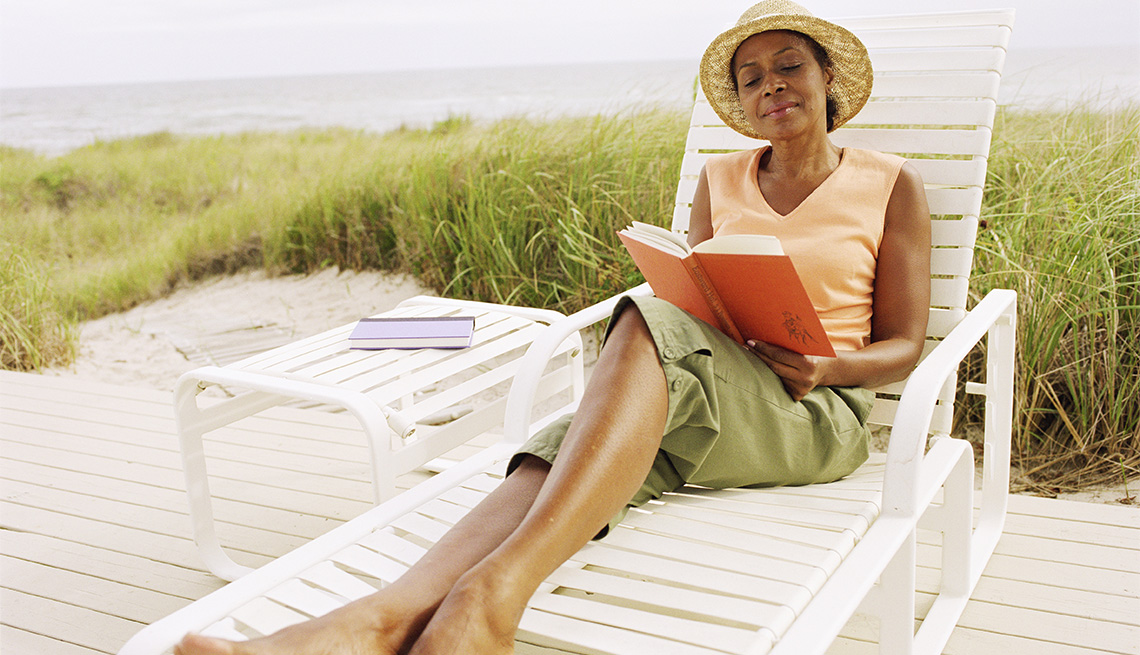 With so many of us sheltering in place, our travels have come to a screeching halt. But from the confines of your living room, you can still lose yourself in wanderlust, through books that transport you to other destinations and open your eyes to other cultures. Here, eight especially savvy travelers — movers and shakers in the global travel industry — recommend their favorite reads that can take you on truly memorable armchair journeys.

Laura Davidson, president of LDPR, a New York–based public relations agency specializing in travel, and recently named one of the 50 Most Important Women in Travel by Wonderlust magazine

The pick: In a Sunburned Country by Bill Bryson, 2000, nonfiction

In a nutshell: Bryson delivers a kind of annotated guidebook with this off-the-beaten-tourist-path trek through Australia. It's chock-full of observations, facts, stories, hilarious reflections and interactions with friendly Aussies happy to oblige him.

Why it's a fave: “This book takes a humorous look at the land Down Under, a place that doubles as a continent and a country. Fact-filled, full of dangerous creatures and colossal myth, the book promises to keep readers distracted from the woes of staying in.”

Peter Greenberg, travel editor of CBS News, host of the PBS programs The Travel Detective and The Royal Tour, and host of the CBS nationally syndicated weekly radio show Eye on Travel

The pick: The Innocents Abroad by Mark Twain, 1869, nonfiction

In a nutshell: Spiced with Twain's keen eye, quick wit and unflagging humor, this fun read details Twain's adventures on a peripatetic journey around the world. He ventures from Paris to Cairo, from the Azores to Odessa.

Why it's a fave: “This is a collection of Twain's letters to newspapers about his truly pioneering voyage — by steamship — to Europe and the Middle East. This is Twain at his humorous best, and great travel writing. His often-satirical observations about his world travels are cutting, deep and often witty.”

The pick: All the Light We Cannot See by Anthony Doerr, 2014, fiction

In a nutshell: This New York Times best seller details how a blind French girl and a German boy intersect amid the terrors of World War II.

Why it's a fave: “This book completely transported me to wartime Europe. It is one of the most beautifully written books I have ever read. Doerr takes great care to paint the world using words, perhaps because the protagonist, Marie-Laure, is a young girl who is blind and lacks the sense of sight herself. His words not only help you visualize the story in great detail, you can almost smell, touch and taste the story's settings in France and Germany.”

The pick: Las Vegas: Then and Now by Su Kim Chung, 2002, nonfiction

In a nutshell: This coffee-table-worthy book portrays the city's history, from a remote outpost to a modern-day entertainment mecca, with the author juxtaposing historical photos with contemporary shots.

Why it's a fave: “It takes you on a photo journey of Sin City, from the early 1900s and the historic downtown area to the booming era of the 1960s when the town became America's playground in the west. AARP readers will enjoy seeing hotels they visited a few decades ago and those same streets with new hotels on every corner. From showgirls to slot machines, this book takes you back in time to the days when Elvis and the Rat Pack ruled the town's marquee lights, then transports you to modern-day Las Vegas and the hotels and shops that rule the strip today.”

The pick: The Splendid and the Vile: A Saga of Churchill, Family, and Defiance During the Blitz by Erik Larson, 2020, nonfiction

In a nutshell: With captivating prose, Larson recounts Winston Churchill's first year as the U.K. prime minister, in 1940, focusing on his leadership, current events and his domestic life.

Why it's a fave: “This book taught me so much about what defines the British. Even if you think you know a lot about Winston Churchill, you gain new insights in how he led Britain and held the country together during the Blitz.”

The pick: Where the Crawdads Sing by Delia Owens, 2018, fiction

In a nutshell: Set in coastal North Carolina in 1969, this poignant mystery that continues to top best-selling lists features Kya, a girl who lives in a marsh and becomes a murder suspect. It is a sweet tale of redemption, coming of age and kindness among strangers — with nature looming large.

Why it's a fave: “The powerful female character of Kya and the evocative scenery of my home state captured me straight through to the end. Losing yourself in this book is like a virtual vacation to coastal North Carolina — through Delia Owens’ words, you can smell the marsh air and feel the last rays of sunlight on your face.”

The pick: The Alchemist by Paulo Coelho, 1988, fiction

In a nutshell: A modern classic full of metaphor and enchantment, this story follows Santiago, an Andalusian shepherd boy, on his hero's journey in search of worldly treasure and inner knowledge.

Why it's a fave: “Santiago dreams about traveling the world and its faraway places, with an unwavering dedication to reach his goals. He follows his heart through the markets of Tangiers, the vast desert sands of the Sahara and, ultimately, to the oasis of Al-Fayoum, where he meets a 200-year-old alchemist. The story is a simple but powerful one that our life is both a journey and a treasure hunt, and Coelho subtly leads us to believe that the universe conspires to make our dreams happen when we want them bad enough.”

In a nutshell: It's the Ripley's Believe It or Not of quirky things to see and do around the world, from bizarre museums such as Zagreb's Museum of Broken Relationships to sights like New Zealand's glowworm caves.

Why it's a fave: “One's imagination is both delighted, enticed and enthralled while reading it. One can pick it up for even just a few minutes, dive into a certain destination and what curiosities to consider there, and then put it aside until the next time wanderlust gets to you. Some activities are quite peculiar, such as a baby-jumping festival in Spain, where men dress up as devils and jump over wriggling babies. I have found many new places and activities I want to do.”

How to buy: These books are available at Amazon.com, Bookshop.org (where your purchase supports independent bookstores), Barnes & Noble (bn.com) and wherever else books are sold.