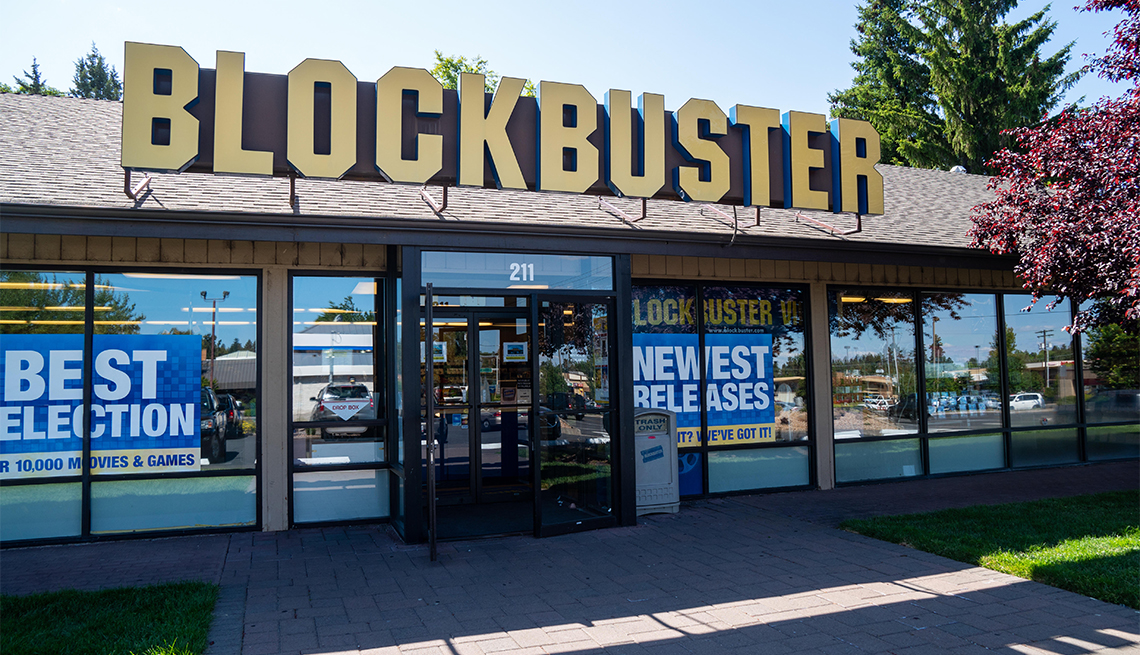 The exterior of the last remaining Blockbuster store in Bend, Oregon.

Remember when hair was bigger, shoulders were padded, phones were for talking and movie nights at home began with a drive to Blockbuster? Those blue-and-gold havens for movie lovers have gone the way of cassettes and videotapes ("be kind, rewind!"), but for the one remaining Blockbuster video-rental store in Bend, Oregon — which is temporarily opening itself up for sleepovers.

This week it created a flurry of headlines after posting a listing on Airbnb that offers three groups of up to four movie lovers the chance to stay at the store overnight for, the enthusiastic listing notes, “a socially-distanced movie night, just like those of decades past!”

Reservations are only open to residents of Deschutes County on August 17 for August 18, 19 or 20, at just $4 a night. The nostalgia trip comes complete with a pull-out couch, a jazzy rug in front of a large-screen TV, an air mattress, bean bags, lots of pillows, a period-perfect ‘80s-style comforter (with those brightly colored squiggles and shapes) and access to all the NERDS, Doritos and popcorn you can snarf while bingeing on Titanic, Jurassic Park and maybe a little Dirty Dancing.

It won't be a complete throwback: The package also includes “a pack of face coverings, disinfectant wipes and endless hand sanitizer!” And you'll need to wear a mask when you meet store manager Sandi Harding, who'll hand you the keys and leave you to it.

While the offer is only available to locals, the store is still welcoming people from around the country to “take advantage of our Callgorithm,” which means calling (541-385-9111) to receive movie recommendations from “a real human.” How quaint, right?

The listing was posted by Harding, whose description notes that she's worked at the store since 2004, when Blockbuster had thousands of locations.

The chain was founded by David Cook and opened its first location in 1985 in Dallas, Texas, with some 8,000 titles. It quickly became the Starbucks of video stores, dwarfing the little mom-and-pop shops with its more than 9,000 stores by 1994, when it was snapped up by media giant Viacom.

Then came DVDs and, in 1997, Netflix, offering home delivery of choice flicks with no late fees.

Blockbuster filed for bankruptcy in 2010, but a few independent stores still clung to life. The second-to-last one in the United States, in Alaska, closed in 2018, and a holdout in Australia closed last year. That left the Bend location as the final stalwart, still charging only $3.99 (plus tax) for a movie rental. Its bottom line is boosted, however, with sales of “Last Blockbuster on the Planet” magnets and pint glasses, and it reportedly welcomes lots of selfie-snapping tourists making pilgrimages to this improbable mecca for nostalgia seekers.

Taylor Morden, a Bend-area documentarian who's just wrapped up a film about the store called The Last Blockbuster, says he thinks the warm-fuzzy feelings people have for Blockbuster “has to do with the physical act of going to a place, interacting with people and holding a physical object. It made us have a much stronger connection with the movies we watched back then.”

The documentary, which Morden, 38, created with his partner Zeke Kamm, premiered at a pop-up drive-in screening in Bend on July 25. Morden says they plan for a wider release in December — and hope to get it on the shelf at Blockbuster soon.