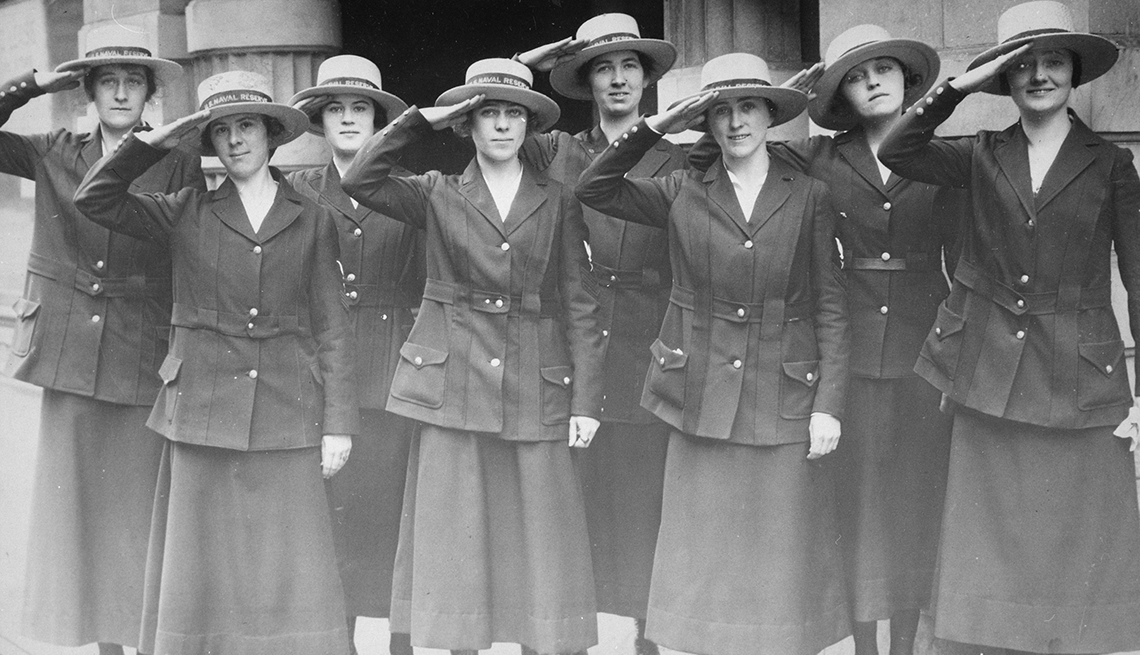 During World War I, yeomen served in roles such as stenographers, clerks, radio operators and messengers. Above is a photo of San Francisco yeomen attached to the Naval Reserve in 1918.

En español | A new exhibit at the National Archives commemorates the 100th anniversary of the 19th Amendment — and, most dramatically, the decades of thwarted efforts and remarkable resolve that led to its final passage in 1920.

"It was a more than 70-year struggle,” said exhibit curator Corinne Porter at a press briefing on Tuesday introducing “Rightfully Hers: American Women and the Vote,” sponsored in part by AARP. She noted that the rumblings for broader voting rights began to grow as early as the first Women's Rights Convention in 1850.

The exhibit, open May 10 through Jan. 3, 2021, displays dozens of key documents from the Archives’ vast trove, including the original 19th Amendment, displayed under glass at designated times (check the Archives site for dates).

Visitors also can see letters and petitions from suffragette leaders such as Lucretia Mott, Susan B. Anthony and Elizabeth Cady Stanton, as well as the “Motor Voter” T-shirt calling for young people to “Rock the Vote!” given to President Clinton when the National Voter Registration Act passed in 1993, allowing people to register at their departments of motor vehicles.

It's an artifact close to Porter's heart, she said, because she first registered to vote at her local DMV at age 18.

These women salute proudly during a suffrage march in Washington, D.C., on March 3, 1913, the day before Woodrow Wilson’s first presidential inauguration..

While the amendment's official centennial isn't until Aug. 18 of next year, “Rightfully Hers” opens in time for the 100th anniversary of the amendment's passage by Congress on June 4, 1919.

Washington will soon be rich with other 19th Amendment-themed exhibits. The National Portrait Gallery has a show through Jan. 5, 2020, called “Votes for Women: A Portrait of Persistence,” with six galleries displaying 120 historic artworks, posters, video clips and cartoons related to women's suffrage.

And on June 4 the Library of Congress opens its exhibition, “Shall Not Be Denied: Women Fight for the Vote,” also sponsored in part by AARP. Displays include a draft of Stanton's The Woman's Bible, her best-selling challenge to the premise of women's subservience; and documentation of the abuse suffered by women who were jailed for picketing for voting rights in front of the White House. It's on view through September 2020.

All three exhibitions are free to the public.