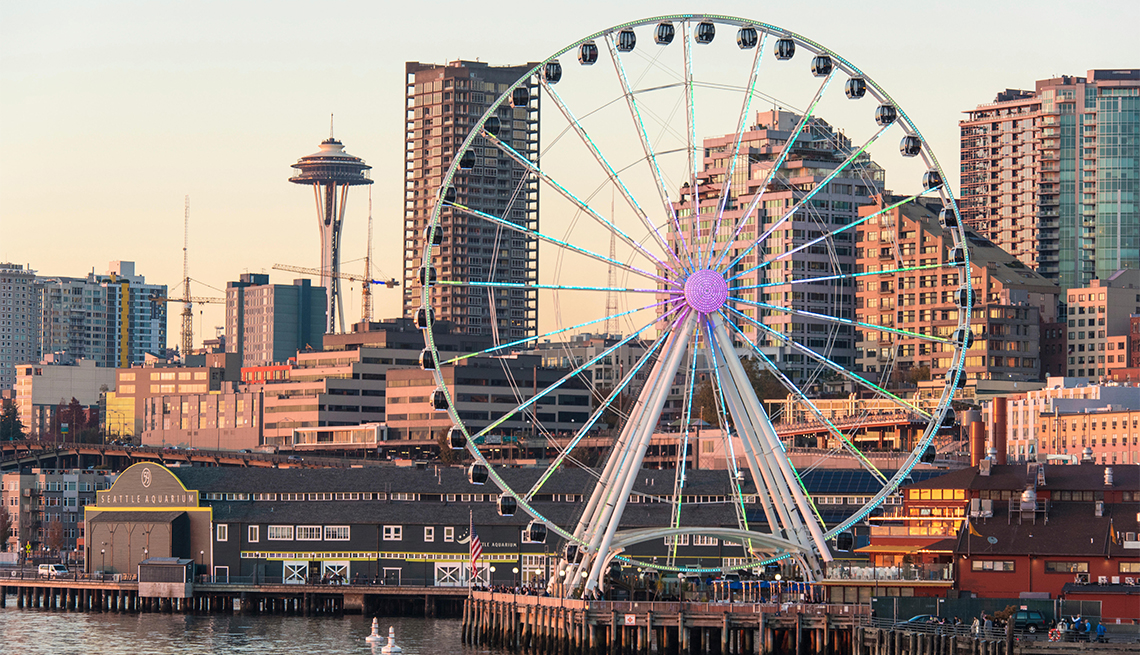 En español | Framed by distant, snowy peaks, a sparkling lake and a vast estuary teeming with wildlife, Seattle — the Emerald City — ranks among America's most eye-catching urban centers. It's also a premier hub for Alaska and Pacific Northwest cruises, giving the million-plus passengers who embark or disembark here between April and October a great opportunity to explore this dynamic city of 725,000.

You might not have time for all of the destinations mentioned below if you're only in town for a day or two — visitors spend hours in the Pike Place Market area alone — but you can pick and choose among them to create your own stellar itinerary. Most of these spots are clustered near or on the waterfront, so you'll be able to hit many of them on foot.

The Space Needle was built for the futuristic 1962 World's Fair. Rising 605 feet above Seattle Center (the fair's former site, located only two minutes from downtown via the still-functioning ‘60s monorail), the soaring structure suggests a flying saucer atop an aerodynamic pedestal. A 43-second elevator ride leads to the observation deck, with its spectacular city, mountain and water views (when the weather is clear), and the world's only rotating glass floor. Admission is pricey, but the Seattle CityPass confers discounts here and at a handful of other top attractions, two of them also at Seattle Center: Chihuly Glass and Garden, a series of galleries filled with the phantasmagoric creations of Washington state glass artist Dale Chihuly, and the Museum of Pop Culture, a genre-defying assemblage of Jimi Hendrix guitars, Star Trek costumes and more, all housed in a billowing building in Mylar colors by architect Frank Gehry. (The CityPass for the Space Needle and two museums is $59 for adults, $49 for ages 65 and up.)

You'll be a short walk from the Seattle Art Museum (SAM)'s free Olympic Sculpture Park on the waterfront, which makes a fine spot to enjoy world-class contemporary art along with views of Puget Sound and the Olympic Mountains. It opens a half hour before sunrise and closes a half hour after sunset.

A little more than a mile south of the park is SAM's main campus ($19.99 for adults; $17.99 for visitors 65 and older), which houses a global collection: from ancient Maya ceramics, and paintings by Matisse and Monet, to contemporary African photographs and an impressive display of intricate baskets, dramatic masks and other Native American artifacts from the Pacific Northwest. Note that it's closed Mondays and Tuesdays. 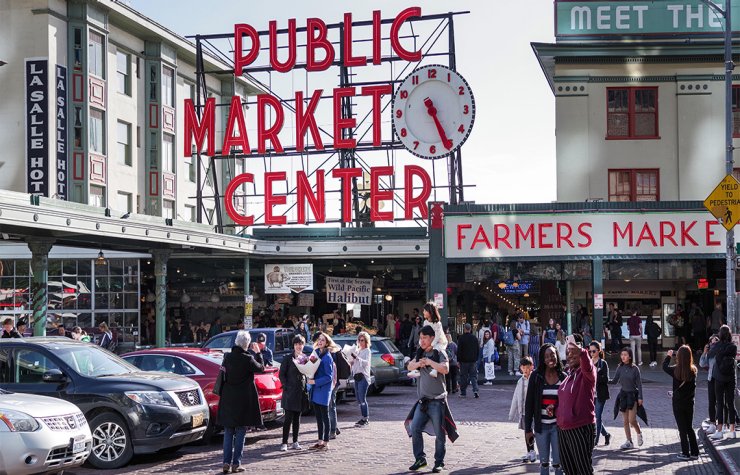 The museum is just a block from Historic Pike Place Market, one of Seattle's most popular draws. Established in 1907 on a hill above the downtown waterfront, the indoor, multilevel collection of 500 shops, vendors, restaurants and bars bursts with fresh produce and flowers, pristine seafood, Northwest crafts, and the throngs who come to shop and gawk. The salmon-slinging fish mongers might be the market's most famous photo op, edging out the early Starbucks location whose windows sport the bare-breasted mermaid logo originally used in the 1970s by Seattle's omnipresent coffee purveyor. Eating options range from the casual — rich, gooey mac and cheese from Beecher's Handmade Cheese, for example — to elevated Pacific Northwest fare like grilled Skagit River king salmon and blackberry bread pudding at Matt's at the Market.

The market is also near the downtown waterfront, which shines these days thanks to the nearly complete replacement of a hulking elevated highway by a handsome boulevard. Must-sees here include the Seattle Aquarium's menagerie of playful sea otters, undulating octopuses and 10,000 other critters from Puget Sound and beyond, and the vertiginous vistas from the Seattle Great Wheel, a 175-foot-high Ferris wheel whose more than 500,000 LED lights make for trippy, free nighttime light shows. If you're a fan of freshly shucked oysters, take a seat at the 21-foot-long bar at Elliott's Oyster House, where dozens of mostly local varieties are typically on offer.

Also close by (about a half mile from the Great Wheel), and anchored by a 60-foot Tlingit totem pole and a 1909 iron pergola, is Pioneer Square, Seattle's first neighborhood. Today its historic, exposed-brick buildings house trendy galleries and eateries, like the hybrid florist-bakery-cafe London Plane. For a fascinating, warts-and-all look at rollicking early Seattle, Bill Speidel's Underground Tour will guide you along subterranean storefronts and sidewalks buried when the city rebuilt after an 1889 fire.

To check out a different area of the city, head just outside the downtown core to Capitol Hill. It's topped by verdant Volunteer Park, where the serene Buddhas and other artifacts at the Seattle Asian Art Museum should again be on view in early 2020 after a multiyear renovation of its 1933 Art Deco building. In front of the museum, there's a great view of the Space Needle through the center of Isamu Noguchi's black, donut-shaped sculpture, a work said to have inspired Seattle grunge band Soundgarden's 1994 hit “Black Hole Sun.” About a half-mile from the park, the restaurant Monsoon is a top spot for innovative Vietnamese cuisine.

And if you are an aviation fan, you'll want to make time for the Museum of Flight ($25 for adults, $21 for those 65 and older; free from 5 to 9 p.m. on the first Thursday of the month), which is just beyond Seattle's southern limit and about a 20-minute drive from the Space Needle. It's one of the largest air and space collections in the country, with displays that include the first jet Air Force One, the only Concorde on the West Coast, and a NASA Space Shuttle Full Fuselage Trainer. As a reminder of just how deep tech roots run here, the museum also exhibits the two-story wooden barn that was the 1916 birthplace of the city's first major technological enterprise, Boeing Airplane Company, long before Johnny-come-latelies like Amazon and Microsoft helped define modern Seattle.