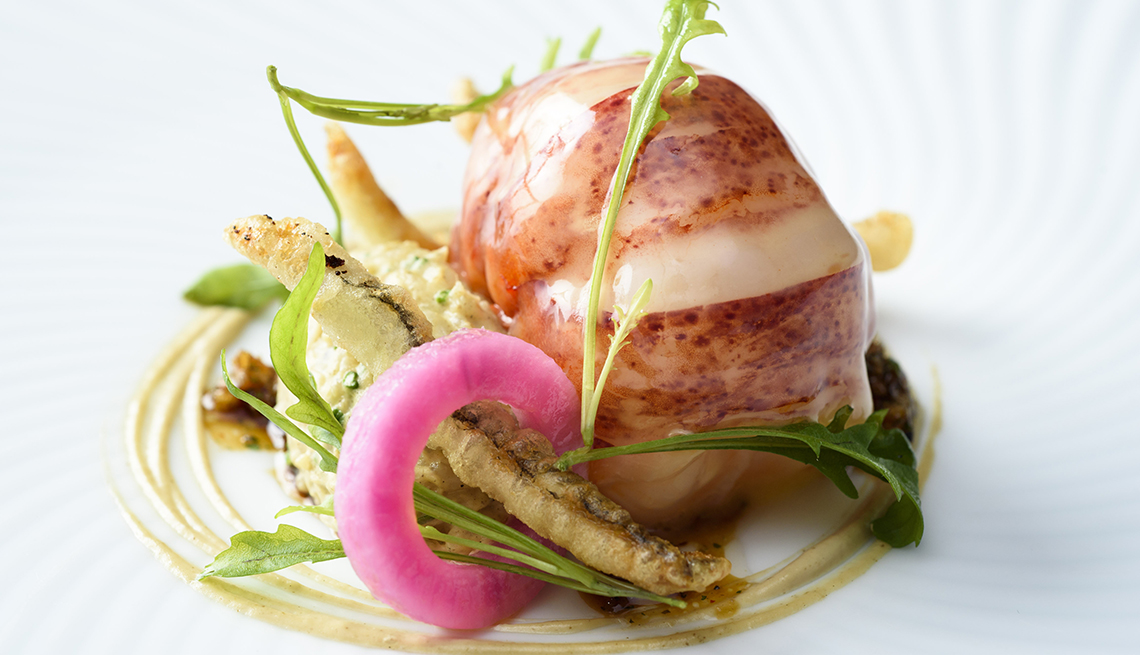 Sixty-seven restaurants in the San Francisco area were awarded Michelin Bib Gourmand designations Thursday, the beginning of the famous food guide's monthlong rollout of the best restaurants in that city; New York; Chicago; and Washington, D.C.

The Bib Gourmands are the lower-level awards at the Michelin Guide. They began in the late 1950s to recognize affordable restaurants —  gems where a diner can order two courses and a glass of wine or dessert for $40 or less (not including tax and tip). The symbol for a Bib Gourmand in the guidebook series is the face of the Michelin Man — looking a little like Casper the Friendly Ghost — licking his lips.

The Michelin stars, however, are the coveted prize. They were unveiled later in October.

It's hard to understate the anticipation in the restaurant world before the annual announcements. “If you’re an Olympian, you want to get a gold medal,” says Matthew Kang, editor of Eater LA. “The three Michelin stars is like that. It’s the ultimate stamp of approval that you’re a great restaurant.”

Says Michael Ellis, Michelin Guides’ international director: “People get absolutely beside themselves when the stars come out.”

Last year New York and the San Francisco area each had six restaurants given the superior three stars, meaning they offer “exceptional cuisine, worth a special journey,” including longtime winners Le Bernardin in Manhattan and Napa Valley’s legendary French Laundry.

With the bombshell-dropping of the first Bib Gourmand ratings, tongues will be wagging. “It feels a little bit like honorable mention,” says Michael Nagrant, a food critic for the Chicago Tribune, describing the Bib Gourmand rating. “But obviously in a city like Chicago where you have 12,000 restaurants, making that list is still impressive.”

The 26 Chicago restaurants that received one, two or three stars last year include two with the highest honor, and they won three-star status again this year: the elegant Grace and the real no-brainer, Alinea — a modernist culinary experience featuring a tasting menu of some 20 courses. It has been a three-star winner since Michelin included the city in its 2011 guide. Washington foodies were hopeful that they will get a get a three-star designation this year, but they didn't.

You won’t find any burger joints with three stars in any city. But Michelin's Ellis insists that the inspectors don’t care about fancy trappings: “The Michelin Guide is all about the food quality, and if we find a star regardless of the price we’re more than happy to give it.”

The anonymous reviewers look at quality of ingredients, cooking technique, the harmony delivered in the flavors, consistency throughout the menu over time and value for money.

Of course, that doesn’t mean restaurants don’t invest heavily in fine linens, beautiful decor and a robust, well-oiled staff in an exhaustive effort to earn or maintain stars. (One chef in Southern France caused a bit of a brouhaha a few weeks ago by doing the unthinkable: He declared he wanted his three stars taken away “to be liberated from the pressure.”)

Michelin, which began the ratings as a way to encourage drivers to take road trips with their new tires, has been in the United States since 2005, when it began rating New York City restaurants. Through the years its pretensions of crème de la crème have earned it plenty of criticism here and in the other 27 countries where it publishes guides. A Vanity Fair writer called it “Francophile and bloated and snobbish.”

And Michelin left a sour taste in the mouths of Los Angelinos when it published a Los Angeles guide in 2008 and 2009, then abandoned the city. It implied the food offerings there were not strong enough to warrant its continued presence.

The company had the same brief stint in Las Vegas, publishing its last guide there in 2009. However, that hasn’t stopped Vegas’s French hot spot Joël Robuchon — whose nine-course tasting menu will set you back $445 per person, not including drinks — from continuing to bill itself as an “unforgettable Three Michelin Star restaurant.”

Ellis is coy about whether Michelin has other U.S. cities — Los Angeles again, perhaps? — on its shortlist for guidebooks. He’ll say only, “We’re definitely looking around the United States and California, and will be able to confirm in the near future other regions we’ll be adding.”

But he loves when people question Michelin’s choices: “That shows passion, that shows people are interested, and that’s great. The worst possible thing for us is indifference — if people were to say, ‘Who cares?’ But that’s definitely not the case.”