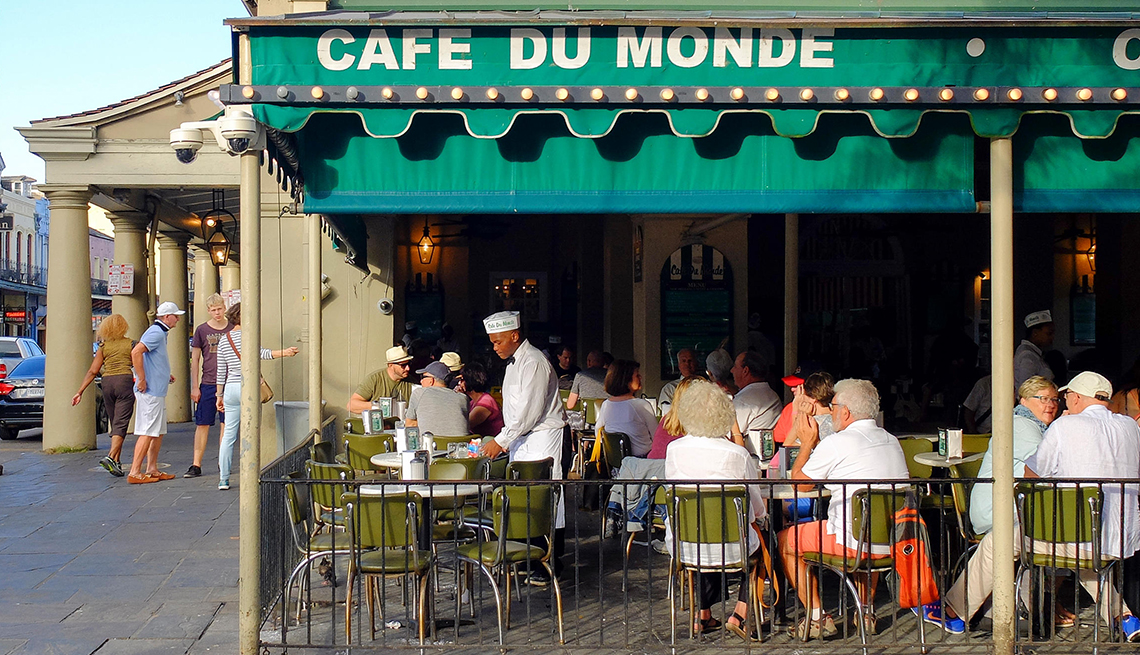 Cafe du Monde in the French Quarter of New Orleans is known for chicory coffee and beignets.

En español | Long gone are the days when Americans needed a passport to experience truly spine-tingling cuisine. Big cities such as New York, Chicago and Boston once led the way in bringing fine and innovative dining to the masses. But in more recent years, a bumper crop of newcomers has set up shop in second-tier cities and are offering the old-timers a run for their money. Foodies looking for a getaway that will leave them five pounds heavier but oh-so satisfied would do well to consider these unexpected corners of the country for their next long weekend.

The Crescent City is a perennial favorite for aficionados of one of America’s most enduring homegrown cuisines — Creole/Cajun. Home to some of the country’s most famous restaurants — among them the 177-year-old Antoine’s, the oldest family-run restaurant in the country; Brennan’s, the birthplace of bananas Foster; and Emeril Lagasse’s Meril — it also supports a constant influx of new kitchen talent. From awe-inspiring white-tablecoth experiences (the Caribbean Room) to holes-in-the-wall such as Coop’s Place on Decatur Street and Mother’s on Poydras Street, it’s hard to go wrong in New Orleans. Time your visit to one of the city’s many food-centric festivals, such as the Creole Tomato Festival or the Crescent City Blues and BBQ Festival, if you want to completely overdo the caloric intake.

Food and wine festivals are also a fixture of the foodie scene in the Texas capital, but the real reason to come here is for the barbecue. Carnivores go well out of their way for the city’s legendary smokehouses, among them La Barbecue and Lamberts in town, and the Salt Lick in nearby Driftwood. Expect to be served on butcher paper and to wait in long lines — especially on weekends. Being in a border state means Austin is a hotbed of fantastic Tex-Mex as well. Head to Mi Madre’s on Manor Road for spicy breakfast fare and Matt’s El Rancho on Lamar Boulevard, a favorite of President Lyndon B. Johnson's back in the day. In addition, Austin has a reputation as the food truck capital of America. Mobile offerings include everything from Turkish kebabs to deep-fried jambalaya on a stick.

Portland’s reputation as a den of hipsters and eccentrics is not far from the truth, but it conceals a culinary tradition dating back to James Beard, the "Dean of American Cookery"  and a native Oregonian. Organic and local-sourced food reign supreme here, and the Pacific Northwest has no shortage of it. Strawberries, morel mushrooms, oysters, game, salmon and crab abound, much of it infused with the flavors of recent immigrants. Pok Pok, Ataula, Bollywood Theater, Le Pigeon, Paley’s Place, Nodoguro are just a few of the names that pop up in any discussion of Portland’s thriving restaurant scene. As in Austin, the mobile scene is thriving here, too, with more than 600 food carts scattered across the city.

It's nicknamed the Holy City for the numerous spires rising above its compact 18th-century downtown — and Charleston’s food scene is worthy of a pilgrimage. Old standards such as Husk, with it’s nouvelle Southern cuisine, and McCrady’s, a ticketed-only tasting room with just 18 seats, have been joined by renowned newcomers such as Lewis Barbecue, where Austin pitmaster John Lewis has set up shop, and Leon’s Fine Poultry & Oysters, housed in a former auto body shop. Charleston’s culinary scene never rests, so each visit is likely to bring new surprises.

A crossroads of colonial America, New Mexico largest city has evolved very recently into a tantalizing mixture of Native American, Latin and European food traditions for which there is no shortage of purveyors. The "three sisters" of Native American cuisine — corn, beans and squash — are everywhere, as is the venerable fire-roasted green chili, which can be found in everything from tacos and cheeseburgers to cocktails. New-Mex classics include places such as Sadie’s of New Mexico and El Pinto, which have been joined by award-winning newcomers such as Frenchish and Los Poblanos Historic Inn & Organic Farm. City officials also have created a brand-new brewery district to corral many of the micro- and craft-brew operators setting up shop in town.

Rhode Island may be the smallest state in the union, but its culinary ambitions — boosted by successive waves of immigrants and the bounty that comes with being on the ocean — are much larger than its size. Old-school Italian fare is offered at the unassuming Mike’s Kitchen in nearby Cranston or at Al Forno on the riverfront, and more recent immigrants show off their bonafides at Los Andes (Peruvian), Ebisu (Japanese) and El Rancho Grande (Mexican). Seafood — including calamari, clams, lobster and local fish species like scup and fluke — is always available and always fresh at the elegant Hemenway’s and the Salted Slate.