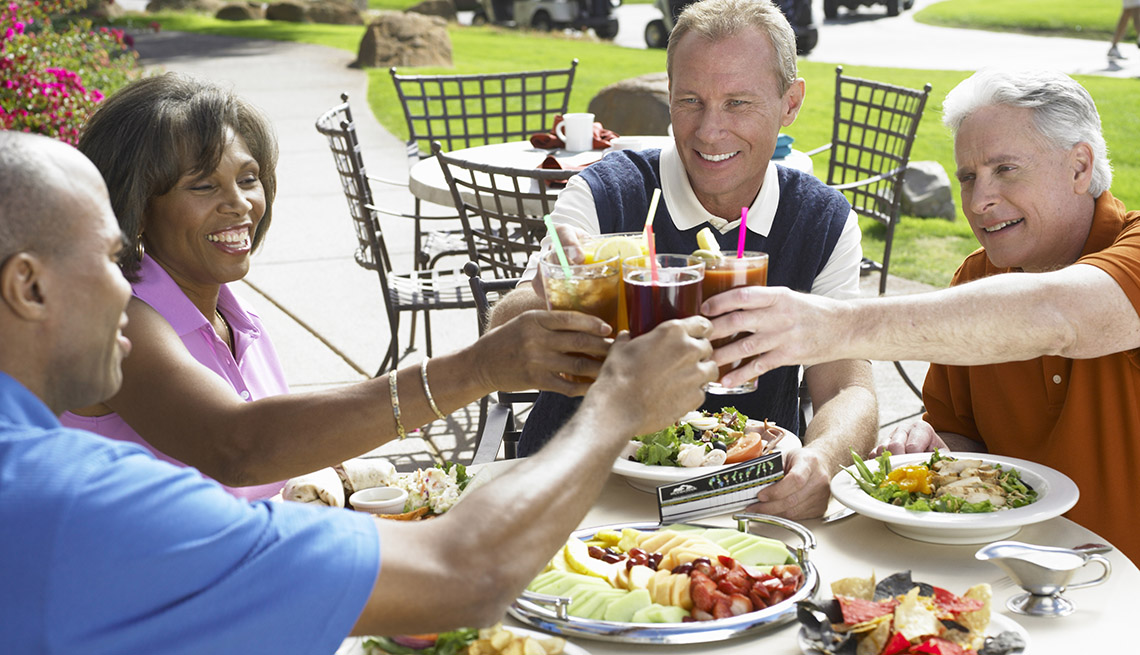 Cheers to great dining and golf.

Plenty of vacation spots offer an abundance of golf, and many other spots feature an array of gourmet restaurants that would make a foodie drool. But where can a golfing gourmet get both?

These destinations, perfect for couples trips, family vacations or a trek with golfing buddies, offer a tasty combination of world-class golf courses that are open to the public and fine dining spots featuring scrumptious regional dishes.

More than 20 golf courses dot the sandy dunes in and around the charming Southern coastal city. The crown jewel is the Ocean Course at Kiawah Island, which nestles up to the Atlantic and can seem disarmingly placid on a pleasant day. A stiff ocean breeze reveals its true challenge in a hurry. The Ocean Course is worth a splurge, but many of the other local tracks offer green fees under $100. Post-round, head in town to Broad Street or Upper King Street to relive your best shots over cocktails and low-country cuisine staples like she-crab soup or oyster roast.

The Cape spans just 65 miles as it juts out into the Atlantic Ocean and curves up around the Massachusetts shoreline, but golfers have nearly 30 public courses from which to choose. The most interesting may be the Highland Links at Truro, a 9-hole layout set high atop the gorgeous shoreline and offering breathtaking, blustery vistas. It's a short trip from there to Wellfleet or Provincetown, where fishing and lobster boats deliver their daily haul directly to markets and restaurants.

No word on whether the Founding Fathers were avid golfers, but the sport long ago invaded this colonial town. The Golden Horseshoe Club offers two first-rate public courses that wind through rolling hills and split rail fences. Nearby Kingsmill Resort features the River Course, which hosts an annual LPGA Tour event, among its three courses. Cool off with a chilled stein of ale at a local pub — be it college (William & Mary is right in town) or colonial — then secure a table at one of the authentic colonial taverns serving traditional fare. True foodies should plan ahead and reserve a stadium-style seat at A Chef's Kitchen, where culinary artist John Gonzales cooks up a nightly master class before diners who watch him prepare their meal.

The cliffs and shoreline on the gorgeous California coast two hours south of San Francisco offer the most amazing marriage of golf and gourmet dining in the country, and perhaps the world. Pebble Beach Golf Links, ranked by Golf Digest as the top public course in America, is a bucket list round for any duffer, but with a $495 green fee, it's a once-in-a-lifetime pricey bucket. Among the dozens of nearby courses are thriftier options, including Pacific Grove Golf Links, that offer similarly spectacular ocean views. Being situated smack in the middle of wine country means great dining options abound. Wine Enthusiast recently ranked Monterey County among the top 10 wine travel destinations in the world.

New Mexico's quirky capital city has a well-earned reputation as an artistic and cultural mecca, but few realize that great golf abounds, too. With the rising popularity of the courses that line the Santa Fe Trail between Santa Fe and Albuquerque, the secret is emerging. Famous as America's original highway to the West, the trail now features golf carts instead of horse-drawn wagons and comprises eight of the state's top courses, including two of America's 100 best — Paa-Ko Ridge and Black Mesa — according to Golf Digest. Nearly every variety of New Mexican cuisine (a little Tex-Mex, a pinch of Mediterranean, even a dash of chuckwagon) can be found on the trail, too. Be ready to answer the question "Red or green?" after almost every order. Not artistic options, they’re the choice of chilies to be served with your meal.