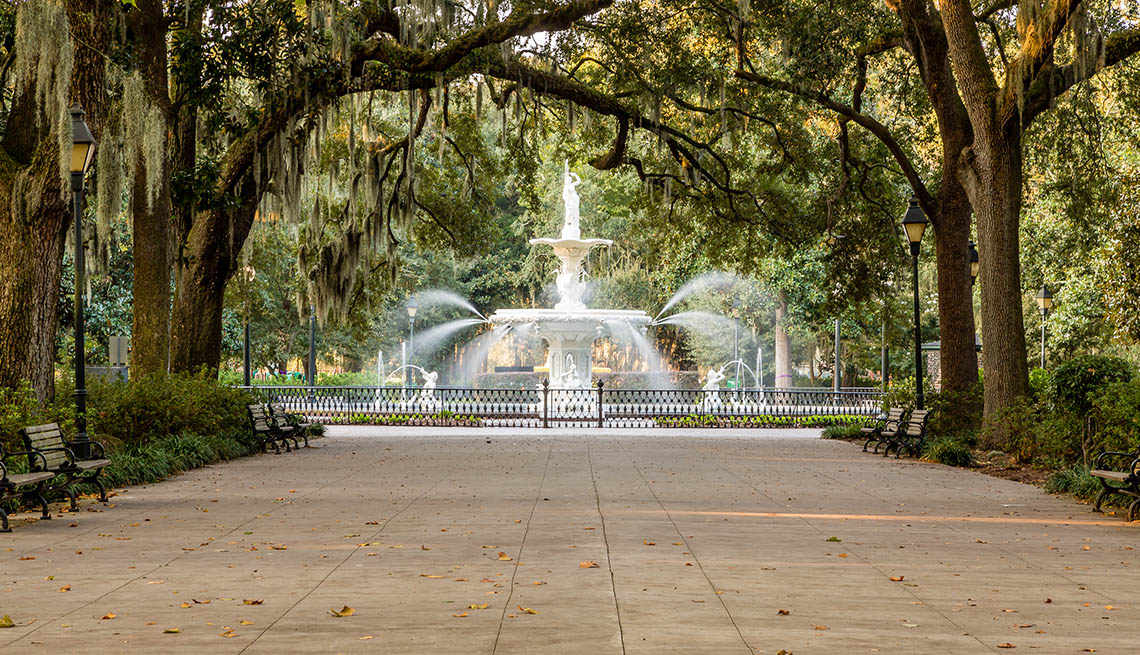 My husband, Eric, has never embraced romance in the traditional sense. Yes, he’s there for me when I need to vent or my laptop starts making funny noises. But after 25 years of marriage, it’s easy to tuck our affection and spontaneity into the same drawer as my long-forgotten lingerie. So when we headed to Savannah — even with amour in mind — I wasn’t expecting to be seduced by Eric or by the city itself.

Savannah, however, had me at hello. From the instant we dropped our bags at the Hamilton-Turner Inn, an 1873 mansion on Lafayette Square, I felt I’d found my Tara.

The city showcases stately Southern architecture, so we made our way to Jones Street to explore the preserved brick-and-stucco row homes. As New Yorkers, we usually race-walk from block to block, but the humid summer air, the Spanish moss weighing down tree branches along the route, and the slow clip-clop of the occasional passing horse and carriage slowed our pace to a steady saunter. Holding hands, we strolled to the nearby Soho Café, a renovated garage with high ceilings and intentionally mismatched tables and chairs. We shared a cinnamony peach cobbler before heading back to our room for a nap. Thankfully, no one fell off the charming double bed, which had to be at least four feet off the floor!

Wine and cheese primed us for a classic Southern dinner at the Olde Pink House on Reynolds Square, after which we set out into the velvety darkness to find the House of Mata Hari, a speakeasy hidden in an alley. I had an address for the place, but it has no signage, and the alley was poorly lit, so we wandered up and down until, finally, a man appeared from behind a wooden door. He asked if we had a key required for entry. We didn’t. But after giving us the once-over, he led us into a bygone era where a singer crooned a breathy rendition of the Sinatra classic “Fly Me to the Moon” and female bartenders wore bowler hats and black leotards that reminded me of Liza Minnelli in Cabaret. I ordered a kir royale; Eric, a martini — and we raised our glasses as we gazed into each other’s eyes.

Summer in Savannah made us crave a beach visit, and it was easy to hop a round-trip shuttle from the visitor center to Tybee Island, a 4-mile stretch of sand and ocean just 18 miles away. After a sun-filled afternoon, the Grey, a heralded restaurant in a former Greyhound bus terminal, was just the ticket. We shared a buttery rib eye and went for dessert at Lulu’s Chocolate Bar, where Eric and I fed each other strawberries. At that moment, I knew Savannah had worked its magic on both of us.