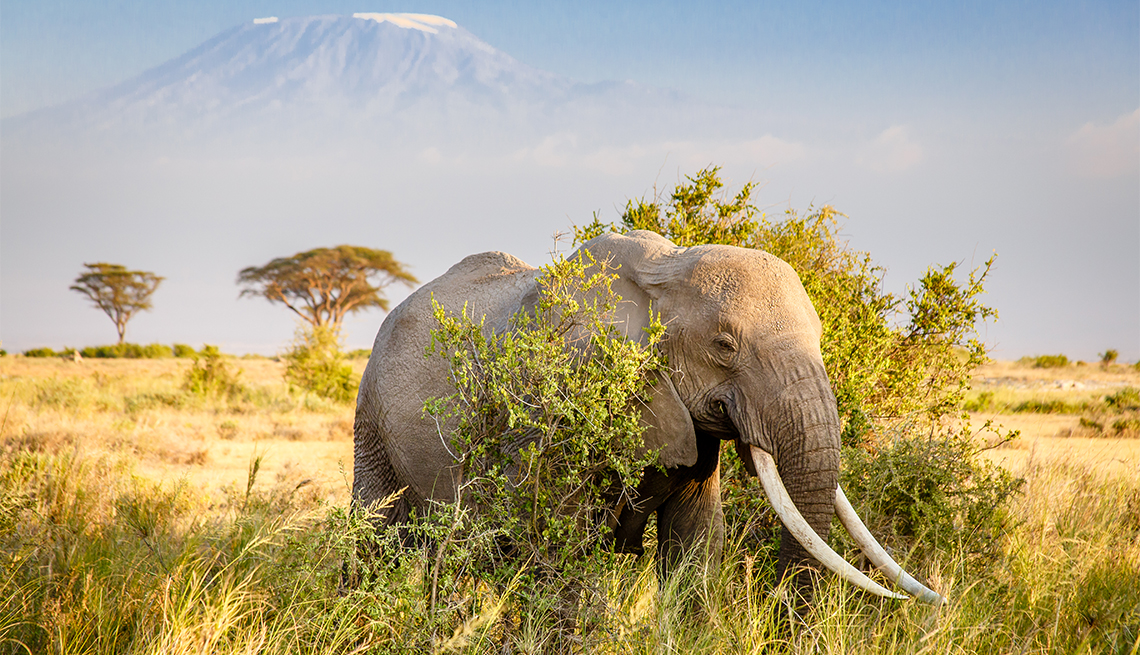 En español | An African safari is a bucket list trip for many — and after a spring of being homebound, the vast savannahs of South Africa's Kruger National Park and the wildlife-rich waterways of Botswana's Okavango Delta may never look more inviting. With flights grounded and borders closed, African safari companies and independent lodges have been finding creative ways to bring the sights and sounds of the bush as well as the expertise of their staff to living rooms around the globe, free of charge. Here, just a few creative ways to go on safari at home.

Singita — which operates 15 luxury lodges and camps across four African countries — in March started livestreaming virtual game drives in South Africa twice daily on Facebook and Instagram. As a result, Ross Couper, resident photographer and former guide at Singita Sabi Sand, a privately owned game reserve, has become a social media sensation. Couper's unscripted narrative combined with the unpredictability of the bush makes for entertainment that rivals anything you'd find on Netflix. Just like on a real safari, you never know what to expect when you tune in. You might see an adorable baby giraffe or a herd of elephants, but you also might see a pride of lions feasting on a buffalo kill.

On a recent outing, Couper excitedly tracked the sound of trumpeting elephants and found himself face to face with a massive bull. “Elephants have the right-of-way here,” he joked to the cameraman as he slowly reversed his Land Rover. Couper informed viewers that a herd of disturbed elephants usually means a predator — a leopard, lion, wild dog — in the area, so he drove onward in search of the culprit. Just a few minutes later he spotted a female leopard up in a tree. “Look at that,” he said, in genuine awe. “We're fortunate to see her.”

According to Lindy Rousseau, Singita's marketing director, these live safaris engage social media viewers much more than a straightforward photo post. The feeds provide an escape for viewers, but also ensure the wildlife are being looked after. With lodges and camps closed, there are fewer tourist vehicles in the bush, which means fewer eyes and ears on the ground to scare off potential poachers.

The popularity of the virtual safaris prompted Singita to begin livestreaming footage from its lodges in Tanzania and Zimbabwe, as well. To get alerts about live footage, just turn on the Live Videos push notification setting on Facebook and Instagram. People who can't tune in live can view saved footage on Singita's Vimeo page.

Africa-centric travel company andBeyond was also quick to start livestreaming footage at the end of March. Guides at andBeyond Sabi Sand Game Reserve as well as andBeyond Phinda Private Game Reserve, both in South Africa, have taken on additional patrolling responsibilities and share their most thrilling finds twice a day via Instagram Live.

The enthusiasm prompted the company to collaborate with wildlife broadcast pioneer WildEarth to stream three-hour real-time game drives on YouTube and Facebook at sunrise and sunset from andBeyond Ngala Private Game Reserve and Djuma Private Game Reserve in South Africa. Working via a director in a control room, the camera moves among three or four live feeds to bring viewers the most exciting wildlife action as it unfolds.

WildEarth cofounder Graham Wallington says the first broadcast on April 1 was the busiest since he started streaming safaris in 1998. “We usually get up to 35,000 unique viewers,” he says. “We had over 400,000 before our sunset safari was even finished.” To increase engagement, guides field queries from viewers as they post questions in the chat box on the right-hand side of YouTube or on Twitter using the hashtag #wildearth.

Camps and lodges with locations too remote for reliable cellphone coverage have been setting up live webcams around their properties’ wildlife hot spots. The magnificent view of Great Plains Conservation's ol Donyo Lodge, in the shadow of Kenya's Mount Kilimanjaro, is worth a peek simply to ogle, regardless of animal activity. A live webcam installed at the property's water hole offers the opportunity to glimpse a big tusker, fringe-eared oryx or the resident warthog. If viewers spot something interesting, they can click the camera icon on the live feed to snap a screenshot and share it via social media.

According to Hilton Walker, the company's managing director of sales and marketing, the live cam hasn't only increased social media engagement, it's also helped direct viewers to the company's conservation initiatives in hopes that they will donate. “Poachers are taking advantage of this time, and anti-poaching teams are combating these incursions on a daily basis with little or no pay,” he says. “An emergency pager Protection Fund has been established where support can be given to anti-poaching teams across Africa, not just on our land, to ensure that when you are able to travel again and see these electronic views you have right now in person, that that wildlife is there to enjoy."

Learn from the experts

Other safari businesses are using the downtime to educate and entice future safari-goers through live Q&As, tutorials and even talk shows. African Bush Camps has launched live talks via its social channels on themes ranging from the impact of COVID-19 on wildlife conservation to wildlife photography. Footage is saved on the company's YouTube channel for later viewing. The researchers and guides at Tswalu Kalahari Reserve in South Africa go live with Q&As via Instagram and Facebook every Thursday, weighing in on topics such as how climate change affects pangolins.

Wilderness Safaris has been sharing everything from guided nature walks and tutorials on the mighty baobab tree to live safari quizzes as part of its #IDreamofAfrica initiative on Instagram and Facebook. Keith Vincent, CEO of the 41-camp operation, says he hopes the programming keeps African travel top of mind so that people with bookings postpone rather than cancel and those who've never visited get inspired to go on safari when travel restrictions lift.

Asilia Africa's “The Journey Is Worth the Wait” digital campaign incites wanderlust by sharing popular camp recipes, hosting wildlife photographer Q&A sessions and, every Wednesday, posting Swahili lessons on Instagram. The mix of content serves as a reminder that the safari experience is essential not only to conservation, but also to help sustain the communities so many camps support. Conservation levies tacked onto safari stays are essential to keeping these programs alive. Asilia Africa, for example, charges a conservation levy of $5 per person, per night from bookings at its 23 camps and lodges in Kenya and Tanzania and uses it for community and conservation projects. This averages $200,000 annually, says Gordie Owles, the company's commercial director. An additional $80,000 a year comes from individual donors who are moved to donate after their safari experience. The hope is that until people can travel again, these grassroots digital initiatives will raise awareness and inspire donations to cover the levies and generous contributions that typically fund philanthropic work throughout Africa.