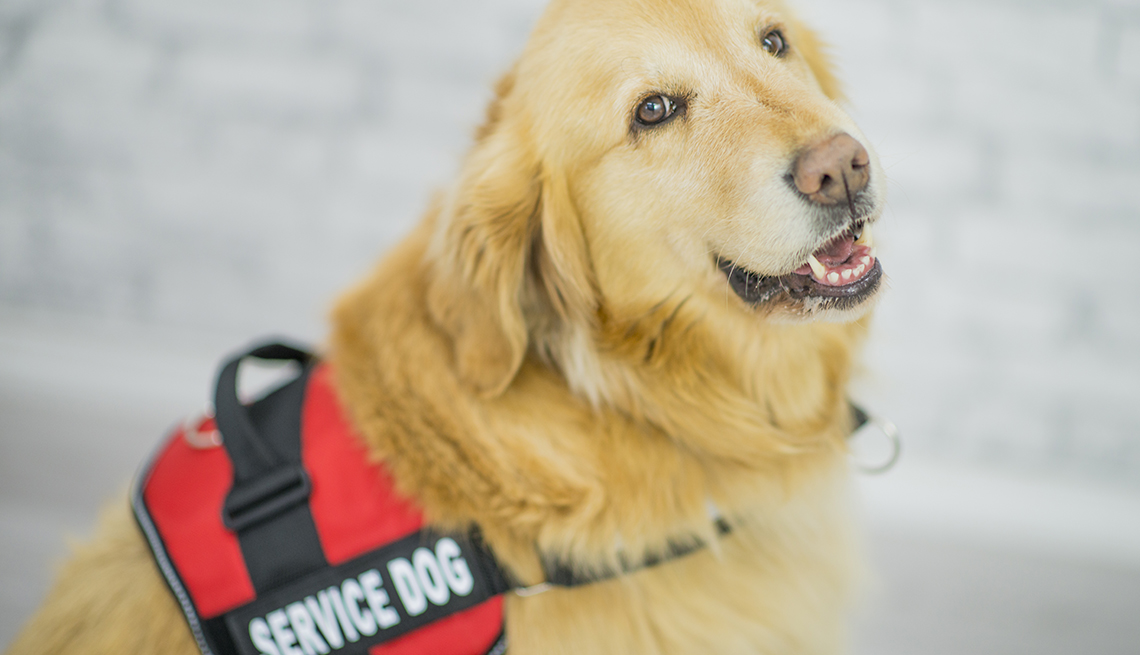 En español | Turkeys, gliding possums, snakes and spiders are just a few of the animals that passengers have attempted to bring on flights in recent years, according to Delta — one of the major domestic carriers that have tightened policies on passengers who want to fly with critters they claim are service or emotional support animals.

Delta says its crackdown is in response to a surge in problems resulting from travelers taking advantage of the Air Carrier Access Act, the federal law that requires airlines to accommodate service and emotional support animals at no extra charge. When announcing its new guidelines last January, the airline cited an 84 percent increase in reported animal incidents since 2016, ranging from urination and defecation to biting and attacks on other passengers — including the headline-grabber in 2017 in which a man attacked by an emotional support dog seated next to him needed 28 stitches.

But disability advocates are concerned that stricter airline policies will make travel more difficult for people with legitimate service or emotional support animals, who may already face increased scrutiny from airline personnel or other passengers in light of recent events.

"There's a lot of confusion,” says Theresa Stern, vice president of outreach, admissions and alumni services at Guide Dogs for the Blind, a leading guide dog training school. “Sometimes it's really innocent, sometimes it's not so innocent."

The first point of confusion for most people, she says, are the definitions themselves. A service animal is specifically trained to perform a task function for someone with a disability, like a guide dog for a blind person or a seizure alert dog.

Emotional support animals, on the other hand, aren't specifically trained to perform a task — they provide emotional support to someone with a disability. The category itself is legitimate but theoretically easier for people to take advantage of, since it doesn't require specific training.

Following guidance from the Department of Transportation, the vast majority of the new, stricter airline policies like Delta's target fraudulent emotional support animals, not service animals. Carriers now typically require recent documentation from a licensed mental health professional to be submitted 48 hours in advance of a flight.

Passengers with service animals can show up for their flight without advance registration or verification in most cases. That's because, by law, “credible verbal assurances,” like saying you are traveling with a service animal, not a pet, and explaining if asked which tasks or functions the animal provides for you (along with any harnesses, tags or other forms of identification) are considered sufficient proof — so long as your animal's behavior isn't dangerous or disruptive.

According to the Department of Transportation, cats and dogs are the service animals most commonly brought on board, but a variety of animals may be allowed — except for snakes and other reptiles, ferrets, rodents, sugar gliders and spiders, which airlines are never required to accept.

If you need a service or emotional support animal to accompany you on your flight, here's how to make sure the process goes smoothly.

Submit any documentation as required by your airline. Before traveling with your service or emotional support animal for the first time, Stern says to consider how your animal companion manages in terms of busy crowds, confined spaces and long stretches without the chance to relieve itself. You might even want to make a trial run, Stern says, by setting up some chairs and having your service or emotional support animal practice resting underneath them.

Stern also says that domestic travelers to Hawaii should note the special rabies requirements you'll have to clear to avoid having your animal quarantined. Expect to begin the process, which includes vaccination, microchipping and a blood test, three to six months before your trip.

The rules are also different for international travel. Foreign airlines flying to and from the U.S. are only required to accept dogs, and U.S. airlines flying internationally need to follow the destination country's rules. Before going abroad, check that your destination allows your animal and whether it sets additional requirements to enter and exit legally.

Passengers with service animals can show up for their flight without advance registration or verification in most cases.

Don't just bring a suitcase, but “pack your patience” and come to the airport armed with information, Stern says.

Be prepared to identify your animal companion to the airline representative upon check-in and to the screening officer as you begin the security process (both service and emotional support animals will proceed through the security process with you — any leashes, harnesses, saddlebags or other animal accessories will also be screened). To make sure boarding is as easy as possible, you might also want to inform the personnel at your boarding gate that you are with an animal, though this isn't required.

Don't forget about bathroom breaks before takeoff and after landing: Smartphone users can download the free Where to Go app to find animal relief area locations at U.S. airports.

According to the Department of Transportation, service and emotional support animals must be allowed in the space under the seat in front of you. That's where Stern, who is blind, has her guide dog, a black Lab named Wills, stay during their flights. Certain small animals may also be allowed to sit in your lap if they can do so safely — check with your airline for details. Animals can't block aisles or areas that need to stay clear for safety, and you may be asked to switch seats if you are seated in the emergency exit row or next to a passenger with allergies.

Once you're in the air, positive reinforcement can help keep Fido or Fluffy on its best behavior. Stern, for example, keeps kibble in her pocket. She also recommends limiting food and water intake prior to your flight to prevent accidents (ice chips can help prevent in-flight dehydration).

Stern recommends taking advantage of TSA Cares, which helps passengers with disabilities with the security screening process. Call the toll-free help line (855-787-2227) 72 hours before your flight with questions about what to expect. You can also ask for help from a TSA passenger support specialist the day of your flight.