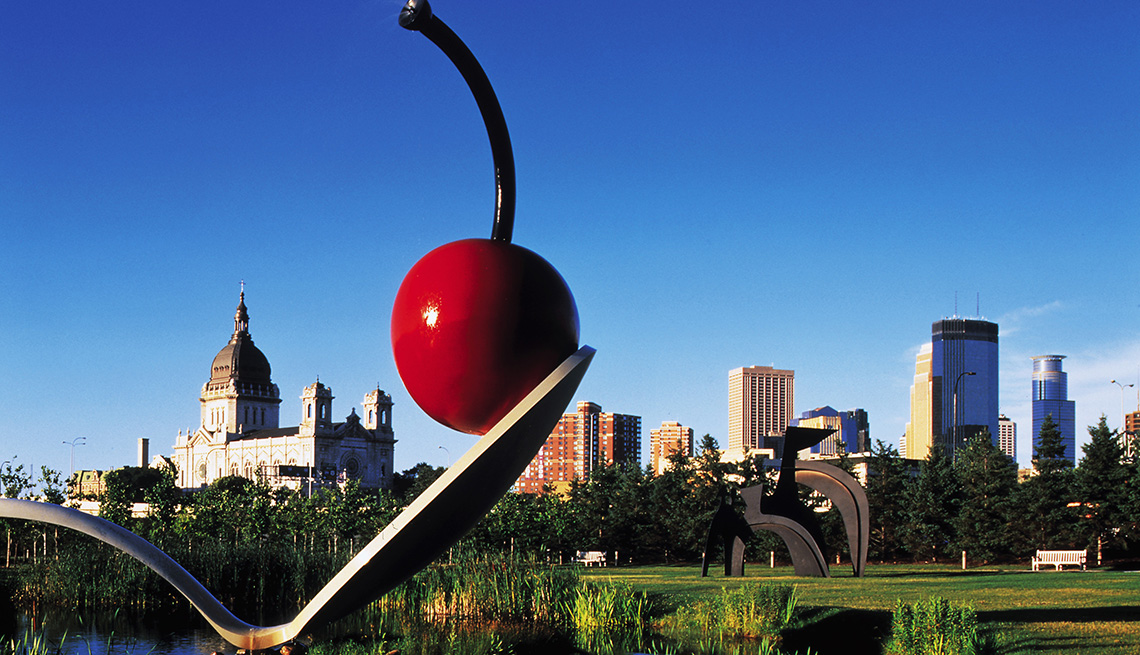 Spoonbridge and Cherry by Claes Oldenburg and Coosje van Bruggen at the Minneapolis Sculpture Garden.

While healthy living is a personal choice, where you live can help or hinder you from achieving your fitness goals. In 2011, the American College of Sports Medicine (ACSM) compiled a list of the fittest cities in America based on the American Fitness Index (AFI).

American cities with the fittest residents encourage good health through a variety of factors — by providing public parks, enacting smoking bans, promoting farmers markets and offering easy access to medical care. Here are the five healthiest cities in America based on ACSM’s findings.

The Twin Cities rank No. 1 on the ACSM list. The percentage of local parkland is higher here than most cities on average — Minneapolis alone has 22 lakes. Parkland stretches on both banks of the Mississippi River as it snakes its way between the two cities. According to the ACSM, residents here have a higher overall percentage of physical activity.

Minneapolis is one of the first cities in the nation to build biking trails and enact strict nonsmoking ordinances. The metropolitan area has low asthma and diabetes rates, and a high percentage of its population has health insurance. Although Minneapolis may not have many well-known medical institutions, Hennepin County Medical Center is highly respected within the medical community.

Our nation’s capital maintains a healthy mix of open public spaces, parks and recreational facilities — not to mention a fascinating collection of some of the finest museums in the country. The walkable streets and neighborhoods of Washington, D.C., create a semi-urban environment, though downtown does not feel overcrowded. The extensive public transit system makes carless commuting available. To the west of the city are beautiful mountains and valleys in Maryland and Virginia, and to the east are the oceanfront communities on the eastern shore of Maryland and the beaches of Delaware.

A coveted blend of accessible outdoor activities and big-city amenities sends Seattle straight to the top of the heap of the healthiest cities in America. The largest metropolitan area in Washington state isn’t known as the Emerald City for nothing. Seattle’s dense cluster of shimmering skyscrapers rises from a blue-green landscape of forested mountains, natural lakes, a sparkling bay and miles of oceanfront. Seattle, along with Portland, Oregon, has always been a haven for outdoorsy urbanites who can’t live without their mountain bike and camping equipment. Mount Rainier National Park, just a three-hour-drive from the city, entices residents with clean air, hiking trails and camping grounds.

The city’s consistently low smoking and heart-disease rates speak to Seattleites’ penchant for healthy living. Known in the medical world as being on the forefront of pre-hospital medical care, Seattle has always prided itself on higher cardiac arrest survival rates. Seattle also has a good mix of tertiary care medical centers and primary care providers.

Boston, on the other hand, is well known for its academic medical institutions. Harvard, Tufts and Boston University have each been important sources of top-notch medical research and cutting-edge technology throughout our nation’s history. Boston has the highest number of primary care providers per capita of any of the cities on our list. A compact urban center with good public transportation, downtown also offers many of its residents a car-free commute and access to ample outdoor spaces.

Boston’s low obesity rate speaks to a high concentration of healthy eaters. Perhaps they’re drawn to the city’s numerous farmers markets — Boston has about 28 farmers markets per million residents, according to the ACSM. Asthma is, however, a persistent problem, likely because of the Eastern Seaboard’s population density and heavy industry.

The magnificent City by the Bay is in our top five healthiest cities in America and ranks No. 6 on the ACSM list. The Bay Area has one of the lowest smoking and obesity rates in the U.S. San Francisco’s iconic hilly streets provide plenty of opportunities for turning a daily walk into an endurance exercise. The extensive public transit system offers easy access to charming urban parks, miles of beachfront and top-notch recreational facilities.

Regional parks and protected seashores north of the Golden Gate Bridge and the rolling hills of the Napa and Sonoma wine country to the northeast provide an outdoor respite within easy driving distance. San Francisco also has a keen focus on primary care and maintains solid urban clinics. Well-respected tertiary care centers providing advanced specialty care include the University of California, San Francisco, one of the nation’s finest medical schools and hospitals; and Stanford University, in Palo Alto, 40 miles to the south.