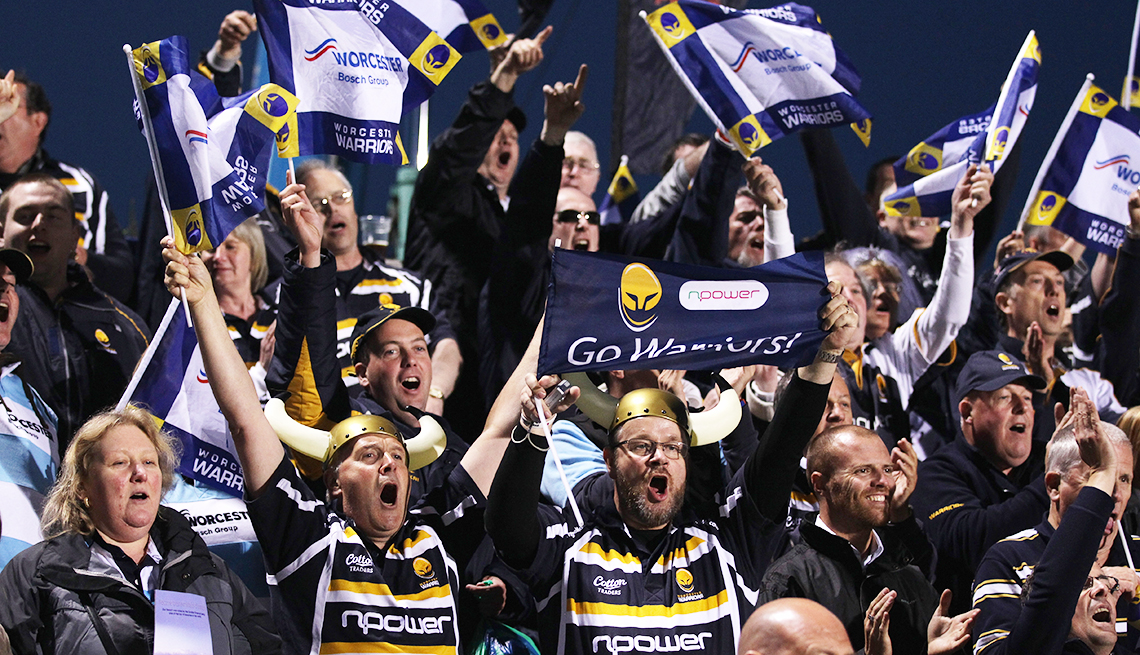 Fans cheer the Worcester Warriors at a playoff game in England.

This is my first rugby game — a match in England between the home team Worcester Warriors and the visiting Northampton Saints — so I’m unfamiliar with such Dr. Seuss-like rugby terms as grubber kick, mulligrubber, counter ruck and ruck.

No matter. I’m hooked. I yell with the roaring crowd in the 11,500-seat Sixways Stadium as the Warriors race for a score. I wince at the tackles, the violent thud of brawn hitting brawn. I marvel at steam rising from a scrum — like a huddle where players battle to possess the ball — on a cold, gray, drizzly afternoon.

My unfamiliarity with rugby is part of the appeal. When you attend sporting events while traveling, you experience a place in a non-touristy way. Think of it like this: If you wanted to share an authentic American experience with foreign guests, you might take them to a minor-league baseball game, right? It’s the same principle here, only instead of peanuts and Cracker Jack, we’re eating pea splash and Cornish pasties. (Pea splash is french fries covered with mushy peas. It’s tasty, though it looks like something from The Exorcist.)

I first discovered the joys of overseas sports by attending soccer games with British friends in Burton and Derby. I loved hanging with locals and soaking in the rowdy atmosphere. Unlike pro sports in the U.S., where teams entertain you every second with contests and T-shirt guns and shrieking AC/DC songs, in England fans create their own entertainment by singing. When Burton fell behind and their fans grew quiet, rival Coventry City’s supporters mockingly sang, “You only sing when you’re winning!” If the visiting team has few supporters in the crowd, home fans in Derby chant, “Come in a taxi — you must have come in a taxi!”

Rugby is the more civilized sport for spectators, even though the hulking players look like bulldozers in tight shorts. Here at Sixways Stadium, the crowd sings “Come On You Warriors” to the tune of “La donna è mobile” from Giuseppe Verdi’s opera Rigoletto. Before the game, when the opposing team takes the field, fans politely applaud rather than boo. And when a player from either team lines up for a kick (like a field goal or extra point in American football), the crowd hushes into silence. The scoreboard even posts a message: “Shhhh … Someone’s kicking.…”

The Warriors were in last place the day we attended, but prior to the match, as we roamed the small stadium and sniffed hot steak-and-ale pies and homemade faggots (a traditional British dish, they’re meatballs made with assorted pork parts), we chatted with two loyal fans who promised a victory. Three injured players were returning to action, they said, and sure enough, the Warriors won in an upset, 30-15, ending a four-game losing streak.

Afterward, I posted a photo from the game on Twitter and a woman in Worcester wrote, “Could you make it every week from now on, please? Looks like you are a good luck talisman.” I happily replied to my fellow fan, researched “rip” and then looked up “talisman.”

Other places where it's fun to cheer with the locals:

1. Baseball in Japan — Fans chant, dance, sing songs, bang drums, swing plastic bats and blow trumpets. Koshien Stadium in Nishinomiya is the Wrigley Field of Japan: It opened in 1924, and Babe Ruth played there in ’34.

2. Cricket in the Caribbean — It’s the national sport in countries such as Barbados and the Bahamas, and even if you dislike the game, you’ll get lush mountain vistas at Trinidad’s Queen’s Park Oval and elsewhere.

3. Gaelic Football in Ireland — The sport is like rugby with a round ball; players must bounce it or kick it once they’ve taken four steps. Catch a game at 82,300-seat Croke Park stadium in Dublin.