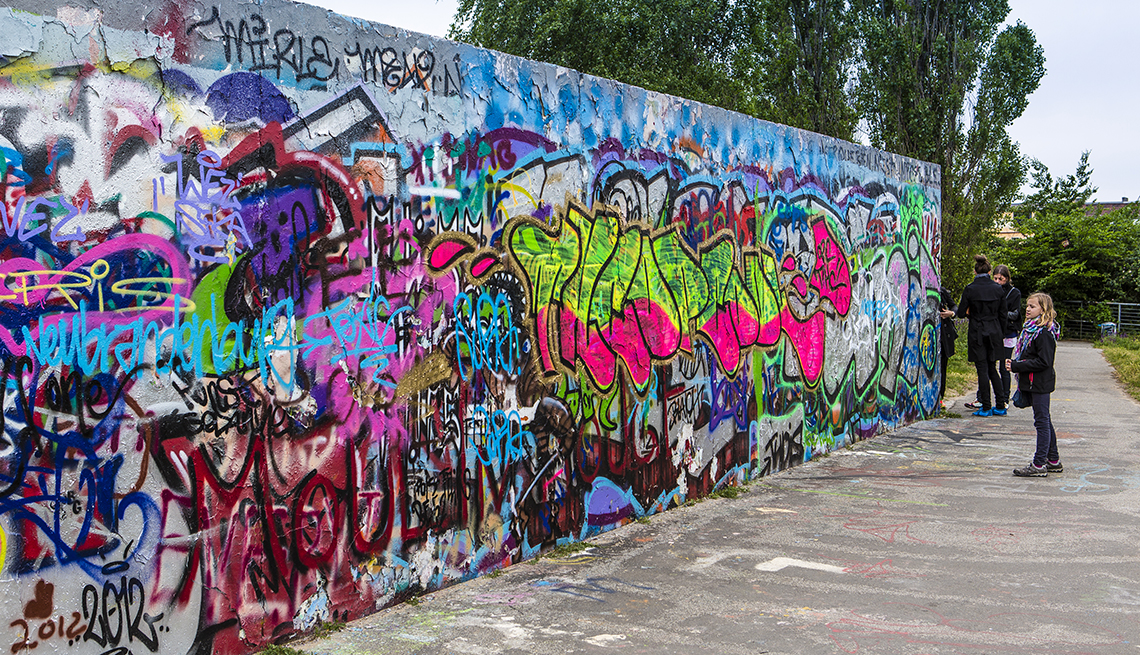 The Berlin Wall once separated East and West Berlin. It was constructed in 1961 and was torn down in 1989.

En español | Sophisticated, glittering, surprising Berlin: a city with a glorious, yet dark, history has been transformed into a haven for hipsters. I wanted to dive into it, so I decided to stay for an entire month.

The former East Berlin, though nicely spruced up since reunification, remains edgy, youthful and the opposite of pricey. My wife and I found an ultramodern two-bedroom apartment in the Prenzlauer Bergneighborhood (Friedrichshain-Kreuzberg is also hip and inexpensive), choosing to stay away from the core, or Mitte, with its crush of tourists. We were surrounded by chic shopping, a dizzying range of ethnic dining — all of it more enticing for its current ultra-affordability — and plenty of friendly English-speaking Germans and expats.

Getting around is simple on public transit. U-Bahn subways, trams and buses, and the larger S-Bahn trains, cover the entire city. We bought seven-day passes, and we were off. It was safe wherever we went, despite the ubiquitous but ever-inventive graffiti: we spotted some of the best of it on walls in the former East Berlin in Friedrichshain.

History is everywhere. You can visit the haunting Memorial to the Murdered Jews of Europe at Brandenburg Gate, and the famous Reichstag (make tour reservations early). Mauerpark (Wall Park) along the former Berlin Wall is now a weekend gathering place for open-air music, eating, drinking and being groovy. Another jaunt took us to Embassy Row at Tiergarten, an international celebration — in architecture — of reunification.

Eating is an international affair in Berlin. If you insist on a German meal, by all means go to Lutter & Wegner in Mitte; the food is tasty, if heavy. Middle Eastern food is ubiquitous. If you get homesick, check out White Trash Fast Food for some pretty good barbecue and rock music.

The thin-crust pizza at Adnan — one of our favorite restaurants in the former West — is sublimely fresh, the businessman's lunch special is a bargain, and the clientele includes many fashionable regulars.

Love shopping? Rows of smart boutiques await. One pleasant surprise: the giant department store Peek & Cloppenburg, just east of the Ku'damm. The suit I bought there for my daughter's wedding was ready, fully tailored, the next day (a Sunday, no less).

What to Know About Berlin

Language: English is widely spoken, but a handful of German phrases will come in handy.

Lodging: There are many fine, small hotels. For short stays, rooms range from about $110 to $200 a night, double.