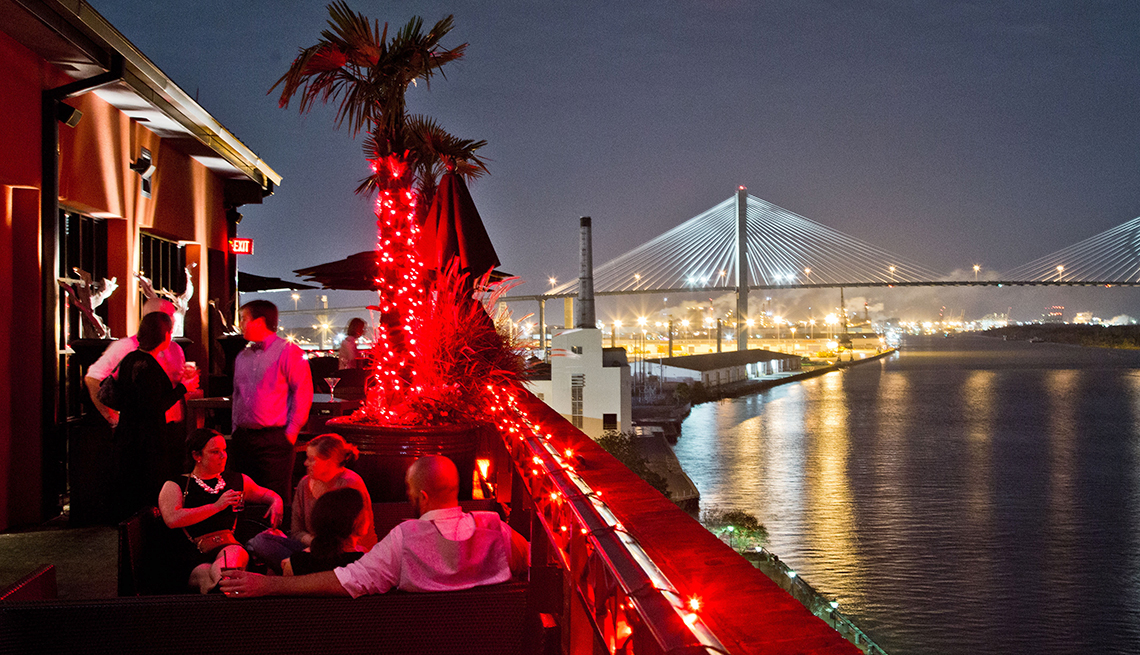 Although perennially in Charleston’s culinary shadow, tiny historic Savannah, Ga., is finally finding its gastronomic place in the sun. An influx of tourists based on the wildfire popularity of 1994’s Midnight in the Garden of Good & Evil and of Paula Deen’s cult-like cooking shows has sparked a new wave of innovation.

These days, Savannah’s hottest tables represent a city that is more diverse, more willing to experiment and more apt to embrace its native ingredients and techniques. From the multi-ethnic strands at the Grey to the Asian accents at Little Duck Diner to the elevated Southern traditions at Husk, dining in the Hostess City of the South has turned old-school Southern spreads into head-turning modern fare.

In this town, you’ll have plenty of opportunities to answer that question (and to carry your drink through the streets in a “to-go cup,” thanks to the open container policy), often paired with terrific food. Just be sure you can walk home on cobblestones.

Be prepared to eat a lot of food in front of strangers at Mrs. Wilkes’ Dining Room, a Savannah classic. A seemingly endless stream of bone-sticking Southern favorites — fried chicken, okra gumbo, beef stew, collard greens — is served family-style at communal tables. Line up early for lunch only, served 11-2 Mondays-Fridays, except in January, and bring cash (no credit cards accepted). The late Sema Wilkes took over this boardinghouse in 1943, and her family continues her recipes and traditions.

A big 18th-century Georgian mansion with a big menu to match, the Olde Pink House serves Low Country cuisine to Savannahians, visitors and plenty of wedding feasters. The menu feels special-occasion, from staples like fried green tomatoes and cornbread fried oysters to the fancier crispy duck with black vinegar glaze. Regulars frequent the Arches bar, where arched doorways open to sidewalk tables in nice weather, or the cellar tavern, where a warm fire crackles in the fireplace on cool evenings. Try the jalapeño margarita with the special blend of Herradura tequila and house-made jalapeño syrup.

Bay Street restaurants can seem touristy, but not locals’ favorite Vic’s on the River, which offers both beautiful views of the Savannah River from its rear tables and excellent she-crab soup, shrimp and grits, redfish with lemon buerre blancand more.  Check out the map fragment of Sherman’s March to the Sea, hand-drawn by Union soldiers and uncovered on a wall.

It’s hard to classify Elizabeth on 37th, which earned its former chef-owner Elizabeth Terry a 1995 James Beard Award for Best Chef/Southeast. But even the inventive dishes, like the pepper-crusted beef tenderloin with madeira cream sauce, roasted new potatoes and creamed spinach-feta torte, seem as though they might have been served on Savannah’s most elegant tables a century ago. Now run by Terry’s partners, it’s also a good place for such traditional dishes as the pork chop with five-cheese macaroni and apple-cabbage slaw, as well as spicy Savannah red rice with local shrimp.

The transformation of the Grey, an Art Deco-era Greyhound bus station into a sleek, streamlined “fine diner,” is remarkable, but no more so than the reinvented Southern food by Northern-trained prodigal daughter Mashama Bailey. Bailey earned a James Beard nomination for Best New Restaurant two months after opening in 2014 with dishes like seafood boudin, Chicken Country Captain (with curry, almonds and currants) and smoked collards. Referring to her menu as “port city Southern food,” Bailey calls on Savannah’s Southern, European and African traditions to create something both familiar and excitingly new, such as grits with foie and quail Madeira with red pea pancakes. If you can’t land a reservation, drop into the cozy Diner Bar for oysters, chicken schnitzel sandwiches and a Metroliner (rum, sorrel, Cointreau and lime).

Perhaps the most notable newcomer to the city is Husk, from Charleston-based star chef Sean Brock (his fourth version of the restaurant following those in Charleston, Nashville and Greenville). In 2018, the James Beard Award winner brought his seed-saving, heirloom-ingredient-loving, seasonal locavore ways to Savannah. In a menu that changes daily, Brock pays tribute to Savannah — pairing the city’s signature welcome bite, sesame-laden benne wafers, with pimento cheese and pork neck ham — while elevating Southern dishes such as the cracklin’ cornbread and pig ear lettuce wraps that were standouts at his original Charleston location. Husk’s bar is just as devoted to Southern ingredients — the Grass Roots cocktail is made with bourbon, sorghum and root beer cordial, sassafras, lemon oil and star anise.

Seasonal vegetables also get star billing at Atlantic, which treats them like prize catches (think stuffed mushrooms or beets with dill and pistachios). Plus, the restaurant shakes a mean cocktail. The Drayton, named for a Savannah avenue, is a take on a classic Boulevardier — Woodford Reserve bourbon, Campari and Benedictine. There’s plenty for pescatarians and carnivores to like as well.

Husband-and-wife restaurateurs Sean (“The Chef”) and Ele Tran have added to their growing empire with the retro-styled Little Duck Diner. The Trans serve hearty, hefty breakfasts and burgers at Little Duck, as well as signature Asian dishes like the Korean rice dish bi bim bop and ethnic mashups like barbecued duck egg rolls. Wash them down with an old-fashioned milkshake — or a tiki-style cocktail, like the Not Mai Tai Bellini (infused with a little guava).

A short drive from the historic district, the dockside Wyld restaurant reminds you of Savannah’s direct link to the sea — and its easy hospitality and charm. Go on a nice day to sit outside and enjoy local shrimp, quail and rabbit sausage, blackened daily catch and a Hemingway daiquiri.

El Coyote, a new Tex-Mex spot from the folks behind Wyld, serves coal-roasted chicken fajitas, lobster Rosarito (fried in pork fat, with salsa and basil), as well as familiar favorites like tacos, queso dip and tres leches cake. What could go better with them than a classic margarita or a Mexican Firing Squad (tequila, lime, hibiscus and bitters)?

New in the DeSoto Hotel, the 1540 Room offers handmade pasta (sunchoke tortellini, tagliatelle Bolognese), a roasted sirloin “meat-and-three” and torta de Santiago (almond cake with honey cream) from Chef Kyle Jacovino. Named for the year Hernando de Soto explored Georgia, the restaurant reflects Jacovino’s Italian heritage with a Latin touch. For example, you can go Italian with a Campari-spiked Negroni or Brazilian with a caipirinha, the national cocktail.