On trains and planes the transformation is obvious. The laptop computer is being replaced by a tablet, most often by Apple's iPad. No more juggling to find room on your tray table. No more struggling to hold a laptop steady on your lap while you try to type an email. The tablet is rapidly becoming the boomer's favorite traveling companion. 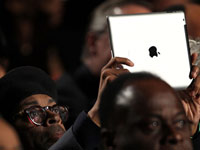 Actor and director Spike Lee takes an image with his iPad.

At this year's Consumer Electronics Show (CES), manufacturers announced they would be bringing no fewer than 82 tablet computers to market this year. Most are using the latest version of Google's Android operating system. The new "Playbook" tablet from BlackBerry maker Research in Motion has its own operating system but will also run Android applications. Some tablets run versions of Microsoft Windows, and Hewlett Packard is betting on the WebOS system it acquired when it bought Palm. And, of course, even though it wasn't at CES, Apple's introduction of the improved iPad 2 kept it in position as the head and shoulders market leader.

When I first saw the iPad, I was skeptical. I am a keyboard intensive user, so I didn't think it would replace my laptop. With 8 to 10 hours of battery life, it couldn't hold a candle to my Kindle's 10 days of charge. With 32 GB of storage, it didn't compete with the 300 GB of storage on my Archos media player.

But while the iPad didn't perform any of those functions perfectly, it performs all of them well enough to allow me to take it with me and leave a trunk load of the standalone gadgets behind. It's my electronic newspaper, my e-reader, my entertainment center, and my application and productivity tool for everything except document creation.

And I'm clearly not alone. The NPD Group, which tracks technology trends, says that migrating tasks from the PC to tablets is taking place "with ease and with high satisfaction for consumers." Its survey finds that 68 percent are satisfied with using the Internet on the tablet, and 67 percent satisfied with email on the devices. Since there were few non-Apple tablets in the market at the time of the survey, obviously this was mostly about iPads.

You can perform almost all of the same functions on a smartphone, but the huge boost in screen real estate makes using a tablet a completely different experience.

I can barely read the icons on an iPhone or Android device. No such problem with the tablet. I can watch a full-length movie, read a newspaper or a book, or use my favorite travel, weather, email and productivity apps without needing to squint, strain or magnify. And now that Apple has enabled Skype video calls with its front-facing camera, it is also usable as a communications device.

Do You Need a Data Plan?

One of the reasons that cellular carriers have been eager to start selling tablets is that they figured many tablet buyers would also buy a 3G or 4G connection and a data plan. According to Ross Rubin, director of industry analysis for NPD, that's not turning out quite as they hoped.

Many tablet buyers are never activating the 3G/4G service, finding they can get most of what they need in WiFi access. And if they do need a data connection where you can't find a hot spot, many of today's smartphones are capable of creating their own wireless hot spot.

It may not be the most efficient thing to do, but it's certainly cheaper than paying for two data plans.

Not All Tablets Are Created Equal

Many of the Apple competitors use the Android system, but some major differences exist among them. Screen size ranges from 5-inch diagonal on the Dell Streak (which some claim is more like a smartphone on steroids) to the 7-inch screens on the original Samsung Galaxy Tab and the BlackBerry PlayBook to 9 inches for the LG G-Slate and 10 inches for the iPad, the Motorola Xoom and the Archos 10

Among the other differences are speed, internal and removable storage, cameras, and the availability of an HDMI interface or a USB connection. The LG G-Slate even features dual rear-facing cameras for red/green 3-D recording, but you do need passive glasses to see those images. Several have a slot for a micro SD card, which gives you the ability to store more music, movies or documents. Battery life is another factor. LG claims the battery on its G-Slate will give you several days of use, while most of the others claim 8 to 12 hours.

Next: Tablets are part of an ecosystem. >>

If you're thinking of this as a device you're going to be spending a lot of time with, perhaps the most important consideration is whether it's part of an ecosystem.

When you buy an iPad, you're pretty much tied to Apple's iTunes and Apps Stores. There are also tens of thousands of apps available in the Android marketplace, while selections for BlackBerry and HP's WebOs are limited. One note on the RIM PlayBook: To use email, you need to have a BlackBerry smartphone. The PlayBook does not come with its own email application, so without a BlackBerry you'd need an Internet-based email like Google's Gmail.

The tablet is the new hot genre, and for good reason. You can use it to accomplish almost anything you can on either your smartphone or your computer, with two notable exceptions: despite the ability to do voice over Internet (VOIP), it's not likely to replace your phone. And for many people the virtual on-screen keyboards just can't substitute for the real thing. But if you're hitting the road, want to take your music, your travel guidebooks, your novels and your movies with you, you might want to remember that old American Express commercial: Don't leave home without it.