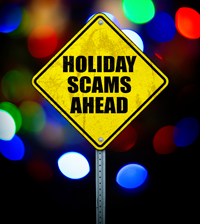 Data from this survey shows that most holiday shoppers failed a short quiz on how to stay safe from holiday scams, by answering four or fewer of seven questions correctly.  In addition, many report engaging in behaviors that put them at risk of falling for various holiday scams such as donating to suspect charities without confirming important details, purchasing gift cards from potentially risky locations, using debit cards that offer less consumer protections, using unsecured public Wi-Fi, or shipping and receiving packages without signatures. And many consumers indicate they have had at least one stressful life event occur in the past six months, which makes it more difficult to spot and resist holiday scams.