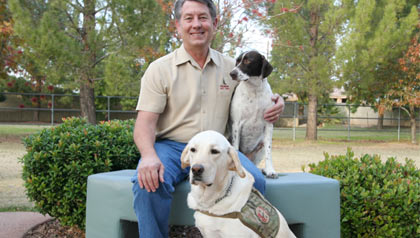 Two years ago, Phoenix veterinarian John Burnham saw that some of his clients were returning from Iraq and Afghanistan with post-traumatic stress disorder (PTSD) or traumatic brain injury (TBI). Working with animals every day and reading about research on animal-assisted therapies, he realized that psychiatric service dogs could help quell the veterans' intense anxiety, panic or fear of crowded spaces.

"It made perfect sense," says Burnham, 54, who owns three dogs and understood firsthand the bond between dogs and humans. "I knew the effect would be very positive."

See also: What's the best pet for you?

So in 2011, imbued with a sense of patriotism instilled by his father, who served in the Navy during World War II, Burnham launched Soldier's Best Friend. The nonprofit pairs vets who have PTSD or TBI with dogs from local shelters or, sometimes, trains a dog the veteran already owns.

The veteran and dog live together from the beginning of training, which involves twice-weekly sessions for three to five months for a therapeutic companion dog and five to seven months for a certified service dog. The choice between the two depends on the veteran's needs and the severity of symptoms. Although all the dogs go through basic obedience training and instruction to accompany their owners on an airplane, certified service dogs are trained and legally permitted to enter public places, such as restaurants, stores and the workplace.

A PTSD therapist and a dog trainer design a task list for each veteran and his or her dog. For most of the vets, easing anxiety is a priority. Typically, those with PTSD are anxious about crowds, so they avoid going out in public. Service and companion dogs can create a comfort barrier by moving behind or in front of the vet, and can be trained to touch their owner to help break an anxiety attack.

"Many veterans have horrific, reoccurring nightmares," explains Burnham. "They request that their dog be trained to wake them or turn a light on when the nightmare begins." Dogs are taught to respond to commands, but some learn to "read" their owners and take action when they sense an oncoming anxiety attack without being told to do so.

The program, which offers training in four Arizona locations, is free to vets. Dog food is donated, and funding for other expenses comes from charitable donations and fundraising events. Volunteer staff include Burnham, two PTSD therapists, a couple of veterans who help with public events and fundraising, and many others." The only paid workers are four professional service-dog trainers.

The program's first three pairs of veterans and dogs graduated in October, and Burnham anticipates 25 pairs will be in training or have graduated by the end of this year. Many more veterans — discovering Soldier's Best Friend through VA hospitals, veterans centers, soldiersbestfriend.org, and word of mouth — are waiting to enter the program. "There's increasing demand," says Burnham, who fields requests about establishing similar programs in other states.

Actual number of PTSD and TBI cases are probably two to three times the official 2010 estimates of 70,000 and 180,000, Burnham says. Those numbers don’t reflect veterans of the Vietnam and Korean wars and WWII who are still dealing with their trauma.

Soldier's Best Friend doesn't just benefit veterans. "Animal shelters across the country are filled to the max. They're looking for as many homes as possible for the dogs, so we're another source," Burnham says. "The program obviously benefits the veterans, but it also helps the shelters and whatever dogs we select."

Eleanor Gilman is a writer in New Jersey.