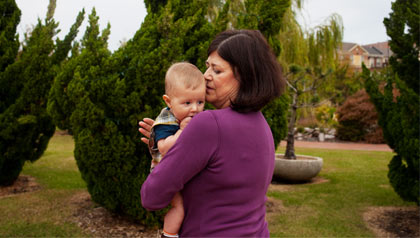 Patti Kiger, of Norfolk, got a whooping cough booster vaccine to make her time with grandson Carson safer for him. Highly contagious, whooping cough can be fatal for infants.

Patti Kiger thought only about protecting her infant grandson from a potentially deadly disease when she got a whooping cough booster vaccine. The needle didn't hurt a bit, but the first-time grandma would have willingly endured pain to protect little Carson from the respiratory disease that can cause difficulty breathing and death.

Kiger, 60, of Norfolk, understands the seriousness of the issue: Even for an adult who got the whooping cough vaccine as a child, immunity wears off over time. That's why it's usually a family member with a mild case of the disease who unwittingly passes it to infants.

See also: Hear the pertussis cough in an infant.

Prevention is relatively simple: A one-time booster shot called Tdap can protect adults from getting — and spreading — whooping cough. It also protects against tetanus and diphtheria.

AARP Virginia and the Virginia Department of Health have teamed up to combat the spread of the highly contagious disease.

Cases of whooping cough — also called pertussis — are on the rise nationwide. In Virginia, the number of reported cases increased from 128 in 2007 to 384 last year. Through September, more than 250 cases were reported.

Health officials cite several possible reasons for the increase in pertussis in Virginia, including increased recognition of the disease, more readily available testing and increased reporting.

But another is unvaccinated adults who care for young children who aren't old enough to have received at least three of the full series of five pertussis shots.

Adults who think they have a very bad, lingering cold or bronchitis actually might have a mild case of whooping cough, said Donald Lewis, M.D., professor and chairman of the Department of Pediatrics at Children's Hospital of The King's Daughters and Eastern Virginia Medical School in Norfolk.

"Unbeknownst to them," Lewis said, the illness "is pertussis, which they give to their precious grandbabies."

State health officials and AARP Virginia are relying on grandparents to take the lead as vaccine advocates within their families.

Many contracted or saw others sickened by debilitating diseases such as polio and "really understand how horrible they were for children," said Virginia Health Commissioner Karen Remley. "They have an obligation to get loved ones vaccinated. Our goal is that no baby dies in Virginia from a vaccine-preventable disease."

Six infants died of pertussis in the past decade.

When Kiger learned of the danger of pertussis, she emailed family members who will spend time with grandson Carson, urging them to get the Tdap vaccine.

Remley said diseases such as measles and whooping cough haven't been eradicated despite childhood vaccinations, and pertussis is creeping back because adults aren't getting the Tdap booster shot.

Michelle Charters, director of Project Immunize Virginia, said adults think vaccines are for kids. "But grandparents are often caregivers and need to be protected" so they don't spread the virus to young grandchildren.

"Babies will die if parents and grandparents don't get immunized to protect them," Lewis said.

The Centers for Disease Control and Prevention recommends that all adults receive a one-time dose of Tdap, especially if they are around preschoolers. Most children are required to be fully vaccinated against pertussis before they start school in Virginia.

Virginia has ordered extra doses of Tdap, Remley said. Free vaccines are available at 130 state health department sites for people who are in close contact with young children and who don't have insurance or whose insurance doesn't cover the shot.

Vicki Needham is a writer living in Reston, Va.