AARP Rewards is here to inspire you to learn and prepare for whatever life has ahead! Take a look.

I live in a rural community where I've known most of my neighbors for about 20 years. One family's kid, Janis,* is a bright and talented 30-something, but she's throwing her life away on drugs. She's living in a communelike situation, and her parents try to help, but they have their own alcohol and money problems. When Janis was recently arrested on drug charges, she and her parents asked me to post bail. I've helped Janis with financial issues before, but now I think she should learn her lesson the hard way. Her parents are worried she'll be hurt in jail, but I know Janis will never change if she can get away with things easily. Am I making a mistake? — Feeling Conflicted 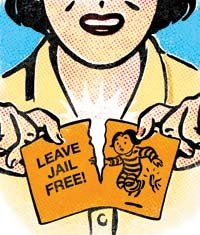 In our online community, you can ask for — or give — advice on topics such as love, friendship, grief, parenting, or grandparenting.

Your contribution could be featured in an upcoming issue of AARP The Magazine!

Join us in the Wisdom Circle. Do

Response #1 My brother had a drug problem for years. My parents finally said they would not give him (or any of us) money, because they needed it for their retirement. My brother was arrested shortly after this announcement, but my parents stuck to their guns. This forced him to face his problems — and he has since told our parents that refusing to bail him out was the best thing they ever did.

Response #2 Bailing Janis out of jail means bailing her out of the consequences of her actions. It is unfortunate that her parents do not see the potential here for real growth and an eye-opening experience for their daughter.

Response #3 They say that people have to hit bottom before they're ready to turn their lives around. Instead of posting bail, you might help by finding local Narcotics Anonymous and Alcoholics Anonymous meetings and encouraging Janis to attend them regularly. Maybe you could even suggest that to her parents, too.

I didn't post bail — actually another neighbor did, and Janis spent one night in jail. I'm convinced my decision was right, but I worry about the pain this caused her parents. Janis was so angry that she didn't speak to them for days. (She's being cordial to me, probably because she's now looking for a job and wants to use me as a reference.) She also swears she's off drugs. Now she's moving back in with her parents, who have set some strict rules — namely that her friends who use drugs can't visit. I hope her parents stick to their rules. And when Janis and I talk next, I will confront her about her drug abuse.

*Name has been changed.