Listen to a replay of AARP’s latest Coronavirus Tele-Town Hall, and join us at 1 p.m. April 2 for our next event. 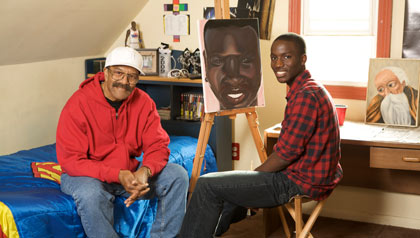 Creating artwork is one of the many interests Kevin Lewis shares with his grandfather, Charles Walker Sr. Kevin, a Detroit high school senior, won an AARP essay contest by writing about his granddad.

His grandfather's lessons were given quietly, but Detroit teenager Kevin Lewis wanted to shout out what they meant to him.

"I could never outgrow or not need my grandfather's guidance and example," he wrote last year.

See also: Build a strong relationship with your grandkids.

The widespread notion that there are no African American role models for younger men irked him, Kevin wrote in the "Why I Love My Grandparents" essay contest for students sponsored by AARP Michigan.

"I am determined to rebel against the stereotype that we, as young men, are destined to fill up jail cells," he wrote. "It is my goal to live up to what my grandfather has quietly taught me."

AARP Michigan is sponsoring the essay contest again this year.

"Many grandparents remain a loving and fun respite for their grandchildren, but they are also a pillar of emotional and financial support to the contemporary family," said Lisa Whitmore Davis, associate state director for community engagement at AARP Michigan.

The winning essay by Kevin, a 17-year-old senior at Detroit's Renaissance High School, was selected from among 160 essays submitted by Michigan students.

"Support is something that always came from my grandfather, whether it was coming to my Tuesday track meets or simply calling me to check on what is going on in school," Kevin wrote. "He never failed to make sure I had a ride to and from the many places I had to go."

Walker said he was unaware that his grandson had written the essay until after Kevin was named the winner.

"It made me feel real good," said Walker, 72, a General Motors retiree who lives in Detroit. "I was proud of that and proud of him, too."

The essay made it clear, he said, that Kevin had absorbed the life lessons that Walker had tried to instill in his grandson.

"When you're talking to the young people, you never know if they're listening or not," Walker said, chuckling.

Next: Kevin's essay made the crowd weep. >>

The ceremony at the Charles H. Wright Museum of African American History in Detroit "was standing room only," Davis said. "People were moved to tears" as Kevin read his essay aloud.

His own grandchildren are years away, but Kevin said he wants to be "the kind of grandfather that my grandfather is.

"I would make the effort to support and give encouragement where it was needed, not just one grandkid, but all of them," he said in an interview.

Also of interest: The unique role of aunts and uncles. >>

Rick Haglund is a writer living in Birmingham, Mich.