"When your only child tells you he doesn't want to see you anymore, it cuts straight to your heart, like a knife twisted and turned," says Deborah Jackson,* 61, a history professor in northern California.

See also: How do you cope with estrangement?

She's been there. Deborah and her son, Marcus, 26, were exceptionally close when he was a child, but became estranged after she and Marcus's father divorced in 2003. Around that time, Marcus left for college, and Deborah found it increasingly difficult to maintain her connection with her son. 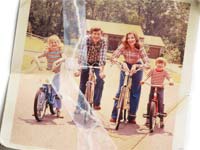 Experts say more adult children are choosing to stop all communication with their parents.

For reasons she still doesn't fully understand, Marcus stayed with his father on school breaks and seemed to call his mother only to chastise her. "I'd be walking down the street with tears streaming down my face, cellphone to my ear, listening to Marcus telling me all the ways I'd failed him," she recalls. "I'd done the best I could with my son, and clearly it wasn't enough."

When Your Kid 'Divorces' You

Despite her efforts, their relationship remained tense and distant. "Every day that goes by, I'm missing more of his life," Deborah told us last fall, her voice thick with grief. "I'm afraid I'll never see my only child again."

Experts say that Deborah's worry is more and more common. "In my therapy practice, I've seen a significant increase in parents whose adult children have cut them off," says Mark Sichel, author of Healing From Family Rifts and a licensed clinical social worker in Manhattan.

San Francisco psychologist Joshua Coleman, Ph.D., received so many requests for help with intergenerational conflict that he launched a six-session seminar, available via telephone or Web, for estranged parents. Coleman, author of When Parents Hurt: Compassionate Strategies When You and Your Grown Child Don't Get Along, expected about 50 parents to sign up for the first series. Instead, he got 400.

Save Money: Get AARP member discounts on travel, shopping and more

What's behind such family fractures? Coleman blames them in part on a me-first mentality that he says is weakening parent-child relationships. Our culture prizes individual fulfillment, with couples uniting and splitting based on their emotional needs rather than a sense of tradition or duty. In the same way, he says, "little binds adult children to their parents these days, beyond whether the relationship feels good to them."

*Some names and identifying details have been changed.

Next: Shouldn't Facebook make it easier to stay in touch? »

Also, Coleman says, the high divorce rate means fewer children see themselves as part of an unbreakable family unit. Even the conveniences that help today's single-parent and two-earner households function — such as prepared foods and cleaning services — reduce family members' dependence on one another, making the parent-child bond more emotional than immutable.

And technologies that seem to draw families closer together may actually contribute to estrangements, Sichel says: "Now that texts and emails are replacing face-to-face conversation, misunderstandings are easier to have."

Today, people are free to abandon unfulfilling relationships, says one therapist, but "what are we sacrificing for that freedom?"

The boomer generation's child-rearing style may play a role as well. "A lot of boomers came from very restrictive families," Sichel says. "We didn't make the kinds of demands on our kids that our parents placed on us, and that fostered dependency and helplessness. So our kids never learned to exercise autonomy in a healthy way."

Elizabeth Vagnoni, 56, is a filmmaker who is estranged from her two adult sons. She runs the website Estranged Stories, where people post painful personal accounts they may not have shared with anyone — even close friends. "It's hard to admit that your children are no longer speaking to you," Vagnoni says.

In an ongoing survey that Vagnoni hosts on her website, nearly one in three parents estranged from their children reported having contemplated suicide. That's almost 10 times the annual average rate for suicidal thoughts, according to the Centers for Disease Control and Prevention.

"There's a primal bond between a parent and a child," Vagnoni points out. "When that's broken, parents feel they've failed as human beings."

In Vagnoni's survey, 61 percent of alienated children said they would like to resume relationships with their parents, but only under specified conditions. Sixty percent wanted an apology. Nearly half of the young adults said they bore "no responsibility" for the estrangement.

Of course, some of those children are right. Manhattan therapist Irina Firstein says backing away from a parent is sometimes the best option: "When a grown child gets nothing but disapproval from an overpowering and controlling parent, he or she needs to separate to develop a healthy sense of self."

Next: The problem with growing up. »

But are psychotherapists partly responsible for the increase in family fractures? Joshua Coleman says it's possible. "The role of the 21st-century therapist is to help the individual experience deeper feelings of freedom and well-being," he says. "Today, people decide whether to remain close or distanced based on how immediately fulfilling the relationship is. What concerns me is, what are we sacrificing for that freedom?"

For Steve Sayre, 53, a San Francisco marketing director, the freedom was worth the sacrifice — until, one day, it wasn't. Afraid to tell his parents in person that he was gay, Sayre came out to them in a letter in 1982. "I was 24 years old, and I was a child of my mother's Chinese reticent ways," he explains. But Sayre's mother never saw the letter. His father told Sayre he had thrown it away — which triggered an estrangement that lasted a year. Sayre and his parents hardly spoke at all.

Finally Sayre summoned his courage and invited his parents to his apartment, where he said aloud that he was gay. "My mother reached for the box of Kleenex, weeping, and said, 'What did I do wrong?' " he recalls. But one month later she sent him a letter. "She said, 'You're my son. I gave birth to you, and I'll always love you for whatever you are,' " he recalls. "That was really nice."

Sayre pauses, then adds pensively, "The challenge for all children is figuring out how to grow up. That's what I was going through the year I didn't speak to my parents. And in that moment when I told them my truth and stood up for myself as a man — that's when I became an adult."

But even if a family splintering is fed by a child's immaturity, experts agree that the best way for parents to facilitate reconciliation is to change their own behavior and take responsibility for their own mistakes. (See box "When Your Kid 'Divorces' You" for additional tips.) When Deborah Jackson was able to do that, it opened a crack in the door her son had slammed in her face. "Looking back on it," she says now, "I saw that while I was going through my divorce, Marcus needed more emotional support than I was able to give."

She called Marcus and apologized, and he responded. "I seem to have moved forward with my son," she says. "I think partly it's due to my decision to let him live his life, and partly to his own understanding and growth.

"I spent time with him around the holidays," Deborah says with a broad grin. "You can only imagine how my heart soared."

Meredith Maran is the author of 10 nonfiction books. Her first novel, A Theory of Small Earthquakes, was published this year.