When did you last truly thank someone for bettering your life? Perhaps it's the barista who knows your morning coffee order, the mentor who provided insight, or a relative who bestowed love and values.

Conversely, have you regretted a missed opportunity to express genuine gratitude to a person, now gone, when there was still a chance to do so? 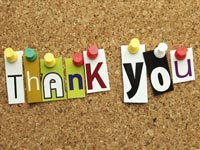 Walter Green and John Kralik, each in a new book, explain that expressing specific gratitude transforms the life of the giver as well as the receiver. They also believe that thanking people who affect or have touched our lives is the most doable of New Year's resolutions.

Neither man began expressing gratitude to others to gain praise, but did so because he believed it was good manners and the right thing to do. And who knows? An unintended consequence of their actions may even be a new civility movement.

Say it without delay
Walter Green, author of This Is the Moment! How One Man's Yearlong Journey Captured the Power of Extraordinary Gratitude (Hay House, $15.95), traveled across the world to personally thank 44 people who had significantly made an impact on his life.

For Green, his epiphany occurred in 2008 while listening to the tributes to Tim Russert, the moderator of NBC's Meet the Press, after his death at 58 of a heart attack.

It struck Green, now 72, that the outpouring of love, respect and affection flowed one way. He wondered: If the words said after someone dies are so meaningful, why not say them to the person earlier? "Most of us are only comfortable with the idea of talking about others as a eulogy or as part of everyday conversations. We're not comfortable with the idea of talking to them in a heartfelt way," says the retired CEO of Harrison Conference Services, a conference center management company.

So Green, of San Diego, decided to tell those who mattered to him how much he really appreciated them. He began his quest with a neighbor, then took his gratitude tour on the road. The journey included conversations with his wife, children, relatives, friends and former colleagues.

The book provides directions to the path to thankfulness. Green says only a few items are necessary to start a gratitude crusade — a pad for names, access to a computer to find people, and perhaps a recorder to capture the conversation, as a memory for you both.

Green also believes that people 50 and older are well suited to offer explicit thanks, since they have the wisdom of experience, and many are reconnecting with those who mattered in their lives. But, he says, act quickly because "expressing gratitude can never be done too soon, or you miss it."

While Green's gratitude epiphany came after the death of an honored newsman, writer John Kralik experienced his revelation after a period of personal turmoil.

On New Year's Day in 2008, after wandering off a hiking trail, Kralik, the author of 365 Thank Yous: The Year a Simple Act of Daily Gratitude Changed My Life (Hyperion, $22.99), was lost in the hills above Pasadena, Calif.

He was also an emotional and financial wreck — living alone, in the midst of a divorce, estranged from his sons, and 40 pounds overweight. His girlfriend had left him, and the law firm he founded was near collapse.

Kralik, 55, says that while despairing in the wilderness the words "Until you learn to be grateful for the things you have, you will not receive the things you want," entered his mind. That and the memory of his grandfather instructing him to express gratitude for whatever he received led Kralik to try writing 365 thank-you notes. It took 15 months.

The book tracks Kralik's personal recovery project and his growing understanding of the human need to be appreciated. His initial notes, thank-yous for Christmas presents, went to his two adult sons. They were among the only gift notes he remembered sending, he says, and brought his boys closer to him.

By February, under the influence of the "karmic success" of the missives, he began sending notes everywhere. Recipients included his building's superintendent, the woman at the animal shelter where his daughter adopted a pet, colleagues at his firm, and lawyers who battled him in cases. No one, he found, thought he'd gone nuts, and virtually all recipients responded with appreciation at the thoughtfulness.

The process also eased the weight of Kralik's myriad problems. "After a half-hour of writing thank-you notes, the murk of my fear, upset and self-pity seemed to dissipate," he says.

Soon when someone asked Kralik, "How are you?," he didn't moan but mentioned something for which he was grateful. Months passed, and his life began to turn around. His harried, and well-thanked, law office staff stayed with him and began sending thank-yous to each other, and clients he had thanked for paying their bills sometimes sent their checks early.

More than three years later, Kralik, now a judge of the Los Angeles Superior Court, still writes thank-you notes, but not at the same pace. By January 2011, he had sent about 650.

Kralik's rules for giving thanks are simple. He always writes a draft, writes from the heart, and writes notes, not letters, on 3-by-5-inch cards. That way, he explains in the book, "there is only room to focus on the one good thing that person just did for you, and your gratitude for that one good thing. For this one moment and this one communication, all else is left aside." He doesn't dismiss e-mail thank-yous, but says they risk disappearing in cyber clutter.

Occasionally Kralik takes a break from sending thank-yous, but says if he stops too long the old impatience surfaces. When he returns to the routine, he ultimately feels better.

"The more you write, the more good things happen to you," he says.

Frank McCoy is a writer in Catonsville, Md.