Jan Cassidy Wood and her siblings knew that if their older brother Jack Cassidy ever needed long-term nursing care, it would fall to them to find it. He was unmarried and lived alone, and since childhood has had serious health issues. After a stroke this past January, the 68-year-old retired mail clerk could no longer take care of himself in his home. 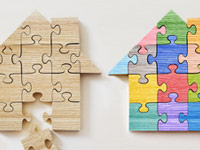 So Wood, a former high school teacher, researched 32 long-term care facilities in the Boston area. Finding up to four residents to a room on her visits, Wood found the places far from warm and fuzzy. The staff at short-term rehabilitation, where Jack landed after the hospital, kept asking her if she had found a bed.

Then, last February, Wood toured the Leonard Florence Center for Living, a new six-story high-rise in the industrial city of Chelsea outside Boston. Jack now lives there with nine other residents in what is called a "Green House," an innovative and growing alternative to long-term skilled care that looks, feels and operates more like a person's own house than a traditional nursing home.

A home that promotes growth

Say goodbye to long corridors, central nursing stations and multiple roommates. In the Green House model, each of the 10 to 12 residents has a private bedroom and bathroom connected to a common dining room, an open country kitchen where all the meals are prepared, a living room, and an indoor porch or backyard. Natural light, plants and freshly baked cookies abound. Everyone eats together at a long wooden table (unless they're unable), and in the living room cozy sofas and a fireplace invite residents, their families and staff to gather.

"Just as a greenhouse for plants is a place that is intentional about the environment to create optimal growth, we want to make sure we create that environment to promote growth for elders," says Susan Frazier, a staff project consultant at the national Green House Project and a former nurse. "It is reframing the whole way we view aging. While there are physical and mental losses, we are going to find those areas where there is still an opportunity to grow."

After a fall last winter, Jean Moore, 84, moved to Eddy Village Green near Albany, New York state's first Green House project. She and two women in her house like to do crossword puzzles together, sit next to one another at meals, read the same kind of books, and even take afternoon naps at the same time. Moore loved talking sports on the back patio with her housemate Harold. He died last month, but his daughter still visits Moore.

"I'm never lonely or bored, and if I don't feel right, someone is always there," says 90-year-old Ruth Birnbaum, a housemate of Jack's in Massachusetts. A neck pendant summons help wherever a resident — called an "elder" in Green House lingo — happens to be. Other discreet technology, such as an electronic lift in each room, easily transports residents who need assistance from their bed to their bathroom.

"When you walk into a Green House, there's a calmness," says Betsy Mullen, vice president of clinical operations for Chelsea Jewish Foundation, which oversees the Leonard Florence Center for Living. "It's more like you're walking into a home where they just happen to be getting treatment."

Green House residents call the shots as much as possible. At a time of life when so many things feel out of their control, they wake up and go to bed when they want, and there are no set visiting hours. "Somewhere along the line, when you have institutionalized care, it becomes what's easiest for the staff rather than what does the elder prefer," says Jaimy Farnan, administrator of Eddy Village Green. Farnan oversaw the large nursing home on the property before it was torn down to make room for 16 ranch-style Green House homes. Today, 12 people live in each house, a total of 192 residents.

Barbara George's 97-year-old mother used to live in that nursing home. "Although my mother had wonderful care in the old place, it was more like a hospital, and she was scared. I'd cry every time I'd leave her," says George. "In the Green House, she knows the staff well. My mother will tell them she loves them, and they do the same. She's gotten her identity back."

The same staff is permanently assigned to one Green House home, giving residents a feeling of security; it's also less confusing for those with dementia, typically 50 percent or more of residents who live in long-term care. Certified nursing assistants (CNAs), called "shahbazim" — which means "royal falcons" in the Farsi language — in Green House parlance, not only take care of residents' personal and medical needs, but also do their laundry and cook meals. A nurse floats between houses, and a physician, social worker or physical therapist is just a call away. Rather than having to wheel a big cart around, medicine is kept in a locked cabinet in each resident's room.

The Green House model may be a potent antidote to a health care industry known for its tremendous turnover. "I used to work in a hospital, where I didn't build relationships," says Wendy Barrientos, a CNA where Jack Cassidy lives. "Here, I know what the elders want for breakfast, what they like and don't like. I'm not just in and out and then go on to the next room. We sit and talk. I value them more as people, and they value me, too. They're like my grandmother and grandfather. I fall in love with them."

According to Alexandra Reilly, a nurse and colleague of Barrientos', "not only have I formed close relationships with the elders, but I get to be with them throughout the day, rather than just spend 20 minutes with each one. I know their baseline, so if anything changes, I can address it immediately."

Green House advocates point to studies that show the model's positive impact on residents' quality of life as well as improved satisfaction for their families and staff. Skeptics have questioned whether a model that gives CNAs so much responsibility (cooking, laundry and medical needs) can provide comparable clinical care as a traditional nursing home — not to mention the same amount of direct care.

One soon-to-be-published study shows that residents receive a similar amount of direct care with both the traditional nursing home and Green House models. At Eddy Village Green, Farnan used the same clinical indicators to compare residents in their old nursing home to those in their Green Houses, finding fewer falls and less depression, weight loss, agitation, pain and crying out for help in the newer model.

"The staff knows when the residents are quieter than normal or in pain, and there is so much less institutional noise than in traditional skilled nursing units," says Laurie Mante, vice president, Residential Division, of the Eddy Village Green and was involved in the study.

New model for a new age

Since geriatrician William Thomas, M.D., created the first Green House homes in Tupelo, Miss., in 2003, more than 100 have been constructed in 26 locations across the country, with about 100 more in development. Typically, they are built as a cluster of single homes in suburban or rural areas. The Leonard Florence Center for Living is the first urban Green House in the country, comprising 10 homes in a building. They're more like condos, with two separate, self-contained living areas per floor. Visitors get off the elevator, find the right mailbox, ring the doorbell and wait for the staff to let them in, just as they would in any freestanding home. Like many Green House projects, this one is part of a health care campus that includes other medical facilities, such as assisted living.

"With Green Houses, we are planting the seeds of the new American nursing home," says Thomas. "We are building what the boomers will rely upon when it's their time."

Or even before. Many nursing homes were built in the 1950s and 1960s and are due for major renovations, if not complete do-overs. In remote Seward, Alaska, the only nursing home in town was replaced last year with four Green House homes. A $10 million grant from the Robert Wood Johnson Foundation in 2005 to replicate the Green House model across the country has propelled this new, skilled long-term care option.

A typical Green House home costs $1.2 million to $1.8 million to construct, comparable to a new traditional nursing home with private bedrooms, bathrooms and equivalent common space. Experts claim the operating costs for both kinds of skilled nursing homes are similar. But because Medicaid doesn't factor into its reimbursement rates the cost of the additional square feet required for private bedrooms and bathrooms, Green House and other new models of skilled nursing care are difficult to provide to those with low incomes. This means Green House homes need to have extra subsidized funding. On average, 50 percent or more of Green House residents receive Medicaid, and 30 percent are privately funded; the rest have other funding sources.

The cost of a Green House home ultimately depends on location and amenities. The price tag for the Chelsea, Mass., project was $3.7 million for each house — there was complicated site work, top-of-the-line furnishings and kitchens, art, ceramics and glassware throughout, a café, chapel, deli and swanky lobby with a fountain — while the ones in Arkansas were built for under $1 million each.

While Thomas wants to abolish old-style nursing homes, Barry Berman, CEO of Chelsea Jewish Foundation, believes traditional nursing homes are not going away and can still do a good job.

"But in order to survive," Berman says, "they have to embrace culture change by making them more homelike and as noninstitutional as possible, and give residents more choice."

Says Farnan of Eddy Village Green: "I want to create a place I wouldn't mind putting my parents if they needed it. My feeling is that if this isn't the answer, it's closer than the old way of doing things."

For more on Green Houses, go to www.thegreenhouseproject.org.

Sally Abrahms, a writer from Boston, wrote this article as part of her MetLife Foundation Journalists on Aging Fellowship in partnership with New America Media and the Gerontological Society of America.