Can a child be tried and convicted of criminal neglect or homicide for failing to take care of the medical needs of an elderly parent?

Johnnie Scott, a feisty 83-year-old, had lived in her house in Monroe, La., for 28 years. She lived with her biological son, Stanley Scott, her informally adopted daughter, Barbara Smith, and two adult grandchildren.

Johnnie had given the back room to a grandchild, and slept on the couch. Since retiring, she enjoyed sitting on the porch drinking beer and smoking cigarettes. Stanley cashed his mother's checks, paid the bills and bought her necessities. Johnnie ruled over the household with an iron fist.

See also: Caregivers can get paid.

During the fall of 2001, Johnnie had been spending more time on the couch. Soon, she could not move herself off it. She used a bucket as a bedpan, a practice she started before becoming couch-ridden.

Johnnie's children and neighbors urged her to get medical help, but she refused. When she stopped eating in late December 2001, Stanley called an ambulance. Johnnie was alert, one paramedic said. The paramedic did not see bedsores when checking her upper body, though her blood pressure and pulse rate were both a little high. Johnnie refused to leave the house, and the paramedics left.

A little over a month later, Stanley called the paramedics again. Johnnie looked "real sick," according to one EMT, and there was a strong odor of feces and urine. At first, Johnnie would not leave, slapping at a paramedic and knocking off his glasses. Eventually, she agreed to go. When the ambulance personnel picked her up they saw feces, urine, pus and blood in the couch. Johnnie's gown was covered with feces and urine, and she had bedsores.

Horror at the hospital

At the emergency room, Johnnie barely responded and was seriously dehydrated. She stank from dried and fresh urine and feces that covered her body. She had multiple scars on her leg from bedsores, one on her hip and a large fresh wound on her leg. A nurse filed a complaint of suspected elder abuse with the police.

When the police arrived, they found Johnnie in too much pain to talk. She screamed when the nurse rolled her on her side to show officers the wounds. The police went to Johnnie's house, finding it "one of the filthiest" they had ever seen. The couch was sitting outside, emitting a strong foul odor. The couch had an exposed spring, which police believed caused the gaping wound on Johnnie's leg. One of the cushions had some flesh on it.

After she left the hospital, Johnnie went to live in a nursing home.

Next: Mother forcefully refuses help from her children. >>

On March 4, 2002, Stanley and Barbara were charged with one count of cruelty to the infirm. They argued that they did the best they could with their mother, despite her forceful refusals of help and her threatening manner. Barbara's cousin, Jackie Ricks, testified to Johnnie's willful nature. Ricks said that she visited the house on the day Johnnie went to the hospital. When Ricks tried to get Johnnie off the couch, she "pulled a knife" and told Ricks to leave her alone.

Barbara testified, too. She admitted that she had some nurse's aide training, but had not completed the course. She knew that her mother was sick and unable to move around, so she never left her unattended. She wanted her to see a doctor, but her mother refused. Barbara fed her mother soups, soft drinks and nutritional drinks, and tried to move her. She succeeded in getting Johnnie to a sitting position one time, but her mother's "dead weight" made her impossible for Barbara to move.

Barbara bought her mother disposable diapers, but Johnnie would "holler" and fight her when she tried to change them. Johnnie also refused to go to the bed where Barbara could clean her easily. Barbara said that she tried to clean Johnnie often by wiping where she could reach. Barbara said that she never smelled the foul odors, and told the court that her bronchitis probably affected her sense of smell.

Barbara said she had been taught to "mind" an old person. She also knew her mother kept a knife.

Stanley also testified that his mother ruled the household. Johnnie told her son that "if you make me go, I'll never forgive you." Stanley noted that after Johnnie moved into the nursing home, she continued to battle her caretakers. Johnnie's children said they did the best they could, and should not be punished for all their efforts to change an impossible situation.

Should Barbara and Stanley be charged with cruelty? How would you decide? 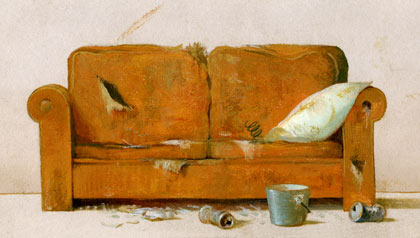 Jury finds children guilty of a misdemeanor and felony.

A six-person jury found Stanley guilty of a misdemeanor, but convicted Barbara of attempted cruelty to the infirm, a felony. She received a five-year prison sentence of hard labor, but it was suspended to five years of supervised probation.

Barbara appealed. In 2004 the 2nd Circuit Court upheld the conviction, noting that Stanley and Barbara did make attempts to help their mother, but those attempts were not enough. "They had a duty to intervene on and insist that she either submit to their efforts at proper sanitation or go to a hospital or nursing home to be cared for by others."

Barbara's attorney, George Britton III, said he counted Barbara's conviction as one of the greatest injustices he had seen in his career.