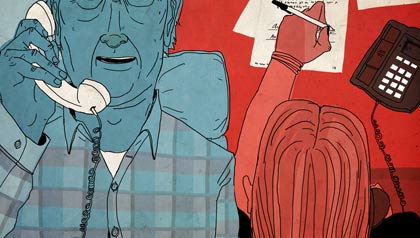 Can a father's gift to his daughter be taken away?

Editor's note: Hear Ye! Hear Ye! explores a real court case. This particular one took more than two decades to resolve. Read about it below and decide how you would rule. Then read the actual verdict and let us know whether you agree.

In 1978, Austin and Thelma Stephens, who lived in Southern California, prepared crossover wills, which meant that they transferred all their real and personal property to their children, Lawrence and Shirley. They divided their assets equally between them.

When Thelma became seriously ill with cancer, Shirley became her primary caretaker. Shirley worked two jobs, but she drove her mother to every chemotherapy treatment. Shirley lived two houses from her parents and installed an intercom so her mother could reach her at any time.

Shirley also took care of her father's other basic needs. She prepared her father three meals a day, cleaned his pool and house, washed his clothes, watered his plants, purchased his groceries and cared for his pets.

Shirley's brother, Lawrence, did not help with the daily activities of caring for his father. A year after Austin's health declined, Lawrence moved from California to Colorado to retire. He visited Austin once or twice a year.

After Lawrence left, Austin gave Shirley his power of attorney and specified that he wanted her to handle his personal property and real estate. A year later, glaucoma claimed Austin's sight, and Shirley had to be Austin's eyes as well.

Next: Did Austin have to be present when Shirley signed the deed? >>

Austin decided to give Shirley his home as a gift.

He told his daughter, in the presence of his best friend, Delbert Catron, to sign his name to the deed that made Austin and Shirley joint tenants of the house. Shirley signed the deed using her father's name and had it notarized. Austin was not present, but Shirley immediately called him to say that she had followed his instructions.

The county recorder's office called Austin to be sure he intended the transfer of the property to be a gift to Shirley. Austin confirmed that he did. After the deed was recorded, it was mailed to Austin. He asked Shirley to put it away for safekeeping. He also talked to his friend Delbert several times about the property transfer, and confirmed that Shirley had followed his instructions.

When Austin visited his brother in Florida, he told him he had "disinherited Larry."

Austin died in 1994, and Lawrence started litigation to get the house back into Austin's estate so that it could be divided up according to Austin's will. Lawrence argued that real property can only be transferred by a valid, signed document, and that Shirley's signature could not be substituted for that of her father. Even if she signed based on Austin's express authority, as an instrument or "amanuensis" for him, he needed to be present when she signed. In addition, even if the signature was deemed valid, it is fraudulent for Shirley to benefit from the document that she signed on Austin's behalf.

Should Shirley get to keep the house? How would you decide? 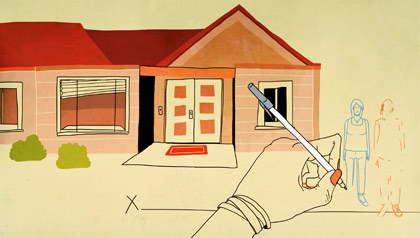 The Supreme Court held that Shirley didn't need to sign the deed in the presence of her blind father.

The trial court determined that Austin wanted Shirley to sign the deed for him. He was mentally competent and capable of saying the deed was not valid if he had wanted to do so.

The trial court stated that "Shirley's signature of Austin's name was a purely ministerial, mechanical act." The trial court held that because Austin had instructed Shirley, and had shown that he agreed with her action, the signature was valid and the house belonged to Shirley.

Lawrence had died by the time of the trial court decision, but his daughter took up the appeal. While it was pending, Shirley passed away, but her children continued to defend the lawsuit.

The Court of Appeal reversed the trial court. It held that Shirley could not convey the property to herself as a gift, and that Austin had to give a written, not oral, ratification of the deed. The Court of Appeal also rejected the amanuensis theory that Shirley was an instrument for her father, because the deed was admittedly not signed in Austin's presence.

Shirley's daughter appealed to the Supreme Court of California. The court agreed with the Court of Appeal that Shirley was not authorized to sign the deed as Austin's agent, because her power of attorney did not allow that. She could not give the property to herself as a gift.

But unlike the Court of Appeal, the Supreme Court held in 2002 that Shirley signed as a "mechanical act" at Austin's direct request. When she signed she was not an agent for Austin, but only his amanuensis. The Supreme Court rejected the "formalistic notion" that an amanuensis must sign the document in the presence of the person for whom they are signing. Austin needed Shirley to place his signature on the deed, and when she did, the house became hers.