Are U.S. patents on drugs a detriment to your health?

A new book, Deadly Monopolies: The Shocking Corporate Takeover of Life Itself — and the Consequences for Your Health and Our Medical Future, says yes. In an unflinching assault on the pharmaceutical establishment, author Harriet A. Washington argues that the U.S. patent process often impedes medical advances by preventing the sharing of information, emphasizing profits over public health, and producing expensive new tests more often than new cures. Particularly egregious, she writes, is the counterintuitive ability that corporations now have, under laws that are being contested in the courts, to patent genes, tissues and other biological products. 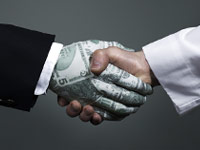 While U.S. taxpayers fund much medical research, they don't get a fair return on their investment, according to Washington. Collaborations between universities and pharmaceutical companies "have been distorted by the corporate agenda," she writes, resulting in scientifically dubious research, academic turf wars, soaring drug prices and the suppression of potentially useful medicines in favor of those with more lucrative markets. She also condemns breaches of informed consent in research and what she calls "biocolonialism," the exploitation of people and substances from developing countries.

Washington is the founding editor of the Harvard Journal of Minority Public Health and has edited news for USA Today. In 2007, her award-winning Medical Apartheid: The Dark History of Medical Experimentation on Black Americans From Colonial Times to the Present explored the checkered relationship between scientific progress and racial discrimination, detailing abuses that included the infamous Tuskegee syphilis trials and experimental gynecological surgery on black women.

When Washington realized that patents, not patients, were shaping the focus of medical research, she decided to investigate. In an interview with the AARP Bulletin, Washington talked about Deadly Monopolies.

A. Of the many ills caused by the widespread adoption of the patent, probably the worst is that, since 1980, universities and corporations have been allowed to grow too close. The Bayh-Dole Act allowed universities to sell corporations patents on molecules that have been discovered with our tax dollars. Corporations then undertake to mine the maximum dollar amount from us. Basically, we're paying twice. And it's primarily older people who are affected by the astronomical and unwarranted costs of medication.

Q. So this is largely a financial issue?

A. It's not just financial. It's the fact that universities are now satellites of corporations, focused on money, and no longer focused on good patient care.

Next: What about the high costs of developing new drugs? >>

Q. Why is the patenting of genes and other biological products particularly problematic?

A. When you patent things that come from our body, corporations become our biological landlords. In terms of individual autonomy and freedom, I find it really repugnant. Is it right to take tissues and turn around and charge people for patented entities they need to live? I'm not saying corporations shouldn't be able to charge people — I'm taking issue with the high costs.

Q. What about the high costs of developing new drugs?

A. Most are really marketing costs. Really [pharmaceutical companies] are charging us the amount of money people are willing to pay to stay alive.

Q. What's an example of harm caused by a biological patent?

A. Look at the case of Myriad Genetics. Women who have breast cancer, or are at risk for breast cancer, pay Myriad almost $4,000 for a test to elucidate their risks. It's a lot of money. But the test is not perfect — it will not find every risk. Yet you can't get another test. Myriad holds the patent for the BRCA1 and BRCA2 genes, which no researcher can use without getting Myriad's permission, which Myriad tends not to grant.

Q. Is the situation different elsewhere?

A. Canada decided to ignore the patent and flout the law because their health minister said this is too dangerous to women. Some countries take these kinds of stands. In this country, however, we tend to honor patents.

Q. But the Myriad patent is being challenged in U.S. courts. What's happening?

A. The patent was invalidated last year by a federal court. Last month [July 2011], an appeals court reinstated it. It's going to end up in the Supreme Court, if the Supreme Court will hear it.

Q. What have you learned in researching the book that's been most surprising?

A. People are going to be surprised that medical researchers themselves have been prevented from pursuing their interests — like Chris Parish of Australia, who for years was working on a drug for liver cancer. His commercial partner, Progen Pharmaceuticals, shut down the trials. They, of course, own the patent. Here this man had invested 20 years of his life in this badly needed drug. The company had learned other companies were launching a cancer drug at the same time. There would have been too much marketplace competition.

Q. Why do you think so many medical researchers have allowed the profit motive to trump their own values?

A. What choice do they have? The academic system is now inextricably linked to the corporate system.

Q. What have some of the consequences been?

Next: Is the FDA a corrupt agency? >>

Q. Does the spate of drug approvals that have been withdrawn recently suggest there is a problem with the Food and Drug Administration?

A. There is. A lot of these drugs were fast-tracked originally. The larger problem is commercial. Where does the FDA get money to evaluate these drugs? Forty percent is from makers of drugs, which I see as a conflict of interest. A lot of these drugs should never have been approved in the first place. FDA evaluators often warned from the very beginning that the drug was harmful, and they have been ignored.

Q. Are you saying the FDA is a corrupt agency?

A. I didn't say that, but somebody could easily infer that from the book.

Q. There are a lot of villains in Deadly Monopolies. Who are some of the heroes?

A. One of the heroes is U.S. Sen. Charles Grassley [R-Iowa] — a very impressive person. I spoke to him last year, and the whole time, I kept thinking of that movie Mr. Smith Goes to Washington. There have been quite a few medical research abuses that he has pointed out.

A. When Northfield Laboratories tested their blood substitute, PolyHeme, Grassley became very concerned about the law that said that Americans can be enrolled in medical research without their knowledge and consent in the case of trauma. He has had much better success in going after people who've taken money from corporations, then lied about it.

A. Bill Gates and the Bill Gates Foundation. They are focusing on the development of medical miracles to benefit people in the developing world — and, more to the point, inspiring other people to do the same.

Q. Why should we care about biocolonialism?

A. Biocolonialism is the exploitation of people and living things in the developing world solely to meet the needs of affluent people in the Western world. First of all, we should care about this because they're human beings. We should also care about this because of medical interdependence. The spread of HIV should have taught us that no catastrophe that strikes part of us leaves the rest of us unaffected.

Q. It seems extraordinary that Western companies have been able to patent — and control access to — substances already in use elsewhere.

A. Amazing, isn't it? I call it the theft of the intellectual property of the developing world.

Q. Are there efforts to address any of these issues legislatively?

A. Xavier Becerra [D-Calif.] and Dave Weldon [R-Fla.], two congressmen, introduced a bill to ban gene patenting. It didn't make it out of the House. Pharmaceutical companies are going to fight it tooth and nail.

Q. What other measures do you favor?

A. We should repeal the Bayh-Dole Act. It has proven to be deleterious for health care. The profit motive has supplanted the university research culture, with the result that our medications are for more trivial illnesses and are more expensive.

Q. What can readers do?

A. There are many points of action: The law that allows medical research with trauma patients needs to be rolled back. So, in my opinion, do laws that allow tissues and organs to be taken after death without consent. Support the organizations that are working to address some of these problems.

A. The American Civil Liberties Union and the Public Patent Foundation, which coordinated the legal challenge to BRCA genes; American College of Medical Genetics; the Association for Molecular Pathology; the College of American Pathologists; the American Society of Clinical Pathology; Breast Cancer Action; the Boston Women's Health Book Collective. California congressman Xavier Becerra introduced anti-patent legislation in the past and is considering doing so again. He should hear from people who are concerned about the marketing of life, no matter what state you live in.