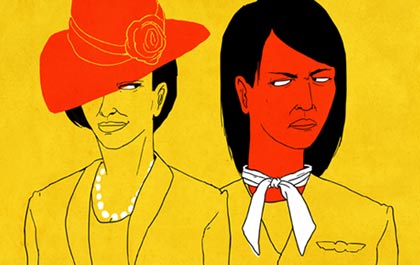 Shortly after Haywood Smith's novel The Red Hat Club was published, it became a hit, rising to the New York Times bestseller list. But the book made the author's friend, Vickie Stewart, absolutely furious.

A tale of woe

Haywood and Vickie Stewart, who was 57 when the book was published, had been friends since childhood, growing up together in the Buckhead neighborhood of Atlanta. The trouble started because Vickie's adult life had taken dramatic turns — and Haywood knew it.

Vickie's husband died tragically in a car accident in the early 1980s. She received a large insurance settlement from the accident for herself and her two children. Shortly after, she met Harold Stewart, a nursing home owner from Florida.

According to court documents, Harold was a two-timer, but Vickie didn't know it and she married him. After he became her husband, Harold stole Vickie's insurance money and moved to Florida. Vickie divorced Harold, and a county court judge in Georgia ordered him to pay $750,000.

But Vickie had no way to collect the money unless she could catch Harold in Georgia and have him arrested for contempt of the court's order. Vickie advertised in Florida newspapers offering a reward to anyone who could provide information on when Harold might return to Georgia. Five years after her divorce, now 50 years old, Vickie became a flight attendant.

SuSu lost a husband, with a name similar to Vickie's first husband, in a car accident and ended up with a new husband much like Harold, whom she divorced. SuSu also received an unenforceable order from the divorce court, and became a flight attendant.

SuSu also had unflattering characteristics. She is an out-of-control alcoholic, who drinks during flights. She has sex with "stud puppies" and married men, dresses provocatively, acts rude and crude, and is labeled as a "right wing reactionary" and atheist with an awful temper.

Vickie realized that SuSu was based on her as soon as she read the book. She was "upset, hurt and shocked," according to court records, by SuSu's story line. Her childhood friends gossiped about how closely SuSu matched Vickie. One friend said in her deposition that the book made Vickie look "awful" and "like a tramp."

Vickie sued Haywood for defamation of character in the Hall County State Court in Georgia. Vickie argued that her real life circumstances and the supposedly fictional adventures of SuSu were so similar that they would lead a reasonable person to conclude that the character SuSu is Vickie Stewart. Vickie also claimed that by showing SuSu as an "alcoholic slut" who drinks on the job, Haywood had defamed her.

But I did it for art

Haywood had admitted knowing Vickie's story before she wrote the book. Vickie's stories were "really good," Haywood said, and Vickie was "imaginative and gutsy" when trying to track down Harold. She had used Vickie's story to "help create the character" of SuSu, Haywood told the court.

Haywood said that Vickie had told her she could use the information for her book but that she also had made up the part of SuSu's character that involved unsavory behavior. Haywood claimed to have no knowledge of Vickie's drinking or sexual habits and had used characteristics of other people — not only her former friend's — for the SuSu character.

SuSu and Vickie had many differences, said Haywood, including their names, friends' names and their activities, like membership in the Red Hat Club. Haywood argued that the book was fiction, portraying "outlandish" and "implausible" antics by the characters. No one could be defamed because no one would believe that anything in the book could be true in real life, she told the court.

Should Stewart be allowed to sue for defamation of character? How would you decide? (Read verdict.) 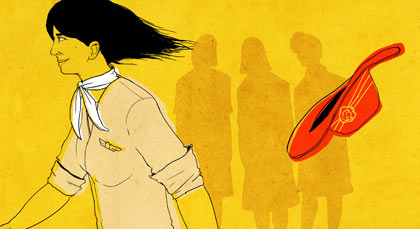 The Hall County State Court denied Haywood's plea to dismiss the case. When the Georgia Court of Appeals reviewed the decision, it explained that to prove defamation, the "false or defamatory statement" must be about the person bringing the lawsuit. Vickie had to show that people who knew her, or knew of her, "could reasonably have understood that the fictional character was a portrayal" of her.

Although Haywood argued that no one would have thought that SuSu could be a real person, the Court of Appeals disagreed. Vickie and SuSu had many similarities, it wrote, including the habit of being late and chain smoking, and the description of their hair color and childhood homes. Haywood argued that the differences between Vickie and SuSu were significant and clearly showed that Vickie is not the fictional character.

But the court held that the question of whether a reasonable person could conclude that Vickie was SuSu is a question of fact for a jury. The Court of Appeals sent the case back to the lower court for a jury trial.