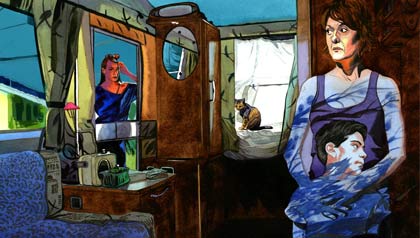 Should sole custody of the abused grandchild be given to the grandmother?

Rachel Willhite got pregnant when she was a 15-year-old high school student living near Shreveport, La. After a year of living with her mother, Jane, Rachel dropped out of 10th grade, got a job at a Waffle House and took her son, N., with her to live in a trailer with her sister. Jane followed, moving into the trailer next door. A few months later, after Rachel had an argument with her sister, she moved back in with her mother, who spent a good deal of time babysitting her grandson.

See also: Help with caring for a grandchild?

Although Rachel cared for her son and took him to day care, court documents reveal that she smoked marijuana and watched pornographic videos with friends while N. was in the room. Christopher Schopp, N.'s father, also spent time with his son. During one outing with Christopher, 4-year-old N. was raped by Christopher's 13-year-old brother. After the ordeal, Rachel and her mother took N. to the Gingerbread House, a nonprofit serving abused children, for counseling, but Rachel pulled him out when she thought the counselors weren't helping her son. Christopher fell far behind in his child support payments, and N. showed increasing signs of ADHD, bad temper and sullenness, and learning difficulties.

When N. was 6, Rachel met a new boyfriend, Jose Cirilo Perez, a horse groomer at Louisiana Downs. Jane didn't like Jose. According to court documents, she believed Jose took drugs, including marijuana and ecstasy, liked to fight and may have physically abused Rachel. After arguing over Jose, Jane and Rachel stopped speaking.

Then, one day at the trailer park, Jane called Jose a "loser" to his face. He threw a metal child's toy at her, and Jane called the police. Jose spent two months in jail, partly because of his prior convictions for felony theft. Shortly after, Rachel moved out of the trailer and into a subsidized apartment nearby.

Next: An angry grandmother. >>

Jane continued to help care for N. When he was 8, Jane heard that he was "acting out" and had been kicked out of after-school care for anger issues. Not long after, N. said that Jose, by then out of jail, had chased him and his mother down the street with a carving knife. N. said that he and his mother fled to a nearby convenience store and hid behind a drink cooler. Jose threw a beer bottle at them, and when they got back home, Jose kicked the door in. Rachel said that N. was making things up, but Jane had heard enough.

Jane was in her mid-50s and already caring for another developmentally disabled grandchild, but she filed a petition to gain sole custody of N. She said that her daughter was a high school dropout, was a menial worker and had a string of loser boyfriends. Jane said that Jose was abusive and that Rachel refused to let N. get the help he needed at Gingerbread House. N.'s special-education teacher supported Jane's argument, testifying that the boy was "shy, withdrawn, angry, and was a discipline problem." N. was failing every subject in school, Jane argued, and needed the stability and wholesome environment she could provide.

Rachel argued that she deserved to keep custody of N. She claimed to be doing much better, telling the court that she had a job at a Kroger store, N. had improved at school and she hoped to get an apartment with Jose soon. Christopher, N.'s father, testified that Rachel was a good mother, that her home was "alright" and that N. was hard to control. Rachel testified that, without much help from Jane, she had provided virtually all of N.'s day-to-day care despite the challenges of raising an ADHD child. She was N.'s mother, and she wanted to keep her son.

Should Rachel or her mother have custody of N.? How would you decide? 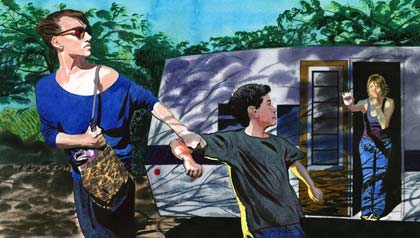 The court ruled in favor of the mother of the abused child.

The District Court found "some negative evidence against the mother in the past some years ago," but relied on Rachel's current situation to make its decision. Giving great weight to a parent's right to custody, the District Court denied Jane's request. Jane then appealed to the Court of Appeal of Louisiana, 2nd Circuit.

The Court of Appeal noted that a parent's right to custody can only be taken away for "compelling reasons." Rachel had "faced daunting challenges in life," the court said, although for the past eight years she had provided a stable home life for N. The court also acknowledged that Jose had a past record of bad behavior, but held that it was not substantiated. The judges agreed with the lower court that the evidence against Rachel was "stale" and did not prove that N. would suffer substantial harm in Rachel's care. Jane's petition for custody of her grandson was denied.