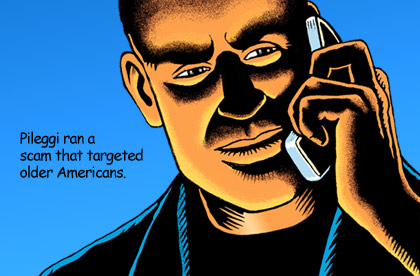 Giuseppe Pileggi, a 50-year-old Canadian citizen, led an elaborate sweepstakes scheme from San José, Costa Rica, where he was living. The scam targeted American senior citizens with a telephone pitch that claimed to be coming from either a U.S. Customs official or another official with the government. Using special technology, the fraudsters made calls from Costa Rica that appeared to have the Washington, D.C., area code. They told the targets of their scam that they had won prize money in a foreign sweepstakes and needed to wire funds to Costa Rica as an insurance fee. This fee, upward of $1,000, would be refunded, they were told. If the victims sent the money, they would often receive a second call asking for more. None of the money was ever returned.

Costa Rican authorities found evidence of the fraud after searching Pileggi’s home and car accessory business, along with 14 other sites, including call centers, which operated out of houses. Pileggi and his co-conspirators had defrauded victims of $8,381,962 between April 2003 and May 2006. According to a U.S. Customs news release, more than 2,000 victims bought into the scam and lost money.

Costa Rican authorities held Pileggi in jail until the United States government reached an agreement with the Costa Rican government over his extradition. Costa Rica wanted assurances that Pileggi would not be subject to the death penalty or life imprisonment.

The United States agreed and signed a formal communication to the Costa Rican government. Accompanied by federal marshals, Pileggi left Costa Rica bound for a federal district court in North Carolina. On Jan. 31, 2008, a jury convicted Pileggi on multiple counts, including mail fraud, travel fraud and wire fraud. His sentencing was set for Sept. 24, 2008.

When it came time for the sentencing hearing, the Justice Department attorney told the court that the United States had given “a sentencing assurance to the government of Costa Rica that we would not seek a sentence in excess of 50 years.” The attorney also noted that the government was not seeking the death sentence. But in arguing for a tough sentence the attorney said that Pileggi had committed “a crime so extraordinarily heinous” that it warranted a 50-year sentence.

The district court agreed and sentenced Pileggi to 600 months (50 years) in jail, followed by three years of supervised release, noting that it “just [did] not believe a man that could target elderly individuals and deprive them of their life savings [would] be a productive citizen at any time in his life.” Pileggi was also ordered to forfeit $8,381,962 to the United States and to pay restitution of $3,952,985.

Pileggi appealed to have his sentence overturned, arguing that it was unreasonable because the court had relied on wrong information. The Justice Department misstated the facts to the court, Pileggi argued, when it explained the diplomatic agreement between Costa Rica and the United States by saying that the agreement prevented a sentence in excess of 50 years. If the court had heard the actual language of the agreement, which stated that Pileggi would not get “life imprisonment,” it would not have given the 50-year-old Pileggi what amounted to a life sentence. The court only had to consider mortality tables to realize that Pileggi was unlikely to outlive his sentence of 50 years.

How would you decide? Was Pileggi sentenced fairly? 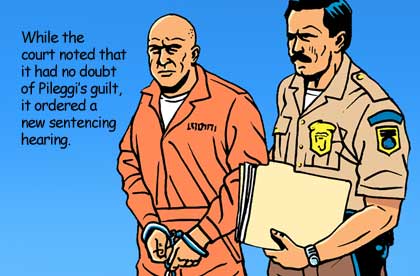 The U.S. Court of Appeals for the Fourth Circuit noted that the United States had provided the Costa Rican authorities with assurances that the suspects, including Pileggi, would not receive the death penalty or a sentence that requires spending the rest of natural life in prison. Attorneys for the Justice Department, the court said, then inadvertently misstated the agreement to the district court by saying that “the executive branch will not seek a sentence in excess of 50 years or death.” The error, the court went on, was never corrected.

The only time 50 years, specifically, was mentioned was during the Justice Department attorney’s explanation of the agreement between the two countries. This led the district court to rely on clearly erroneous facts and impose a sentence that would extend beyond Pileggi’s life expectancy.

Because of the U.S. government’s misrepresentation, the court ruled, “we have zero confidence that had the district court known the true content of the assurances provided to Costa Rica, it would have sentenced Pileggi to 600 months in prison.”

While the court noted that it had no doubt of Pileggi’s guilt, and was aware of the seriousness of his crimes, the district court’s sentencing error was “a fundamental affront to the fairness and integrity of judicial proceedings.” The court ordered a new sentencing hearing for Pileggi.