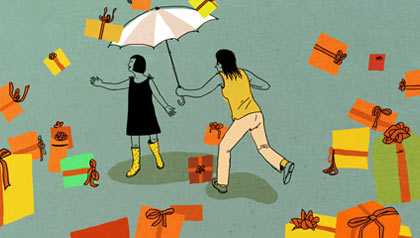 Can the court revoke the grandparents visitation on the word of the children's mother?

Karen Butler met Charles Erik Harris in San Diego in 1993 and married him a few months later, in January 1994. Karen, a helicopter pilot in the Navy, quickly became pregnant. The baby was due in late October, but Karen left Charles 10 days before she gave birth. After her daughter, Emily Hope, was born on Oct. 26, 1994, she stayed with friends, in hotels and with Harris' parents, Charles Jr. and Leanne Harris, before moving into a shelter for battered women.

In January 1995, Karen Butler filed for divorce. According to court documents, she claimed that Charles had hit her in the head, pushed her out of a dinghy into San Diego Bay and kicked her in the stomach when she was six months pregnant. In court, Charles denied the accusations, but did admit to smoking and selling marijuana and using crystal methamphetamine. He also admitted to striking and biting Butler on several occasions, but said she took part in the fights, too.

By July, Karen had gained sole custody of Emily, and moved from California to Maryland with her daughter. Charles was allowed supervised visits as long as he agreed to counseling and drug testing. His parents, Emily's paternal grandparents, wanted visitation as well. They agreed not to interfere with Karen's move to Maryland, and the trial court granted the Harrises limited visits with Emily.

Emily's grandparents visited her in Maryland three times over an 18-month period before asking Karen for unsupervised visits. Karen refused and went back to court to terminate the Harrises' visitation rights.

The trial court not only turned down Karen's request, but also gave the Harrises the right to unsupervised visits with Emily. But when the Harrises tried to contact Karen to set up a visit with Emily, mother and daughter had disappeared.

After hiring a private investigator, the Harrises tracked Karen and Emily to Brigham City, Utah, where Karen had married Mark Butler, a widower with six children.

The trial court ordered Karen to allow the Harrises their visitation sessions in Utah. Then, in February 1999, the Harrises went back to court to ask if they could bring Emily to their home in California and for overnight visits with her in Utah, which were granted. When Emily started school in August of 2000, her grandparents again went to the trial court to modify their visitation so they could see Emily on holidays and in the summer. They argued that they loved and adored Emily and had taken "extraordinary steps" and shown a great commitment to their relationship with her. They feared that Karen would not let them see their granddaughter without the court's intervention.

Karen responded by asking for an end to court-ordered visitations. She said it was "disruptive and intrusive" to her new family. The Harrises showered Emily with gifts, Karen argued, which created tension. Karen and Mark could not afford to keep up with the Harrises' gift giving for all the children. Karen also said that the Harrises complained if Emily shared her gifts with the other children, which ran counter to the values Karen was trying to teach her daughter. The Harrises, Karen said, "constantly remind Emily she is a Harris, not a Butler." As Emily's mother, Karen argued that she should have the right to decide on the Harrises' visitation, not the court.

Should the Harrises be allowed to see their granddaughter? How would you decide? 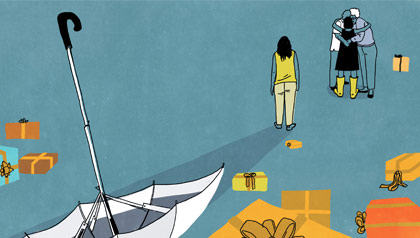 The court ruled in favor of the grandparents.

The case caused a great deal of judicial disagreement. The trial court ruled against Karen, saying that "it is in the best interests of the minor child that the paternal grandparents continue to be involved with [her]," and specified a visitation schedule. The court said the Harrises seemed to "truly love this child and … they want to continue to have that relationship." The trial court felt that there was no "realistic possibility" that Karen would encourage the relationship between Emily and the Harrises without court intervention.

Karen appealed the decision to the California Court of Appeals, which reversed the trial court, saying that "a court cannot reject the parenting decision of a fit parent and substitute its view of what is better for the child simply because it believes it is desirable for a child to maintain contact with his or her grandparents." The Harrises appealed this decision to the California Supreme Court.

According to Leanne Harris, with the case headed back to the trial court, Karen decided that, for Emily's sake, the families should work out an agreement. The Harrises had spent more than $100,000 over the years fighting for the right to see their granddaughter.

Emily, now 16, has visited the Harrises over the years. Leanne Harris says they have a strong relationship.

You may also like: Grandparents ride seesaw over visitation rights. >>