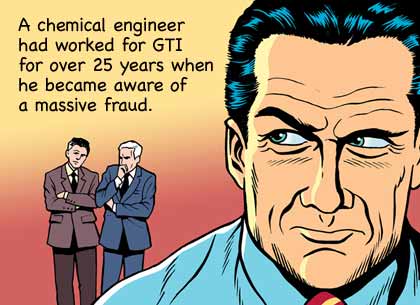 Editor’s note: Hear Ye! Hear Ye! explores a real court case. Read about it below and decide how you would rule. Then read the actual verdict and let us know whether you agree.

Anil Goyal, a chemical engineer, had worked at the Gas Technology Institute (GTI) in Des Plaines, Ill., for more than 25 years when he became aware that two of his superiors were committing a massive fraud. On Oct. 17, 2002, he went to John Riordan, the president of GTI, and told him about the scheme. Goyal, now 58, told him two employees were funneling more than $4 million of federal research funds to sham subcontractors. These contractors kept 10 percent of the money and kicked back the rest to the two GTI employees.

GTI investigated Goyal’s allegations, and the employees—Tony Lee and Peter Barone—were fired in January 2003. Uncovering the fraud created additional civil litigation between GTI and other business entities, as well as a federal indictment against Lee, Barone and a third GTI employee, Amir Rehmat. Lee and Rehmat pleaded guilty to the charges. Barone died in 2008.

Eight months after the fraud was exposed, GTI suspended Goyal for poor performance, claiming he was a “prickly, pushy, paranoid employee who believed he could behave in any manner he wanted … and then hide behind the fact that he had blown the whistle on the … fraud to avoid the consequences of his own behavior.”

GTI offered Goyal a severance package, but he refused. He was fired on March 9, 2004.

Goyal sued GTI, claiming it violated federal and state laws protecting whistle-blowers by firing him in retaliation for exposing the fraud. The GTI claims of poor performance, Goyal said, were simply pretexts for getting rid of him. Any tensions between him and other employees, Goyal argued, were due to his demands that they meet deadlines and be accountable for untimely or low-quality work.

Goyal told the court that all of his performance reviews prior to the whistle-blowing were positive. Barone, later implicated in the fraud, rated Goyal 5.9 out of 10, and said he was “truly an asset” for the company. Other scores on his prior evaluations were consistently between 7 and 8. Written comments concerning his performance were positive, including those relating to interpersonal relationships, all proving, according to Goyal, that he was fired for a reason other than his performance. He demanded GTI pay him damages for wrongful firing.

Or a difficult employee?

GTI did not dispute Goyal’s prior evaluations, but argued that his behavior changed drastically after the whistle-blowing. Goyal became increasingly difficult to manage; he belittled colleagues, interrupted people at team meetings, and was “rude, accusatory and belligerent,” GTI argued. GTI also claimed that Goyal had received refunds for travel expenses that were not legitimate.

Goyal was terminated for those reasons, GTI claimed, which had nothing to do with his whistle-blowing. The company asked the court for “summary judgment,” a procedure that would mean dismissing Goyal’s claim without a trial.

Was Goyal wrongfully fired by GTI? How would you decide? 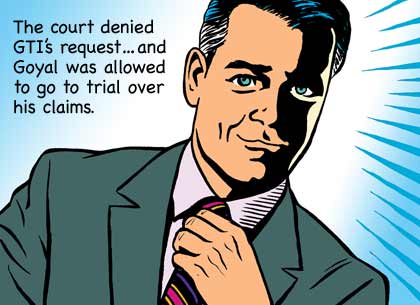 The U.S. District Court for the Northern District of Illinois, Eastern Division, explained that Goyal had to prove that his discharge was at least partially motivated by GTI’s desire to retaliate against him for his whistle-blowing. GTI argued that no reasonable jury could find that it terminated Goyal in retaliation for that activity, so the court should grant summary judgment, a court ruling based on the evidence submitted without a full jury trial. To stop summary judgment, Goyal had to show that there were disputes over why he was fired, and that a jury would be needed to determine what was true.

The court also found that the accusations over Goyal’s travel expenses raised questions about GTI’s motivations. Although Goyal was confronted with the allegedly improper travel reimbursements in October 2002, it was not until June 2003—after the two GTI employees were fired—that GTI took any further action.

At that point, Goyal was also being accused of poor performance. The court found that the timing of this charge by GTI against Goyal also raised questions of whether the travel accusations were a pretext to mask that Goyal was being fired for his whistle-blowing.

The court denied GTI’s request for summary judgment, and Goyal was allowed to go to trial over his claims. After extensive negotiations with GTI, Goyal settled his case in April 2009—before trial—for $1.3 million.