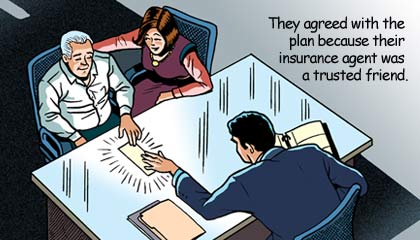 Editor's note: Hear Ye! Hear Ye! explores a real court case. Read about it below and decide how you would rule. Then read the actual verdict and let us know if you agree.

Joy and Ralph Morehead lived on the coast in the small town of Newport, N.C., where they ran a successful satellite and electronics business. Disaster struck when Ralph, then 71, learned that he had severe chronic obstructive pulmonary disease, an often fatal illness. Joy, who was 65, said she was “out of her mind with worry.”

The Moreheads were paying a $352.58 monthly premium on Ralph’s group life insurance policy with Southwestern Insurance. When their insurance agent heard about Ralph’s illness, he told them about a way that would help them through a financially difficult time. Using a process called “viatication,” Ralph could sell his $100,000 policy and forfeit the future benefits of it in exchange for an immediate cash payout.

If they sold the policy, Joy would no longer be the beneficiary, but they would receive a lump sum as soon as a buyer for the policy could be found. Joy said they agreed with the plan because their insurance agent was a trusted friend. “We were too upset about Ralph to really understand what we were doing,” Joy said. “I thought I would still get part of the $100,000 when Ralph died.”

Using a broker, the Moreheads’ agent put their insurance policy out for bids to viatical investors. The highest offer came from the Robin Hood Group, an Illinois-based viatical settlement provider. Robin Hood represented a group of seven investors willing to pay $21,000 for the policy.

In exchange for the money, the Moreheads signed the insurance policy over to a trustee, Fewkes Management, who would handle paying the Moreheads and would manage the policy for the benefit of the new investor beneficiaries. As long as Fewkes Management continued to pay the monthly premium, each of the investors would receive a share of the full $100,000 benefit when Ralph died.

Two years after completing the viatical settlement, Ralph Morehead succumbed to his illness. Before Southwestern Insurance would pay the seven investors in the Robin Hood Group, they notified Joy that they were going to court to verify who should receive the $100,000.

In the courthouse, Joy finally understood that she was not going to get any additional money from Ralph’s policy. She also learned that Robin Hood and Fewkes were not licensed to conduct business in North Carolina as viatical settlement providers. Also, Robin Hood was required by North Carolina law to give Ralph a brochure explaining the process of viatical settlements, but they had not done so. Joy felt she had been duped and brought a lawsuit against the Robin Hood Group and Fewkes Management for unfair and deceptive trade practices. She asked for a judgment giving her $30,000 of the $100,000 policy, agreeing that the rest would go to the investors who had been paying the premium.

Too little, too late

The Robin Hood Group and Fewkes Management argued that the Moreheads had not raised any objections to the viatical contract at the time they signed it, and it was too late for Joy to come back and say that she was the rightful owner of the policy. Although they were not licensed in North Carolina, Robin Hood said that this was a minor mistake and should not void the contract.

Should Joy Morehead receive the benefits of her husband’s life insurance policy? How would you decide? 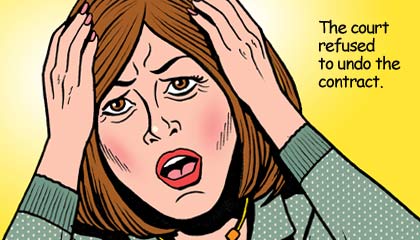 The United States Court of Appeals for the Fourth Circuit noted that Joy Morehead was relying on the North Carolina law stating that “unlicensed persons who contract to provide services for which a license is required may not recover on the contract.” But the court found that Joy was mistaken in relying on this law, which applied only to money that was still owed under a contract. In Joy’s case, the contract had been signed and the $21,000 dollars paid to her. The investors had been paying the premiums for two years. The court refused to undo the contract because that would unfairly harm the investors, and bring Joy an additional windfall.

The court also considered Joy’s claim that Robin Hood and Fewkes had committed unfair and deceptive trade practices. They were unlicensed and had not complied with other parts of the North Carolina law such as providing the Moreheads with a viatical brochure. While the court found that Robin Hood and Fewkes had committed those violations of the law, it ruled that Joy had not suffered any damages as a result.

Today, Joy Morehead has her three children and many grandchildren and great-grandchildren nearby. She knows there’s nothing to be done about Ralph’s life insurance, but cautions others, “Never sign anything unless you have someone who can explain everything to you, because it can be a scam.”