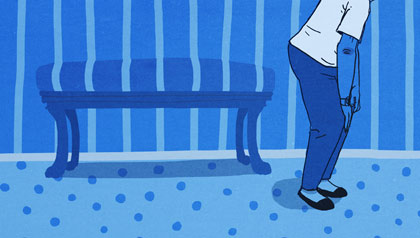 Woman injures her hip and neck falling off a casino bench that was backless, armless and upholstered to match the wall.

In March 2003 Helen Rapine, from King of Prussia, Pa., went on a trip to nearby Atlantic City. She and her two sisters, Regina and Margaret, all stayed at Harrah's Resort. Rapine, then 73, had received mailings and coupons from Harrah's, aimed at senior citizens, that encouraged visits to the full-service resort casino. After checking in, the three sisters went to their rooms on the second floor. They made plans to meet in the elevator lobby of the second-floor atrium before going to dinner.

See also: ﻿Can a passenger sue a cruise line for neglecting safety?

Rapine, a gray-haired woman in good physical shape, arrived at the elevator before her sisters, and sat down on a bench against the wall to wait. No one else was around. The backless bench was upholstered in a blue material that matched the color scheme of the wall. As Rapine settled herself, she misjudged the length of the armless bench and sat down too close to the edge. In a heartbeat, she slid off the upholstery, which was rounded over the side of the bench. Rapine's hip slammed into the floor and she banged her head.

Rapine was rushed to the Atlantic City Medical Center emergency room, where she was diagnosed with neck and hip fractures requiring surgery. Her injuries were costly and required extensive rehabilitation.

Should the bench have been benched?

Rapine sued Harrah's claiming that the type of bench and its placement created a dangerous condition for patrons like her who were invited to the casino. She argued that since Harrah's Casino actively sought senior citizens as patrons, it had a duty to take more care with the premises.

In her lawsuit, Rapine said Harrah's should never have put an armless, backless bench with rounded sides in a spot where seniors were likely to use it. Harrah's should have realized that people are distracted in a casino. Harrah's should have found a bench that had proper supports rather than one that required extra attention. Further, the bench blended in visually with the wall behind it, making it especially difficult for people whose vision might be compromised to distinguish the bench's contours. Rapine argued that Harrah's had a duty to take reasonable precautions to safeguard patrons and prevent falls such as the one she suffered. She asked for $150,000 in damages.

Harrah's said that it had exercised the proper duty of care for all its patrons. While the casino welcomed seniors as customers, the law did not require the casino to treat seniors with a higher level of care than anyone else. The bench was nearly 5 feet long and offered ample space for one person or more than one to sit without endangering themselves. While Rapine suffered an unfortunate fall, Harrah's could not be expected to guard against every accident that happened on its premises.

Next: Should the casino pay for the fall? Read the verdict. >>

At a two-day District Court jury trial in December 2005, jury members were able to inspect the actual bench. They also heard from Rapine's expert witness, George Widas, who testified that the structure, location and presentation of the bench were the reasons for her fall. About two hours after the trial adjourned, the jury returned with its verdict. The jury found that Harrah's use of the bench was not negligent and denied Rapine's claim. In March 2006 Rapine's appeal to the circuit court was denied.

In the latest redesign of Harrah's interior, no benches sit by the second-floor elevator.