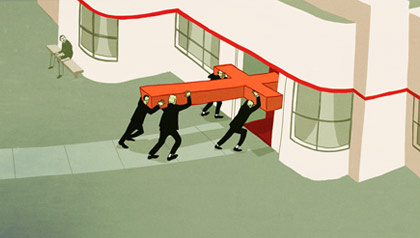 Pastor Don Kimbro of Church on the Rock in Albuquerque, N.M., had a special movie he wanted to show his older members. He asked Kathleen Stark, who ran the Bear Canyon Senior Center in the city, if he could show the film, Jesus, at her facility. The movie tells the story of Jesus Christ according to the Gospel of Luke, and concludes with a narrator stating that Jesus is the son of God, and inviting viewers to adopt Christianity and join in a prayer. Kimbro also wanted to give away large-print New Testaments at the end of the movie.

Programs for just about everything

Bear Canyon is one of six nonresidential senior centers run by the city of Albuquerque and used for many community activities. Members, who must be at least 55 years old or married to someone that age, enjoy lectures, classes, movies, crafts, bingo, dancing and exercise at the centers.

Private groups and individuals organize and sponsor many of the centers' programs, and nonmember groups can use the buildings for classes and other activities if the subject matter is "of interest to senior citizens." A wide range of subjects is listed in the activities catalog, including amateur radio, ceramics, Chinese, choral group, economics, el abuelo (the clown of Spanish culture), fishing, Medicare and health insurance counseling, myth of the hanging tree, and plants and people of New Mexico. There are also religion-related classes, like the Bible as literature; myths and stories about the millennium; theosophy; and an oratorio called A Passover Commemoration. The centers encourage ideas for new classes and programs.

Drawing the line at proselytizing

When Stark received Kimbro's request, she sent it for review to Mark Sanchez, the city's deputy director of family and community services. After viewing the film, Sanchez denied Kimbro's request, saying that city policy prohibited the use of senior centers "for sectarian instruction or as a place for religious worship."

A First Amendment argument for both sides

Kimbro and his church sued the city, arguing that he should not be prohibited from showing the film and handing out Bibles. Kimbro argued that the city had unconstitutionally restricted his right to free expression under the First Amendment; the city's reasoning for its denial of the film showing did not outweigh his, and the church's, rights under the Constitution.

City officials argued that their hands were tied. The First Amendment prohibits the state establishment of religion, and Kimbro's request would violate that basic principle by promoting Christianity in a city-sponsored forum. The city also contended that the Older Americans Act required them to prohibit use of the centers for religious teaching or worship, or risk losing federal funding. Finally, the city said that its policy protected seniors, who are a "captive audience" and "vulnerable" to the kind of proselytizing and coercion that Kimbro's program represented.

Next: Should Kimbro be allowed to show his film? If you were the judge, how would you decide? Read the verdict. 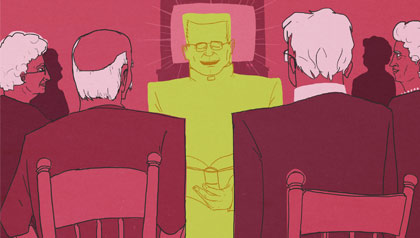 The District Court held that the primary purpose of the film was to promote Christianity, and that the city had a right to exclude the film, since its subject matter did not fit the purpose of the senior centers. But the Court of Appeals disagreed.

First, the Court of Appeals noted that speech intended to convert nonbelievers enjoys the same protection under the First Amendment as any other religious speech, including the Bible classes that were being run at the center. Quoting the Supreme Court, the Court of Appeals noted that "it is no violation for government to enact neutral policies that happen to benefit religion."

The court also held that the city was wrong to rely on the Older Americans' Act to justify their restriction. Loss of federal funds is not a "compelling government interest" that can be used to overcome the city's duty under the U.S. Constitution.

Finally, the court found it insulting to senior citizens for the city to argue that seniors would be coerced or intimidated by Kimbro's program. "People in this age group are not in need of special insulation from invitations to adopt a religious faith," the court said, adding that attendance at Kimbro's proposed presentation was voluntary.